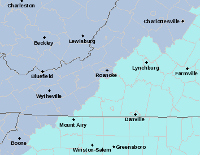 Let me start by saying that the highest temperature in the snow report today is 0 (zero), brought to you by Bryce in VA.  The coldest temp this morning belongs to Beech Mountain at -19.  This is the air temperature, it really feels like -38 at Beech right now with the wind chill.  That is dangerously cold, but don’t take my word for it – where’s what the National Weather Service has to say:

TAKE STEPS NOW TO PROTECT YOUR PROPERTY AND HEALTH FROM THE EXTREME COLD. IF YOU GO OUTSIDE… WEAR SEVERAL LAYERS OF LOOSE FITTING… LIGHTWEIGHT… WARM CLOTHING RATHER THAN ONE LAYER OF HEAVY CLOTHING. MITTENS ARE WARMER THAN GLOVES. WEAR A HAT AND COVER YOUR MOUTH WITH A SCARF.

IF DRIVING… KEEP YOUR GAS TANK NEAR FULL TO AVOID ICE IN THE TANK AND FUEL LINES. CHECK YOUR ANTIFREEZE AND WINDSHIELD WASHER FLUID LEVELS. BE SURE TO CARRY A FULLY CHARGED CELL PHONE. IN YOUR HOME… CONSIDER ALLOWING INDOOR PLUMBING FIXTURES TO DRIP TO ALLOW WATER TO TRICKLE THROUGH PIPES AND INHIBIT FREEZING. USE CAUTION WITH SPACE HEATERS IN ORDER TO AVOID FIRE OR INJURY. IF EMERGENCY GENERATORS WILL BE USED… THEY MUST BE SITUATED OUTDOORS IN WELL VENTILATED AREAS TO PREVENT CARBON MONOXIDE POISONING.

ALSO… REMEMBER TO CHECK IN ON FAMILY… FRIENDS… AND ELDERLY NEIGHBORS WHO MIGHT BE SUSCEPTIBLE TO THE COLD. DO NOT FORGET ABOUT YOUR PETS AND LIVESTOCK. MAKE SURE THEY HAVE A SOURCE OF WATER THAT WILL NOT FREEZE AND A WARM PLACE TO TAKE SHELTER FROM THE WIND AND COLD.

This is no joke, if you head out today do not have exposed skin and go inside often.

A few of the resorts are taking steps to help protect both skiers/boarders and employees.  Beech Mountain has decided to close the top of the mountain and has 4 runs open today – including the Powderbowl terrain park.  Kudos to Beech for putting safety first.  Snowshoe has also limited the open trails today to 44, in part by closing the Western Territory.  I imagine others will take similar steps throughout the day so be sure to check in with your mountain before heading out.

As many of you who follow the First Trax know, I have been at Appalachian the past couple of days for the Alpine Skiing & Snowboarding NC Special Olympic Games. 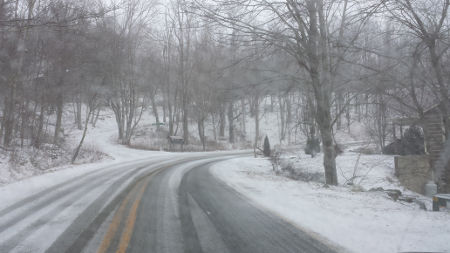 It was cold yesterday, but manageable – 15 degrees and 1 with the wind chill at the start.  The sun even tried to poke through a bit. 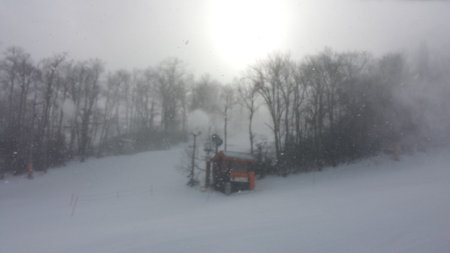 The cold did not restrict the games as the athletes were there early and inching to go.

As you can see the snow was coming down at a pretty good clip.  I left the mountain around noon and there was no sign of it letting up.

The snow conditions were really pretty good considering how cold and windy it was.  There was a nice layer of natural and manmade snow on top of some very crusty corduroy, which alerted me that it was time to sharpen my edges.  The diamond Hard Core, which is pretty well protected by trees, didn’t get the covering the main slopes did and you really had to weight your skis while you turned if you wanted any resemblance of a carved turn.   This really didn’t matter because the 3 courses they had laid out were on the green Appaltizer, and the blues Lower Big Appal and Orchard Run where they did have the guns going until about 10 in order the cover up the crust. 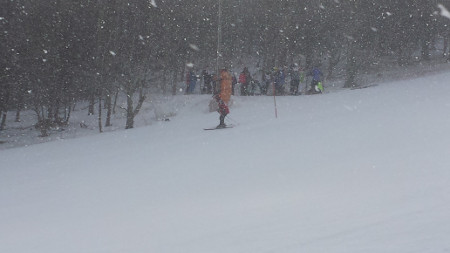 The athletes didn’t seem to mind the cold and the excitement in the lodge was pretty electric.  Congratulations to all of the coaches and athletes as well as to Appalachian Ski Mountain for another great event.

Take care out there today and be sure to cover up.  Any exposed skin will frostbit pretty quickly.  Mike Doble mentioned to me this morning that he walked outside after his morning shower and his hair froze within 30 seconds.  That is crazy cold.