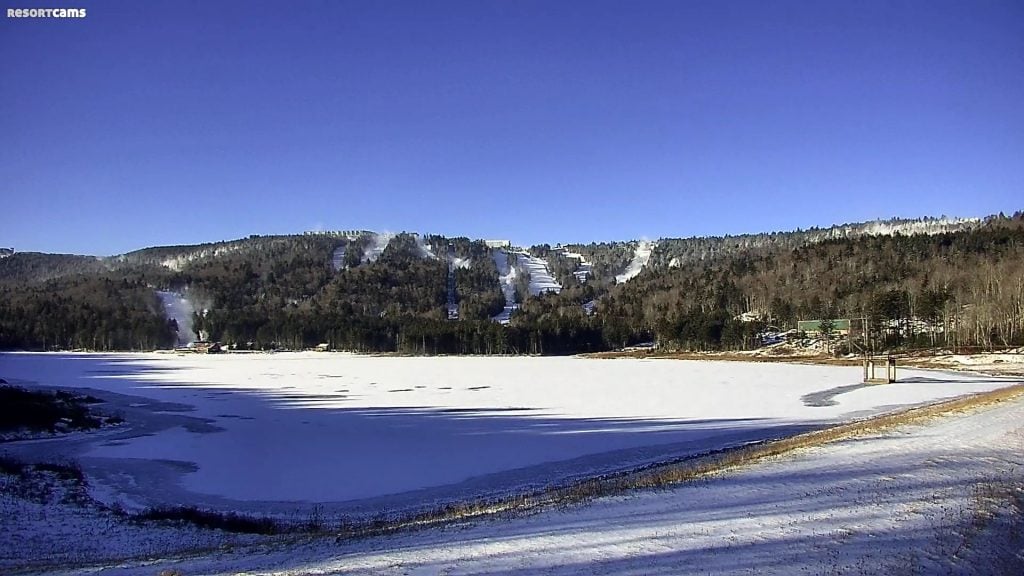 Check the SNOW REPORT for all of the particulars, complete with how much snow fell and where; what the morning low temperatures are/were and how many slopes are open at each ski area, etc.

We are NOW in the PRIME snowmaking zone – minus the crazy winds that are buffeting anything and everything that isn’t tied down. If you are planning to brave these temps and cold winds – bear in mind that there are SEVERE windchill and frostbite warnings out across all of the mountaintops today as temperatures are frigid to say the least and only getting COLDER throughout the day.

The coldest place this morning within our coverage area is also the snowiest (what’s new right?) and that is Snowshoe Mountain in “Oh My God” West Virginia. (I know that it is normally “By God WV” but you don’t know how cold it feels when it’s MINUS 2° and winds are pushing MINUS 25° wind chills?

Shawn Cassell posted, “It’s a bit nippy out there this morning… Ok, it is flat out cold! With highs expected to hang out right around 0, and wind chills as low as -25, you’re going to want to make sure to wear plenty of layers, leave no skin exposed, and take plenty of breaks. This cold front has brought another 3 inches of snow with it, so surface conditions should be spectacular today! We’re taking advantage of this prime snowmaking weather and hope to have well over 100 acres open by Sunday, including the Soaring Eagle lift.”

A quick look around the region shows you how varied our mountains of the region are in terms of elevations, proximity to how fronts enter the area. For example, late last night I was seeing 27° at my place and yet it was 15° as Snowshoe and Canaan and there was some significant natural snow falling. 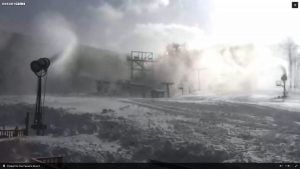 Timberline Resort is showing some SERIOUS base depths right now! The image isn’t the best due to the snowmaking, but CLICK to ENLARGE!

Yes it is running again! Thanks to Tom Blanzy and Kenny Griffin for tag-teaming some trouble shooting last night – they got it running and actually it is now STREAMING LIVE which it wasn’t before! Additionally, you can watch it pan around and show off some serious base that they’ve been able to lay down. WATCH IT LIVE!!!

By the way – I FEEL for Steve Drumheller or whoever at Canaan Valley Resort that he tasks with putting up the new STREAMING CAM today or tomorrow. (Personally I could not imagine that they’d even try to fight these conditions. Friday/Saturday is meant to be a notch milder.

Pretty much EVERY resort in the region not named Snowshoe, Canaan or Timberline – saw a TRACE to .5″ of snow in the last 24 hours and EVERY ski area is making snow like crazy.

EIGHT SKI RESORTS ARE OPEN TODAY and it would have been NINE as Bryce was previously open but they decided to close for today due to the high winds. In fact, you COULD see other resorts shut down a  lift or two depending on the severity of those winds. 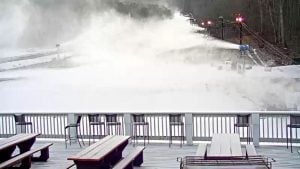 Omni Homestead is BLASTING THEIR MOUNTAIN and will open very soon. Click to Enlarge.

Tomorrow will offer FIVE MORE ski areas to open and those are Wisp Resort, Wintergreen Resort, Massanutten Resort, Ober Gatlinburg (for skiing and snow tubing) and Bryce Resort. Saturday we’ll see Sapphire Valley open and that will give us all resorts in the region operating with the exception of Timberline Resort – which plans to open on the 23rd – and The Omni Homestead Resort which may open this weekend (we just haven’t heard definitively).

A TALE OF TWO OR THREE CITIES OR TOWNS OR MOUNTAIN COMMUNITIES…WHATEVER!

One of our team was chatting with an area ski shop yesterday and he said, “Man we just haven’t had any snow and I’m wondering if we will get any.” Strangely enough, his shop does most of its business ONLINE but he’s actually located in Winston-Salem, North Carolina. When we told him that we’ve actually seen more than a foot and half of snow in some portions of the mountains, he thought we were lying.

His perception was based on the fact that he is a huge fan of one particular ski area that has only seen POINT 2″ of snow thus far this season. Actually Bryce Resort, Omni Homestead and Sapphire Valley have seen ZERO measurable snowfall yet this season.

Traditionally Beech and Sugar mountains would have seen a foot or more by this date on the calendar. Of course LAST NOVEMBER AND DECEMBER offered NO SNOW to this date, but back in December of 2014 Beech saw 23.7″ of natural snowfall by December 15th.

Massanutten and Wintergreen resorts in Virginia have the only measurable snowfall in Virginia to date with a bit more than 1″ each. Wisp Resort in Maryland has seen 4.1″. 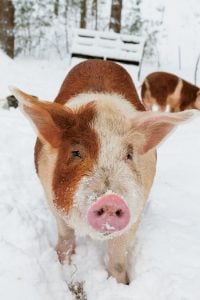 The West Virginia ski areas have been hogging all the snow!

The way things have gone thus far this season – good ole West Virginia is hogging up the “white gold” that is the best marketing tool for any and all ski resorts. Winterplace Resort in Ghent, WV has seen just a bit more than Beech and Sugar at 4″ of snow thus far and then the SNOW BELT is at Snowshoe where 14.5″ of snow has fallen so far and Canaan Valley and Timberline are the big winners with a whopping 20″ of snow.

I’m like the Winston-Salem dude – I’d like to see some good snowfall here in the High Country. I had about enough snow on my front deck this morning to put together a snowball about the size of a decent marble. Ditto that on the back deck here at our offices in beautiful “downtown” Foscoe/Boone, North Carolina. 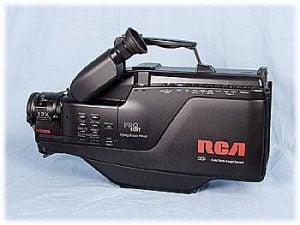 I wrapped one of these in a trash bag, duck taped it up and called it a webcam! It worked.

Most people look to us as a great resource for all things SKI, but somehow, some way, some TIME ago we got lucky and thought about WEB CAMS and WEATHER CONTENT as a “MUST HAVE” when people are planning a trip to the mountains. I’ve told this story before so I’ll keep it short this time around – but our first webcams were back about 18 years or so ago when I took and old RCA camcorder and wrapped it in a garbage bag for weather-proofing it and wired it to a computer and image capture card and broadcast the first “LIVE” images of Seven Devils and Sugar Mountain.

A short time later we debuted HighCountryWebCams.com, then LowCountryWebCams.com, GrandStrandCams.com and finally we got really smart and bought and built ResortCams.com. Those camera relationships have probably promoted tourism for our region that is second to no other resource anywhere in the region.

We will be growing that weather content even more to feature input from our featured weather gurus from around the region. In the meantime – check it out and save it as a place to find all of the information, forecasts and more.

We’re obviously in an AMAZINGLY cold snap right now. Things will then turn milder Saturday, cold again, mild again, cold again and we should see some snow between now and Christmas…with even greater chances of snow a day or so after Christmas – particular around that SNOW BELT of WV again.

We’ve been sharing some of the nicer videos that ski areas are producing and that makes me wonder WHY ALL OF THEM are not taking advantage of that awesome marketing chance.

For now…here are some REALLY NICE ONES produced recently.

Here is one of Massanutten Resort making snow yesterday!

Last but not least, we’ve been reporting about Ober Gatlinburg’s Aerial Tram and evidently some of you don’t know what that is. Also MANY have asked us WHY Ober doesn’t put a live, streaming cam up on their mountain or pointed at the TRAM. The answer is we don’t know 😉

However HERE is a nice video that someone grabbed riding the TRAM and leaving the tram station below.

OBVIOUSLY we plugged the heck out of Snowshoe opening Cupp Run yesterday, but here’s one more, sweet video of a couple of really talented peeps riding Cupp on Wednesday. Enjoy!

I think that is all the “damage” I can do for one day. Email me if you like. By the way THANKS for all the emails yesterday regarding my feelings towards Ober. Those were nice. I got a couple from Ober staffers – thanks for those as well. You guys rock! Email me at [email protected]