Continued Cold and Even Some Snow is in the Forecast 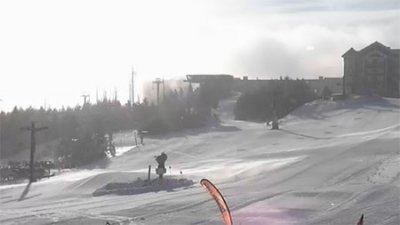 It's another frigid start to the day here in the High Country. It is really, really cold! It is a few degrees warmer than yesterday though, but that isn't saying much. A few of us here in the office went outside yesterday to play with Mike's new Parrot AR Drone 2.0 (Google it) around midday. I lasted maybe five minutes before I had to come back in. Even with it being sunny, it was freezing! I knew it was going to be cold, but it still was a shock to my system. I actually wussed out and didn't go riding at Beech last night because of the temps. It was that bad.

As I said, it's a few degrees warmer this morning.  Most of the ski areas are in the single digits and teens in terms of temperatures.  With it being so cold, they were really able to lay down some snow yesterday and last night.  When the temperatures are this cold, snowmaking conditions are pretty much perfect.

As you can see from this snowmaking temperature and humidity guide, we're in the "ideal" range.  Hence, the drastic increase in some base depths over the past 24 hours.

As a result of those prolonged frigid temps, most everyone's base depth has significantly increased this morning.  Most noticeably, Appalachian Ski Mountain went from 20-32 inches to 38-58 inches this morning.  For anyone else, I would call BS on that.  However, as we all know App has the best ratio of snowmaking equipment to size of anyone in the region so I definitely believe that base depth.  One look at the cam this morning and you can really see how intense the snowmaking is out there. 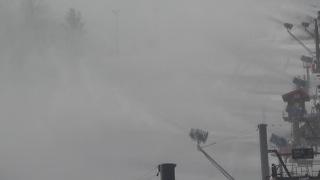 App is really cranking out some snow this morning!

There's actually a few flurries falling up in West Virginia this morning which you could see on the…drumroll….NEW SNOWSHOE CAM WOO!  I apologize if I seem a little too excited but these Snowshoe cams have been the most frustrating project.  Internet connectivity is pretty terrible up there but we were finally able to get the Shaver's Centre cam to go live yesterday.  It is pretty sweet and gives you guys a good view of the area at the top of Ballhooter.  Make sure to check it out! 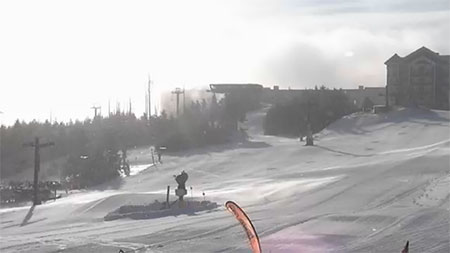 Look at that sweet grooming at Snowshoe this AM!

While I'm on the topic of Snowshoe, this is just a heads up for the dates of our annual Ski Southeast Summit at Snowshoe Mountain.  As of right now, it will be held this year on the weekend of February 22-24.  I say as of RIGHT NOW because we might be moving it back a week to the first weekend in March.  Some of our regulars have emailed Mike saying they wouldn't be able to make it in February, so I'm going to see what I can do today.  We also wouldn't mind moving it back a week because Snowshoe is hosting their first ever Armed Forces Winter Salute March 1-3rd.  They'll be having live music and all kinds of events so I'm thinking more and more it wouldn't be a bad idea to have the summit then.  Don't make any plans or reservations for it just yet.  I should have all the details for you in the next day or so but I just wanted to get the word out so people can start thinking about planning.  It's only a month or so away!

Alright, so back to the weather and what not.  The cold continues for the rest of the week.  It was pretty funny to see the phrase “stuck in the icebox” on the Charleston, WV National Weather Service weather discussion yesterday.  That's a pretty good summary of the temps up in that part of the region right now.

Everyone else will also see continued sub-freezing temperatures, meaning around the clock snowmaking through the first part of the weekend.  Some natural snow is even in the forecast over the next several days.  The weekend is looking fantastic, especially Sunday.  We might actually have “peak season” conditions by the end of the weekend.  Of course this will happen when I leave for a snowboard trip to Utah.  The jinx!

Everyone enjoy your Hump Day.  Get out and make some turns if you can.  The snow conditions are fantastic right now!  I'll talk to you guys tomorrow.