Coming at You from the Summit

Well, I’d definitely say the first day of the Ski Southeast Summit was a success, at least for me anyways.  Yesterday was probably the most fun day I’ve had all year on the slopes.  There is so much snow up here on top of Snowshoe right now.  It seriously has the vibe of out west right now with huge piles of snow everywhere.  It’s pretty obvious they’ve been getting dumped on in recent weeks.

As for the snow on the trails…it was so sweet yesterday.  A couple inches of snow fell after they groomed Thursday night, so there was a nice layer of fluff on top.  Bluebird skies greeted us which made things ever that much better.  I forgot how much fun Western Territory is.  It was nice to get the blood pumping and bomb the steeper parts of Cupp.

Here’s a panoramic shot from the top of Ballhooter from first thing in the AM.  Click it to enlarge.

The morning was awesome.

Even after that layer was tracked out the snow quality remained superb.  It was nice and chalky and crunchy.  Standing in line last night at Silver Creek it was almost comical to hear the loud squeaking sounds of boards and skis on the snow as people were moving around.

Here’s one more picture from Sawmill Glades, just because.  I don’t think I’ve ever been here before when that area has been opened. 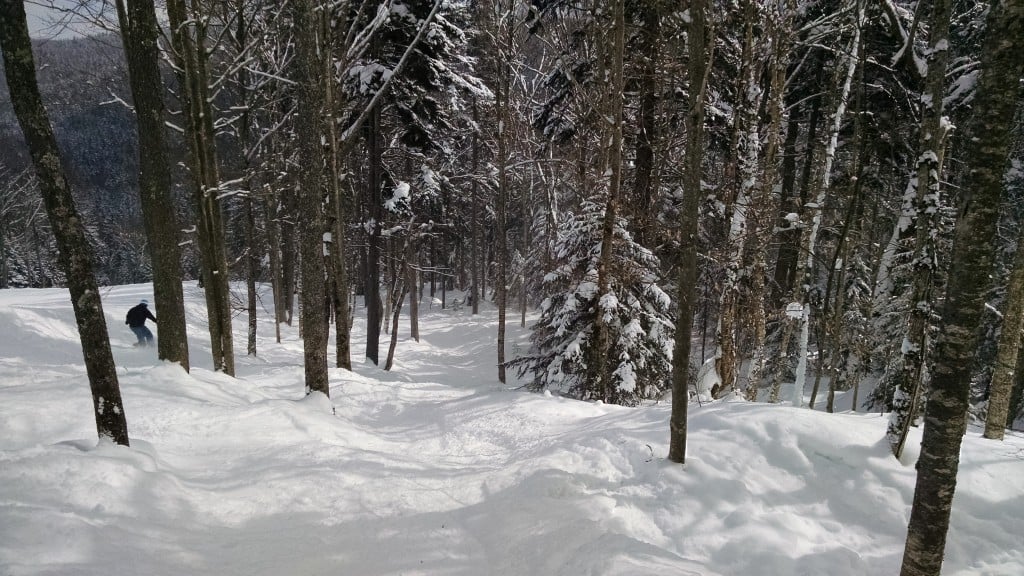 I only get to come to Snowshoe once a year, but each time I come I always am uber impressed with this place.  Today should be really fun and we’re all meeting up at the top of Ballhooter at 8:45am.  It should be another fun day of riding even though I am exhausted right now.  Rusted Root was cool last night but we didn’t get back in until late and I am regretting my decision to switch days with Mike and do the report today instead of yesterday.  I’m about to go get the biggest coffee possible from Starbucks.

If you’re not up here at the Shoe right now, sorry for the trip report.  I am just really pumped on how yesterday went and the other 100+ Ski Southeasters who made it up here are having a good time.  However, every single ski resort in the region is lined up to have a fantastic day today as well.  Perfect temperatures will be accompanied by lots of sunshine.  Now that’s a good Saturday.  Conditions are pretty much the status quo from yesterday, save for a few more lifts running since it’s the weekend.  Check out the SKI REPORT page to view all of the current base depths, open trail counts, etc.

I’m having a tough time getting some of the webcams to come up so I can see what it looks like (the wifi isn’t the greatest here at Mountain Lodge), but I did find this Facebook post from Wintergreen yesterday.  Looks great up there!

So if you’re sitting on the couch and reading this right now, get up and head to the mountains!  Everywhere from Tennessee to Maryland has an insane amount of snow on the trails right now.  I was going through all of the ski reports just a bit ago and it’s rather impressive to see how high base depths and the trail counts are going into March.  There’s only a handful of runs in the entire region that aren’t open right now.  Literally only a handful.  Out of hundreds.

I feel like giving a quick shout out to Ober Gatlinburg as they were the only resort who made snow last night.  It’s pretty cool to see them doing so on the final day of February.

Definitely get out today and get some turns in if you can because it looks like next week is a little warmer and a little wetter unfortunately.  Not the way we want to start March!  End of season abbreviated operating schedules are also going to begin for some resorts next weekend and we actually have our first closure of the season next weekend as well.  I’ll talk more about that on Monday.  Let’s not worry about that right now though and instead let’s just enjoy the awesome Saturday that lies ahead first.