COME ON MOM, YOU CAN DO BETTER THAN THIS 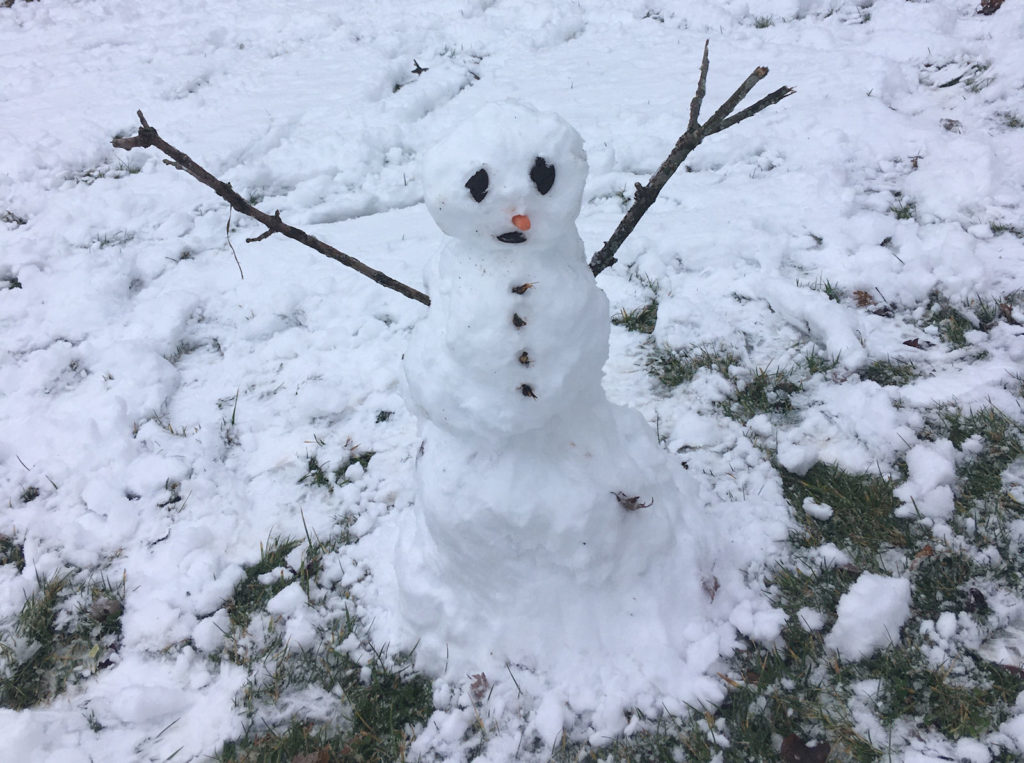 Photos and story by Joe Stevens

As I scribe this week’s column and glance out my front door, I see my some of the early flowers starting to pop up in our flower beds. This usually doesn’t occur around my neck of the woods in the middle of February, and well, that has created a whole bunch of confusion around these parts.

It was just a week ago that Christian (my 15-year old son, you’ve heard about him before in this space) and I were able to finally make our first snowman of the winter. It was a gigantic snowman (see picture) but nonetheless a snowman. Despite warming temperatures over the weekend and rain (I know, I know, under-developed snow) Sunday night into Monday morning, there was still a small part of its body visible when Christian left for school that day.

I mention this as this is basically how the 2019-2020 season has gone so far for all of the resorts in the southeast region. If you haven’t noticed, there have been times this season, when snowmaking conditions were just right for every resort to make snow and lots of it. The cold temperatures also allowed the resort’s snowmakers a chance to even stockpile snow here and there to use when milder temperatures occurred, and patching was needed.

However as we all know, if you haven’t been hiding under a rock this season, you know those extra piles have been quickly used and well, it’s been a challenge for mountain operation folks to maintain a base to get them through critical busy times. Now I am here to say, the region’s snowmakers have done the best they can with the cards they have been dealt. It’s like every time they turn around, they are having to draw to an inside straight, to win the pot in the middle of the table. But they do what they can and keep moving forward.

As there is plenty of data out there from various National Weather Service weather reporting stations showing just how up and down this season has been in terms of various weather cycles, I have another, though unscientific, way of analyzing the situation. We have a home located at 2800 feet in the southern portion of Randolph County in West Virginia, seven miles west of Snowshoe Mountain’s base. We heat with propane gas at an average cost of $450 each month from December through March. So far this year, the largest bill has been $325. That’s great for the family budget, but this provides me with the evidence that snowmakers have had their hands full this season.

Most of you that read this column also follow this site, and know that its editor Mike Doble has kept you up to speed on the lack of natural snowfall this season. Mike has provided figures from each resort showing that snowfall totals are in many cases, down over half at this time for most seasons. Two areas that I am most familiar with, Pocahontas and Tucker counties in West Virginia, the county’s that have Snowshoe Mountain and Canaan Valley resorts in them, should’ve have seen over 100 inches by this time of the season, but not this year. Both are well under the century mark through the middle of the year’s second month.

Recently I was at WSAZ-TV in Charleston – Huntington, West Virginia to do an afternoon interview about the ski season in the mountain state. Prior to my segment, the afternoon meteorologist Tony Cavalier mentioned a weather term to me that I had never heard before and that being “Snow Drought.” Now I am familiar with the drought term, but to be honest, only during the summer months when I watch our grass turn brown. But that doesn’t really bother me as I also know that means I don’t have to cut the grass as much.

After I heard the Snow Drought term, I decided to find out more about the new meteorological term for yours truly. I decided to reach out to another weatherman friend of mine and that being Brandon Butcher, the morning weatherman for the same television station. I have always respected Brandon’s forecast as he is not one of those snow gooses, giving you two to eight-inch snowfall forecasts, but narrowing it down to a more realistic one to three or two to four. Anybody can be right with a six inch range, right?

So, here is Brandon’s thoughts about the region’s Snow Drought, “Having substantially less than average natural snow for our ski resorts certainly isn’t a wonderful thing, there have been some silver linings. The temperatures these days haven’t been prone to exceedingly frigid cold snaps, allowing for would-be skiers to suffer less in that regard when heading out to the slopes. At the same time, the temperatures can still support snowmaking, allowing for resorts to still have some ability to manage their bases. So while skiers aren’t reminded of the mountains’ snow coverage, when their backyards are getting fewer flakes, they can have more confidence that the road to the slopes is clear, the temperatures are a lot more comfortable, and the snowguns are still able to churn out some powder.”

Here is a weather graph that Brandon produced showing the affects of this season’s Snow Drought: 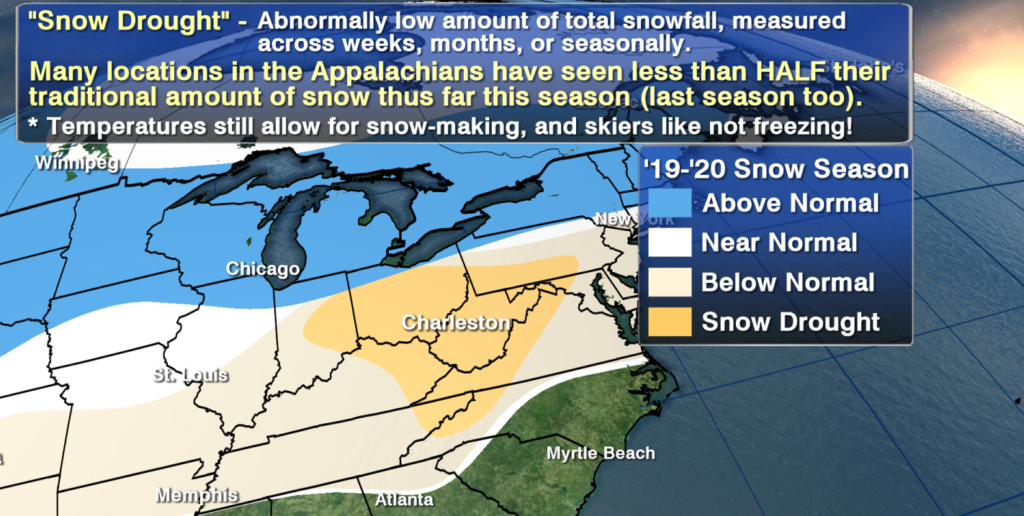 I know for a fact, skiers and snowboarders aren’t very fond of when snow is being made of open terrain, but it has been a necessity this season, to make as much snow as possible, whenever given the chance. The other night at Winterplace I overheard a young skier say that she couldn’t understand why the guns were operating (the temperature at the time she spoke was 17-degrees), I had to speak up and say “if it wasn’t for the snowmaking that was occurring, there wouldn’t be any skiing right now.” I don’t know if that made her feel any better, but I couldn’t pass up what my teacher-wife calls a teachable moment.

Here’s hoping Christian and I can make another snowman, because I know mom can do better than this. Right?

Previous Post
Who the Heck Says This Has Been a Bad Winter?
Next Post
How MUCH of a Snow Drought Have We Seen This Winter?