Coldest Morning of the Season with Up to 4″ of New Snow! 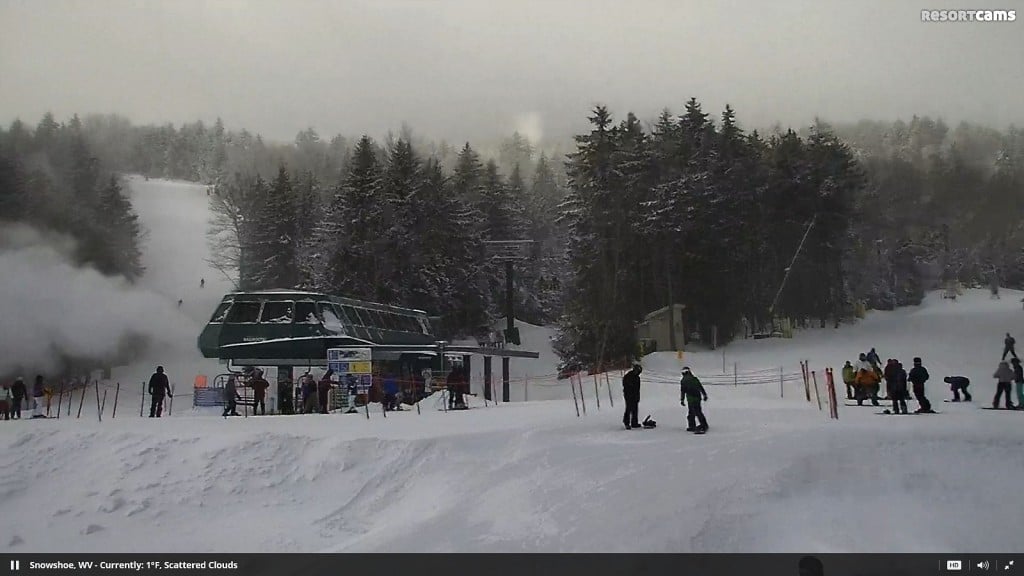 Good Monday morning to all. It doesn’t feel much like a Monday as I am posting today’s report. Kenny Griffin is under the weather today. He’s been fighting a cold for some time now and after riding at Appalachian on Saturday and then being out in the cold during the Carolina Panthers win over Seattle yesterday…he’s feeling the effects this morning.

So you guys are stuck with me again today.

I was texting a bit with Kenny on Sunday as we were experiencing snow flurries to moderate snow at times during the day. However with the sun popping in and out and with some rather strong winds at times (especially last night) you would be hard pressed to find snow more than ankle deep across most of our area although we are reporting the official snow totals across each of our mountains this morning. Beech and Sugar have seen the most snow of the NC ski areas with 3″ over the last 48 hours or so, but there’s perhaps an inch or so on the ground. Compare that to the 3.3″ to 4″ of snow that has fallen at Snowshoe, Canaan and Timberline in the last 48 hours…and there’s 7″ of snow on the ground.

The good news is that we have some natural snow on the ground across most of the ski mountains today. That and some optimal snow making temperatures have made for THE BEST ski and snowboarding conditions of the season across the entire region.

The fact that we have some snow on the ground across the entire region is big news as this has been a snow-starved season to date. However the “bigger news” today will be the raw temperatures for today as the high is expected to be in the SINGLE DIGITS across a lot of the highest elevations. Beech is expecting a high of 8° while Snowshoe Mountain and some of the West Virginia mountains may struggle to get above 5° for a high temp today.

Lows tonight may dip again to -4 to -8° so expect ski areas to make snow at least on unopened terrain. If you’re going to ski or ride today or tonight, cover ALL exposed areas of your body. There are frostbite warnings for dangerous wind chills posted across the region as well. 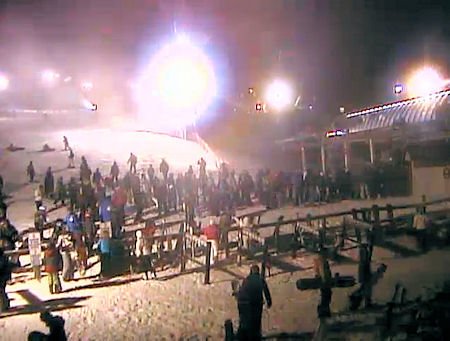 Sugar’s new 6-man lift was no match for traffic around 8pm Sunday evening.

Absolutely it has been a good one. Resorts always play this kind of information very close to the vest so we probably won’t hear anything more than something like, “It has been a really good weekend,” or “We’re really happy with the traffic this weekend”…but from what we’re seeing while it HAS been a busy weekend…we’re seeing signs that it won’t be a record-breaking skier visit weekend. I’ve been doing this website for 20 years now and simply using the “eye test” I can tell you that I’ve seen it a lot more crowded than what I’m seeing right now. For example on record visitation weekends, we can see cars parked out on Hwy 184 and over-flow to Lowe’s Hardware…whereas we’re not seeing that this weekend.

However, from all indications it has been a good one.  Here are some screen captures of lift lines and base traffic that we picked up yesterday, last night and this morning: 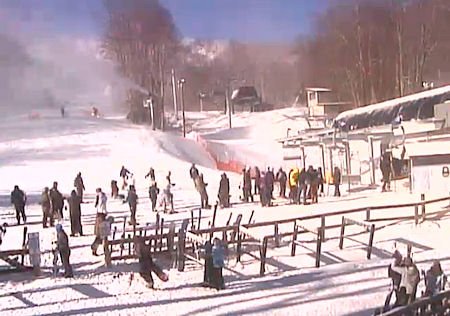 Sugar this morning at 10am 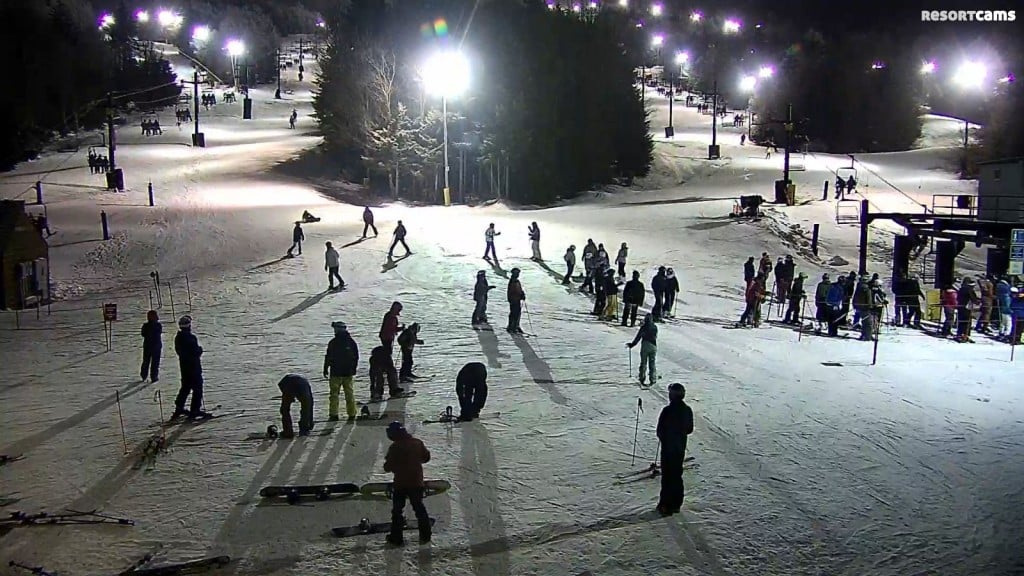 Sunday evening at Silvercreek at Snowshoe Mountain. Click to Enlarge. 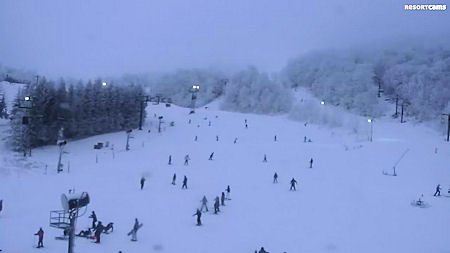 A lot of people are emailing me asking about WHEN resorts may be opening more terrain. To be honest, I’ll have to check in with some of our mountain ops people as I have been wondering that as well. I’ve actually noted that some of the ski areas have not been making snow during daylight hours when temps have allowed…even on unopened terrain so that has been a little surprising.

More than a few people have emailed us asking about the Soaring Eagle side of Snowshoe as they’ve yet to get Widowmaker, Camp 99, Sawmill or that side of the mountain open as yet. We’ll try to connect with our contacts there and see what we can find out. Ditto the same kind of queries for Wisp, Canaan and Timberline. Again, we’ll see what we can find out.

Most of the North Carolina resorts are either 100% open or really close to it. However, normally aggressive Sugar Mountain is operating with 12 of 21 so far. They DO have Oma’s, Gunther’s Way, Tom Terrific and of course the top to bottom trails of Upper and Lower Flying Mile all open. So Sugar seems to be focused on making sure that the mountain “feels” nearly all open even though they are nine trails short of being 100%.

The Virginia resorts are mostly near or at 100% with the exception of Wintergreen’s 16 of 25.

West Virginia’s ski areas are causing the most emails questioning us about open terrain. However, you have to consider that just a short two weeks ago VERY LITTLE was open at all. So we’re kind of in an early-season-trail-opening mode even though it is mid January.  The good news is that we still have a lot of ski season left as we are only about one-third of the way into this season. So ski areas may be protecting themselves against a thaw…and focusing on the MAIN terrain.

There’s a LOT of cold air and some good snow in the forecast so we kind of think that more terrain will open this week for this coming weekend.

However, as a quick glance…here is where we are right now by State:

The 24 hour snowfall totals on today’s report are actually more of a 24-48 hour total. The way this storm fell it’s really been a slow accumulator and with the winds you’d be hard pressed to find a half inch in some areas.

Frostbite warnings are in effect for today and tonight.

Canaan Valley Resort – minus 5° – 4.1″ of new snow – 11 slopes open and terrain park and tubing open as well. Day sessions only.

Timberline Resort – minus 5° – 4.1″ of new snow – 18 slopes open and awesome conditions for day sessions only today.

Heavier Snow in the Forecast?

We’ll let Meteorologist Brad Panovich give us the full forecast…but in addition to some amazingly cold temps for the entire week ahead…we’re seeing some really good chances for 1-2″ of snow from now through Thursday of this week and then some significant snow possible for Friday.

Right now it looks like 5-7″ of snow for some of the higher elevation with perhaps even more significant snow than that. We’ll keep an eye on that one, but we’re hear to tell you that if you have not visited your favorite ski mountain yet this season, you should make reservations for this week and weekend…right NOW!