Colder Temps Are On The Way 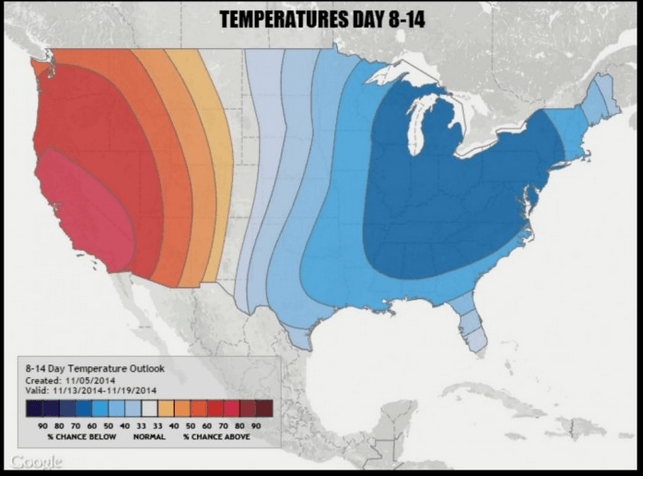 I feel like I was being a huge bummer yesterday, so I’m going to be way more positive today as some snowmaking temps could return tonight and tomorrow night, and maybe even a tad bit of natural snow.  Also, we have some great news in terms of the weather beginning the middle of next week.

First off though, I have some corrections to do.  I stated yesterday that Cataloochee and Sugar were two of the only three open resorts in the country.  WRONG.  In addition to A-Basin, Colorado has Loveland open.  How did I miss that?  I guess since A-Basin won the battle this year the fanfare and media coverage of Loveland opening was much smaller than normal.  Up north, Killington is also open in Vermont (opened Monday) and Sunday River in Maine is open on a limited basis.  That’s some sloppy reporting by me and I apologize.  Thanks to Andrew McElroy for calling me out on Facebook.

Regardless of the rest, Cat and Sugar are still in an elite group in terms of currently open ski areas.  Mother Nature has been a little unkind over the past few days, it’s starting to show on the webcams, but it looks like tonight should see a brief reprieve from the warmer temps.  It’s not a ton, but of a bit of snow is in the forecast and temps should drop below freezing at both locations and enable snowmaking to resume.  It also looks like Friday night will allow for snowmaking as well.  The weekend looks a little iffy for manmade snow as temps will be borderline, but I think both Cat and Sugar will at least try. The daytime weather should be fantastic.   Spring skiing conditions.  If Cat has some park features out, I’m really considering driving to Maggie Valley on Saturday.  Below is the current forecast for Cataloochee from Local Yokel Weather.  You can see what Im talking about in terms of temps.

Next week is when it gets really fun.  I was hesitant to mention this yesterday since it’s so far in advance, but Brad Panovich talked about it on TV last night, Weatherbell is talking about it, and so is Ray’s Weather.  It’s looking more and more like things are about to turn FRIGID next week…for an extended period of time. Check out the outlook from the CPC.

On one hand, brrrrr. On another, THAT IS AWESOME. All signs, right now, are pointing to our first extended period of cold that would allow some really good and efficient snowmaking to take place. I’m really interested to see who would start making snow and who won’t. Thanksgiving is still several weeks away and I know some resorts aren’t interested in opening until then, or December for that matter, but the usual suspects are probably pretty excited right now looking at the forecast. I know I am.

We’ve still got 5 or 6 days to go until all of this happens though so I guess we’ll just have to make do with only a half inch or inch of snow tonight. Ha. I’ll take it.

That’s it for today peeps. Until next time.