Colder Temps and Even Some Snow Arrives Tonight!

Yesterday was another extremely warm day.  I mean really warm.  Some of the temperatures I’m seeing are what you’d normally see in March and April, not early February!  I’d imagine the snow was super soft and slushy.  Luckily, we only have one more day today of milder weather before cold and snow returns tonight.  Phew.

I was looking around at the weather forecasts yesterday afternoon and I came upon the page for Canaan/Timberline as I am contemplating an excursion up there.  I couldn’t believe what I saw.  The temperature yesterday afternoon up there was in the 60’s!  All the way up in northern West Virginia!  I was a little shocked as the forecast was only for the 50’s.  That and I don’t ever know if I have seen temperatures that warm for that part of the region during the middle of winter.  Sheesh.

It’s been so warm the past two days that David Lesher is reporting this morning that there is hardly any snow on the ground up there (Canaan) anymore.  Two days ago there was 10 inches on the ground.  Three days ago it was a foot.  Today, “only a few patches of snow remain”.  No bueno.

Let’s take a look at some of the highs yesterday, as they were once again impressive.

Yeah, it was warm.  As I said, yesterday was more reminiscent of March or April.  Brad Panovich was on the news yesterday and he was talking about pollen levels.  Pollen levels!  In early February!  What in the world.

Today is going to be much cooler thankfully, albeit still mild.  Even better news is the fact that there is some snow in the forecast for tonight and tomorrow.  The bad news is that we have to contend with some rain between now and then before a changeover to snow.  For the most part, the morning and afternoon hours should be fine.  There are already a lot of grey skies visible on the webcams but in general things should stay dry until the evening. 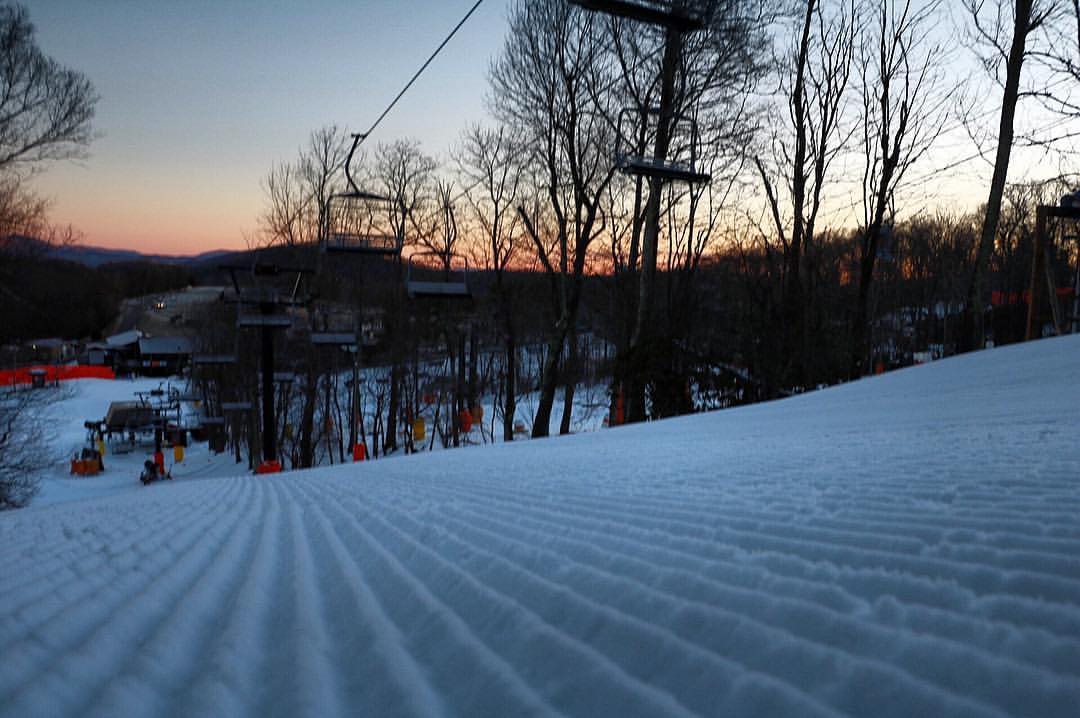 A sweet shot from App Ski Mtn this morning.

I’ll let Brad Panovich do the talking as he sent in his latest video forecast.  He also looks ahead to next week in the build up to President’s Day Weekend.

You could see in Brad’s video how it looks like the majority of the snow with this upcoming storm will stay up in northern West Virginia and Maryland.  Mike sent me a text message this morning commenting on how it seems like that’s how it’s been all season.  Yup.  While West Virginia is definitely behind on snow totals, there’s been a sharp dividing line somewhere in the central part of the state.  Anywhere east and south and the natural snow has been MIA.

Here are some of the current snow forecasts for WV and Wisp in Maryland.  The NWS in Charleston is thinking 2″ for Winterplace and 6″ for Snowshoe between now and Friday. 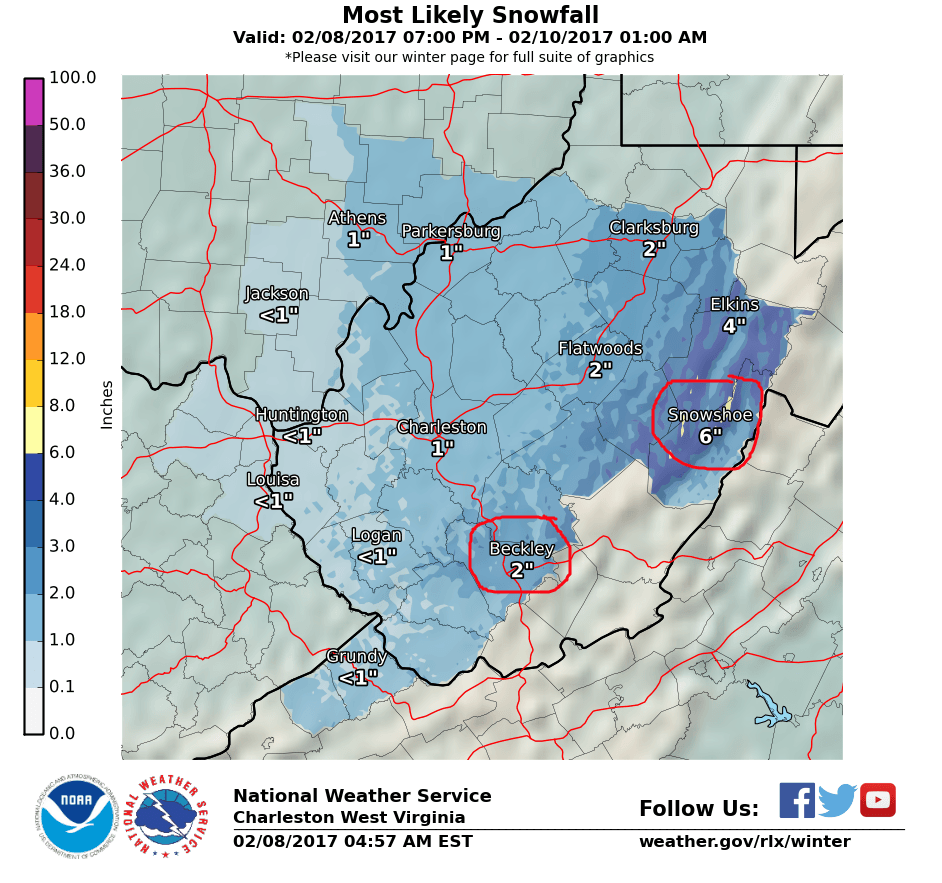 The NWS out of Pittsburgh does the forecast for Canaan, Timberline, and Wisp.  They’re thinking maybe just a little bit more for Canaan and Timberline (7″) with 6″ for Wisp. 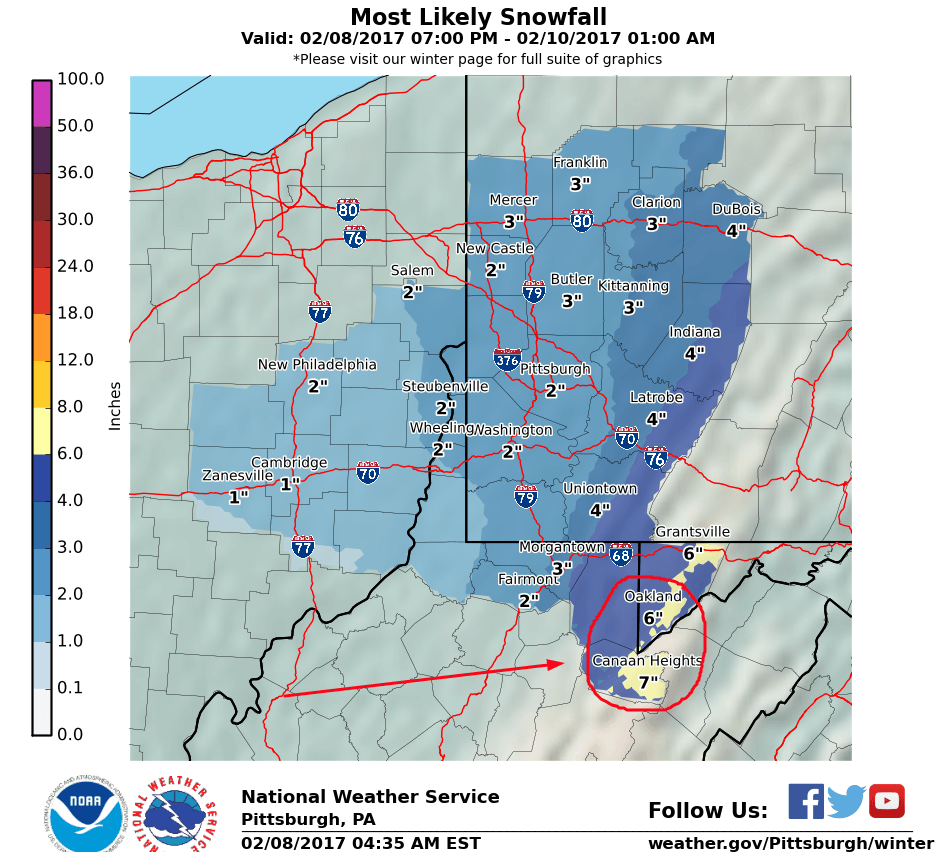 The snowfall numbers for the ski areas in Virginia and North Carolina aren’t nearly as good but snow is snow.  The Virginia resorts look like they could see a dusting or so.  Maybe an inch at best.  As for North Carolina, it looks like the snow will be confined to the northwestern portions of the mountains.  That means Wolf Ridge, Beech, Sugar, and App Ski Mountain.  It looks like an inch or so is possible for them with maybe some more for Beech and Sugar.  Those two could benefit from Northwest Flow on the backside.

So tomorrow and Friday could be a mini powder day for some ski areas.  Whatever happens with the natural snow, snowmaking will fire up once again tonight and continue for a few nights.  The weekend looks very mild so the manmade snow that gets laid down between now and Saturday will be needed in order to refresh the slopes.  A few brown spots were visible on the webcams this morning but those should be quickly covered up after a night of snowmaking.

As Brad mentioned, another warmup is in store but let’s not worry about that for now.  I will say that some of the longer range models show a better looking second half of February and early March.  Let’s hope that pans out.  I am in desperate need of a powder day. 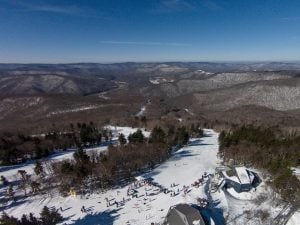 Snowshoe held their annual Cupp Run Challenge yesterday and it looks like the people who competed were treated to some nice conditions.  Snowshoe posted a photo gallery filled with tons of great pictures on their site.  Check it out at the link below.

You’ll see a little paragraph at the bottom of this post that reminds you about the 2017 Ski Southeast Summit at Snowshoe Mountain, but I figured I would also drop a little line in here to remind you all.  For those that don’t know, Snowshoe is offering 20% off lodging, free Sunday lift tickets, and we’re also giving away a couple season passes!  While the event itself is 3 and a half weeks away, we’re doing the season pass giveaway 2 weeks from Friday, so make sure to sign up today!

Previous Post
Well Timed Snow and Cold Air for the Weekend
Next Post
Cold, Snow, and Snowmaking Has Returned to the Southeast!