Colder Temps Are Back After A Brief Hiatus 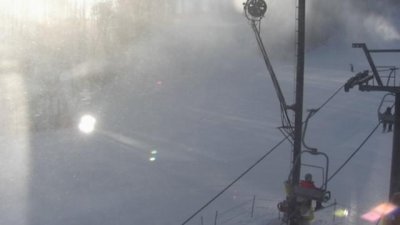 Yesterday saw a line of underdeveloped snow showers move through the region. I was kind of worried at one point yesterday as the radar was showing some fairly heavy stuff headed this way. I’m definitely glad I didn’t ride last night as that stuff arrived right around 6pm, which is exactly when the night session starts. Looking at stations across the region this morning, it looks like precip totals are in the quarter to three quarters of an inch range. That’s not terribly bad, and it’s way less than some of the downpours we’ve seen so far this year.

As I already mentioned though, as soon as that underdeveloped snow moved out, colder air moved in right afterwards. Only Winterplace and Snowshoe are reporting any natural snow this morning and they are only saying a trace at that. However, just about everyone is making snow this morning as those colder temps have allowed snowmaking operations to resume. 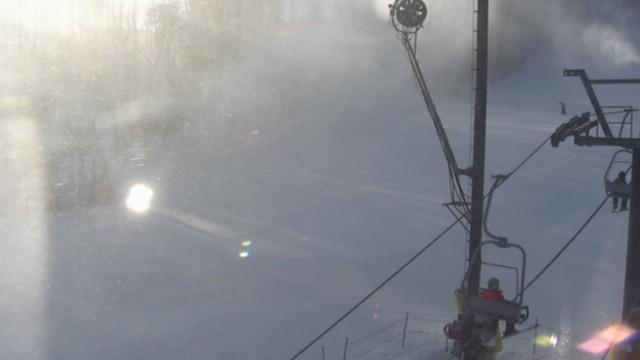 <<< With temperatures in the 20’s, Appalachian Ski Mountain has been able to blast the slopes this morning! 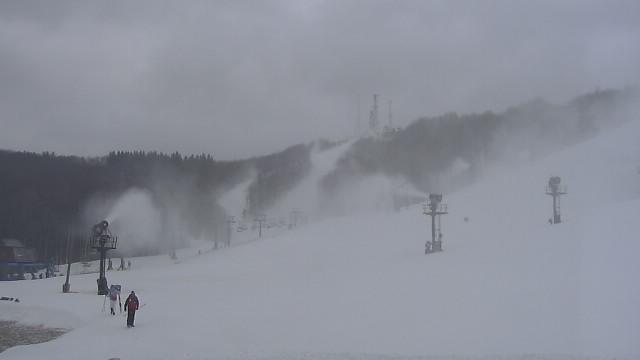 Winterplace is also making snow as of this morning.  They have also seen a trace of snow overnight and scattered snow showers are expected today!

The wind this morning is another big deal. I was driving up Highway 421 this morning and my car was getting blown around pretty significantly. Therefore, I wasn’t surprised to come into the office this morning and see some fairly impressive wind readings. Our Sugar Mountain station is showing a wind gust of 27 mph right after midnight. The Hawksnest station is reporting a 42 mph wind gust at 5:43am. Those are some pretty high numbers. It’s windy up into West Virginia as well as wind speeds this morning at Snowshoe reached 30 mph. Combine those winds with the chilly temperatures and it’s pretty blustery out there today, so bundle up!

The majority of ski areas in the region should be able to make snow around the clock today as temps won’t warm that much. The North Carolina, Virginia, and Tennessee ski areas should see a decent amount of sunshine by the afternoon as well. The West Virginia and Maryland resorts will luck out and are expecting scattered snow showers today and tomorrow.

Wherever you ski or ride today, you will get some really good conditions. Base depths and coverage on open trails continues to look pretty good across the board. The next couple of days are also a good time to get out on the slopes because the weather doesn’t look as promising for the weekend. I’ll hold off on that for another day and talk about it tomorrow…

Well, we held off on doing giveaways so far this year because quite frankly, the weather was pretty bad so far. However, with things turning around like they have been, I’m stoked to be able to tell you that the first contest begins today! We’re giving away 2 nights lodging (February 3rd and 4th) at one of the 3 properties owned by The Village Inns of Blowing Rock. In addition, you will receive 4 free lift passes to Appalachian Ski Mountain, which is only a 5-10 minute drive from either of those properties. This is a pretty cool deal because the giveaway weekend coincides with our SkiNC summit at Beech Mountain. You can use the passes to App on either Friday or Sunday, and then make the short drive to Beech to meet up with all of us on Saturday. It’s just a suggestion!

The only rules to this contest are that you have to be at least 25 years of age, and you must be a fan of Ski Southeast on Facebook. Whenever we randomly choose a winner, I’ll cross check the name to see if they are a fan of us on our Facebook page. So make sure to like us or you won’t be eligible! Head on over to the CONTEST PAGE to submit an entry and get more info. The deadline to submit is one week from today, January 25th. This will give the winner over a week to prepare and make plans for the trip.

That’s all today.  Talk to you guys tomorrow!

Previous Post
Beech Mountain Resort Offers Some Great Incentives to Learn to Ski! Click to Enlarge!
Next Post
Win a Free Weekend of Lodging and Skiing!