COLDER AND A LITTLE MORE SNOW THAN NORMAL!!!

Each year we consult with the Farmer’s Almanac, AccuWeather and Brad Panovich. Each year we monitor the fogs in August, the acorn crop, the activity of the chipmunks and we patiently await the woolly worm crawl to get ANY glimpse at what the subsequent winter will be like. 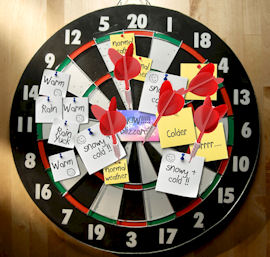 Over the last few years we get the input that Joe Stevens provides us with his network of weather gurus. Each year we use all the science that we can gain to try and get some glimmer or suggestion of what the wind currents say will happen. It’s kind of like that old indian in the movie Outlaw Josey Wales – when he puts his ear down on the ground and claims he hears horses coming. You can tell by the look on his face that he’s jerking Clint Eastwood’s chain.

Over the last couple of seasons – every weather guru on Planet Earth has simply got it wrong – the long range forecast that is. Okay, okay – Meteorologist Brad Panovich did a very respectable job but even he hedged his bets – not just because long range forecasts are hard – but because all of the forecasting ingredients were simply making for a "tough to call" forecast.

Last season most every forecaster was saying "less than normal snow" and some periods of mild and dry weeks that would make it tough for ski areas to remain open. We all know what happened was that by the end of January every ski area in North Carolina, Tennessee, West Virginia and Maryland had already surpassed their seasonal average. Sometime in early January all of the forecasters were talking about how this had occurred (after the fact) and then all talked about last season perhaps becoming the colder winter on record.

WHAT A REVERSE JINX THAT WAS!!! Seemingly the very same day that the Groundhog did his shadow forecasting thing on February 2nd – the switch flipped and the snow basically ceased for the most part other than some ambience snow that fell from time to time.

Howver, all in all it WAS a snowy season. Each of the important holiday weeks and weekends were good. It didn’t end up being a record setting skier visit season – but it was still one of the best five attendance seasons ever – at most of the ski areas of our region.

Things just played out last season that the Virginia ski areas kept getting missed and Massanutten led the way in the lovers state with 16" of snow for the season.

KENNY GRIFFIN – Meteorologist brings his knowledge to the team

TheKenDog, as messageboard members know him, is a vital member of our staff and in addition to providing the morning snow reports, he is doing the weather forecasting. He’s been a little hesitant to stick his neck out just yet and provide us with HIS Long Range Winter forecast. We hope to get that soon and we’ll provide it along with fellow snow loving weatherman Brad Panovich’s.

It’s been a while, but we pulled out our handy, dandy, rusty-but-trusty weather dart board and cleaned it up and mounted it on the wall. I fairly and equitably posted sticky notes on the board reflecting warm weather, rain, cold and snow (as fairly and equitably as CNN reports politics anyway) and I ALMOST closed my eyes and threw five darts. Why five? Heck I don’t know…work with me here.

I’m a right-leaning kind of guy. You can ask Kenny Griffin. When he and I play tennis once a week, I almost always hit to the right – right into his all-too-good two-handed backhand. So it was not surprising to see the results placed three of the five darts over on the right side of the dartboard…which coincidently is where most of the good weather stickies were placed. GO FIGURE!

As you can tell by the photo of the day – and the one on this page – we pretty much landed on "colder", "snowy", "snowy and cold" notes. Man we just MISSED a blizzard!!!

So after some nervous throws (I P-R-O-M-I-S-E I didn’t just hand place them on the board. You guys weren’t looking were you?) I came out of this ordeal with the forecast that we’ll see slightly MORE snow than usual and a little colder temperatures than normal.

I think Virginia will see more snow than they have the last couple of seasons and it has NOTHING to do with the fact that we now have a HUGE increase in marketing synergies with all of the ski areas in Virginia – for the first time ever!

From what we’re seeing – uhmmm I mean from the darts landed – I think we’ll see some volatile weather across the region with some chances of some deep snows. Along with that volatility I think we’ll also experience some ice on occasion. You didn’t know that all of that kind of data can come from a dart? Well now you do.

Several of our readers have been writing about how the fogs, acorns, worms and chipmunks are all joining together for a kind of less-than-pristine winter forecast. I can verify that I have VERY FEW acorns in my yard this season. Last year at this time I couldn’t walk out my back door without shoes on because there were tens of thousands of them all over the ground. So I don’t really know what to make of that…so I’ll just dodge the issue.

HERE’S SOME MORE TALENTED DART-READING FOR YOU!

December 2010 was the coldest December ever recorded in several of the ski area communities that we cover. Boone, NC recorded an average of 24.9°. The previous coldest December in Watauga County was back in 1963. Cold continued through the end of January and that combined with lots of snow pretty much destroyed any of the regional weather guru’s long range forecasts.

Seems like all the talk for the last several years is La Niña, El Niña and the Pinta and Santa Maria. Those "Niñas" – strong or weak – along with the currents and jet streams have been the strong dictator of what kind of weather we receive.

Another noteworthy tidbit of news is that TRENDS show that from the 90s until 2008 or so we saw less snow than normal or average. Since 2008 we’ve seen more than normal. From all indicators (accuweather, NOA, and the Farmer’s Almanac) they feel that December and January is setting up similar to what we saw last winter.

Each of these forecasters (ummm I mean the darts) indicate that we should see a colder November-December-January than average. These same peeps/darts are also saying we could (AGAIN) see a milder February and March.

I don’t know about you guys but I’m kind of just hoping from something a bit more consistent throughout the season – but I guess we’ll see. So if you’re wanting to know HOW MUCH snow to expect – simply go to each of the ski area pages on SkiNC / SkiSoutheast and down on the third column you can see the AVERAGE SNOWFALL EACH SEASON for each resort, along with the snowfall that they’ve each received in the last several years. By the way we are THE ONLY resource providing that content. Anyway take those averages and multiply by 1.28% and you’ll get our prediction for the natural snowfall for the winter.

Weather forecasting isn’t an EXACT science so may we better use a multiplier of 1.11% for the WV ski areas. 200" of snow – yea that sounds about right!

1.11 to 1.28% more snow than average AND 1° colder than normal. Look for those snowguns to do a GREAT job of keeping us with great conditions and with some natural snow added to the mix we should have a stellar season!

We’re seeing very strong indicators (nothing to do with the darts here) that people are getting sick and tired of waiting on the economy to get better. If anything, the economy looks to be potentially getting worse before we see real improvement. However pre-season festivals and early bookings seem to indicate that perhaps the "sick and tired" crowd are saying that "FUN" will trump the economy this season. We have long known that SNOW trumps the economy so with a little good fortune (good timing of the natural snows and cold) we should be a fabulous 2011-2012 ski and snowboarding season.