A stark theme came to the top very quickly this morning as I was updating the ski reports – it is cold out there.  I was at Beech yesterday (more on that in a minute) where it was definitely cold yesterday but nowhere near the -13 degrees they are reporting this morning.  It has been as low at -40+ this morning with the wind chill. 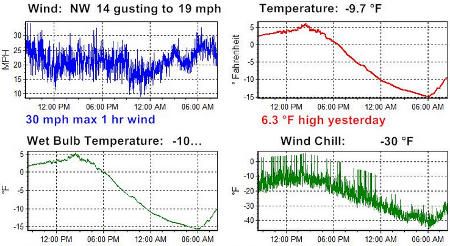 As I said, cold is the theme across the entire region.  Appalachian was at -7 at the time of updating, Sugar -10.6, -2 down at Wolf, and up North it was -6.9 at Wintergreen, VA and -8 at Snowshoe, WV.  Keep in mind that these are ambient temps.  The real feel at Snowshoe is more like -27 degrees when you account for the wind.  In fact, the whole of the Southern Appalachian Mountains are under a Wind Chill Warning or Advisory this morning.  Bundle up – it’s going to be a cold day.

But, there is always good with the bad – right?  The good is that Snowshoe received ANOTHER 2” OF NATURAL SNOW in the last 24 hours.  That brings them up to 24” in the past week!  Both Canaan and Timberline got just over 3” of the natural stuff (Canaan was -5 degrees at the time of updating and -24 with wind).  Staying in WV, Wintergreen received an additional inch of natural snow while Wisp in Maryland was the proud recipient of an inch as well.

Cold, snowmaking temps, along with the natural stuff Mother Nature has been providing (and continues as I type) has enabled the mountains to open up the trails.  Wintergreen has 24 of their 25 open today and will open the straggler, Outer limits, this weekend bringing them to 100%.  Winterplace is also at 100% as is Ober for the weekend.  And let us not forget, that Appalachian, Beech, Cataloochee, Sapphire Valley, Sugar, Bryce, Massanutten, & The Homestead are all operating at 100% as they have been.

On to my day at Beech yesterday.  The bottom of the hill looked very promising as I made my way up the quad for the first time. 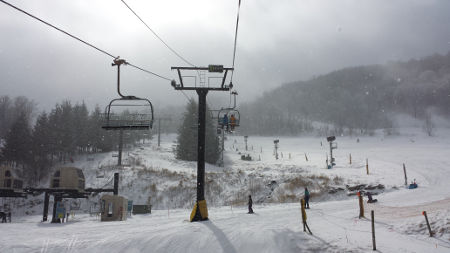 The top was a slightly different story 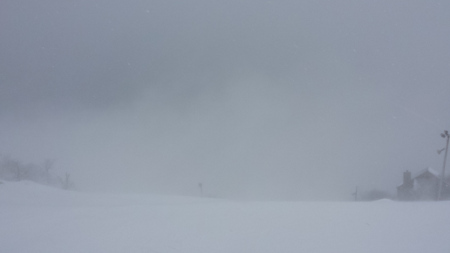 Shawneehaw is down there – somewhere

My first run down Shawneehaw was rather lovely, if not limited in visibility at the top.  I have some video that I’ll load up as soon as I figure this thing (GoPro editing) out.  My next run was down White Lightning, and this might have been my biggest mistake of the day.  The run was very nice at the bottom… 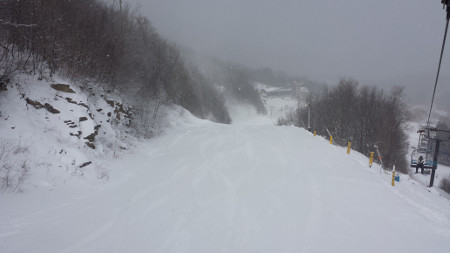 but completly whiteout from midway on up. 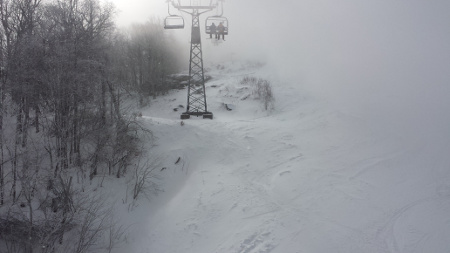 They were making snow as if they were never going to get the chance again.  I ended up side slipping down to about half way because I could see only a few inches in front of my face – after I removed my goggles which all but crusted over.  There were times when I could barely make out my skis – and I’m not a tall man.

So, after a couple more trips up and down (anything other than White Lightning) it was time for a break.  And where do you go at Beech when you need a pick-me-up? 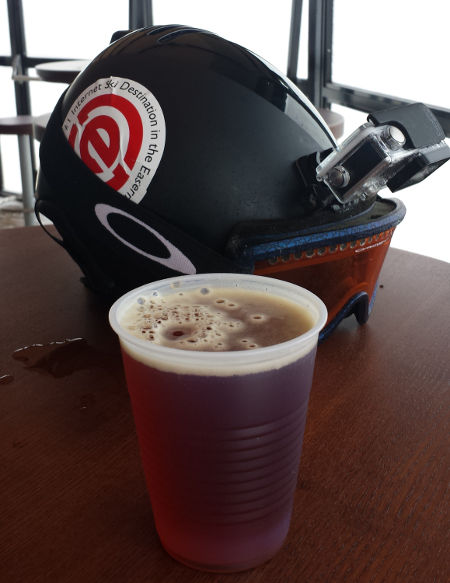 The last time I was at Beech was supposed to be the opening day for the 5,506 but they needed an extra day for last minute preparations, so I missed it.  This is my first beer at the top, and I think it’s become quite the tradition to take a pic of the first one.

Now a strange thing happened while I was taking in the 5,506.  There’s a saying (I heard it from Homer Simpsons) that beer is the cause of and solution to all of our problems.  Well in this case my friends, I am happy to say it worked out decidedly in my favor.  While we couldn’t really see out of the windows of the bar, I was welcomed with a most enjoyable sight upon exiting. 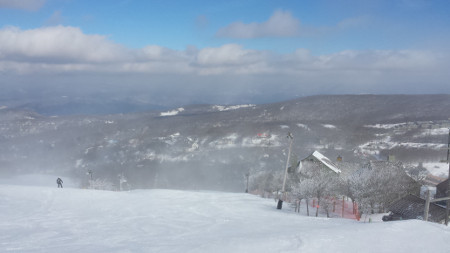 It cleared up nicely around 1:30 or so and it was smooth sailing from then on.  The snow was really good on Shawneehaw and that is where I spent my last few runs.

As I was leaving, I dropped in at the office and we laid the groundwork for a Beech Summit.  More on that very soon…

Before I let you go –  as I’m sure you noticed above, I highlighted the resorts when mentioning.  Now, I know you all read every word I put down here with bated breath, but I thought this might make it easier for you to scan to pick out your favorite.  What do you think – is it more annoying than useful?