A Cold and Snowy Weekend! Great Conditions at the Ski Resorts! What lies ahead? 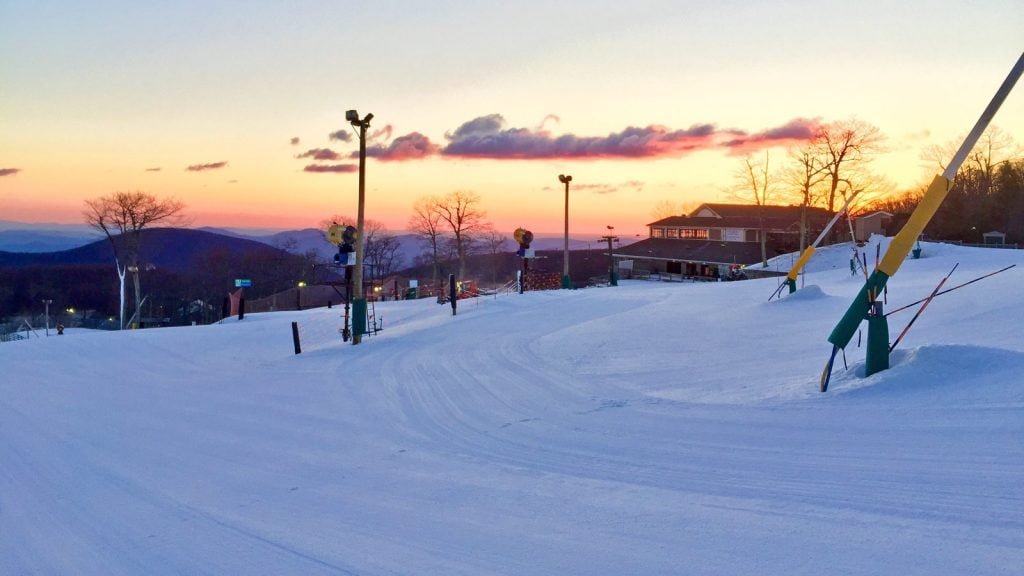 As of this morning over 42% of the United States is covered in ‘White Gold’…and probably more importantly our southeast and mid-Atlantic ski mountains have been blanketed by the coldest air and longest stretch of cold air in years…and maybe ever. A lot of the locals who I have spoken with lately tell stories of much colder air, but not for an extended period of nearly two weeks like we’ve seen lately.

One old timer joked yesterday, “Ya know President Trump’s only been in office for one year and he’s already solved the global warming problem.” I laughed even though I had already seen that on some social media websites. Everyone’s been talking about the weather and that is a good thing for the skiers and snowboarders of the region, as long as that talk is about ‘cold and snow’.

That weather trend looks to be providing yet another super weekend of conditions as another arctic push drives cold air into the region. Check out Brad’s Skier’s Forecast!

Our meteorologist Brad Panovich has provided his latest Skier’s Forecast and he’s advising ski areas to make all the snow they can to prepare for a short period of “January thaw” that lies ahead of us on the calendar. That’s nothing new for the south as it seems to happen every season at some point.

So this weekend looks awesome and then as we head into Monday and Tuesday it looks like the West Virginia ski areas should see another batch of snow (maybe even 4-6″ of it), but most of us in Virginia, Tennessee and North Carolina are looking at some wintry mix of ice, snow and some rain. Let’s hope for all snow, right?

Whatever happens in terms of snowfall Monday, Brad’s saying the temperatures will moderate a bit for much of the week ahead. A lot of you weather watchers out there have been emailing me asking about the upcoming MLK weekend. Some have even shared concern over this week’s forecast hinting that it could cause conditions to go downhill as we head towards that popular three-day holiday weekend. Okay people, it’s time to take another chill pill. We’re going to be just fine. In fact, we’re going to be MUCH BETTER than just fine.

The forecast for Tuesday through Friday (Jan 12th) does show for some milder weather and a shower or two, but there is so much snow built up on our resorts that conditions will be awesome for the MLK weekend. That is a guarantee from yours truly that you can count on.

Additionally, cold air and even some snow is in the forecast for next week as temperatures are predicted to drop back into the teens, 20s and low 30s for highs. So conditions will be great as we look into our ‘SkiSoutheast crystal ball’ for the next 7-10 days. After that is anyone’s guess but the long range forecast (as it looks now) is showing for temperatures to be about normal as we head into January 20th or so.

So Great Condition Are Ahead for MLK, How About Now!

Okay, I know. I know. Everyone is talking about the cold and snowy stretch we’ve been in so you already know that our ski areas have some of the best ski conditions in years for this weekend. In fact, one ski area is 100% open today for the first time in five seasons! (Read on to find out which one.)

Temperatures got even colder last night than they were forecasting them to dip down to.

We saw these as we looked around:

Check the SNOW REPORT for all the details, but here are some worthy notes to share.

Wisp Resort – rockets up from 18 slopes open on Friday to 32 of 34 trails. That’s got a lot of social media fans happy up that way!

Ober Gatlinburg – Today the slopes are 100% open at Ober Gatlinburg!! Alpine Way is open for the first time in 5 seasons! Alpine Way, Grizzly, Ober Chute, Yeti’s Run, Mogul Ridge are all open. Today they have their King of the Mountain event on Mogul Ridge– go and try to claim the title!

Canaan Valley’s David Lesher is reporting another 1.3″ of new snow; 5.9″ since January 1st and 52.5″ on the season…which leads the region in natural snowfall this season.

Winterplace – Groomed & Packed Powder – No daytime snowmaking today. Wood’s Run will have a pm opening and Hickory will open in the pm as a trail. The grooming and snowmaking team are working on Turkey Chute and Almost Heaven for opening soon.

Beech Mountain had White Lightning open on Friday but not today. Not sure what that’s about. They are running 100% open minus Upper and Lower White Lightning and the Oz Run which has not been open yet this season.

Massanutten – Diamond Jim closed for a SARA snowboard event until 2PM. The Mega Zip and Kid’s Adventure Course will be closed today as well. Lester Rockwell shared this capture from flying a drone up at Beech.

Learning to Ski with powder and Snowshoe.

If YOU have anything to share (photos, videos, comments, questions), the best way is to email me at [email protected]

Previous Post
Ski Southeast Forecast for 1/5/2018: One more really cold weekend then a bit of a January thaw.
Next Post
GRAYSON WHO? by Joe Stevens