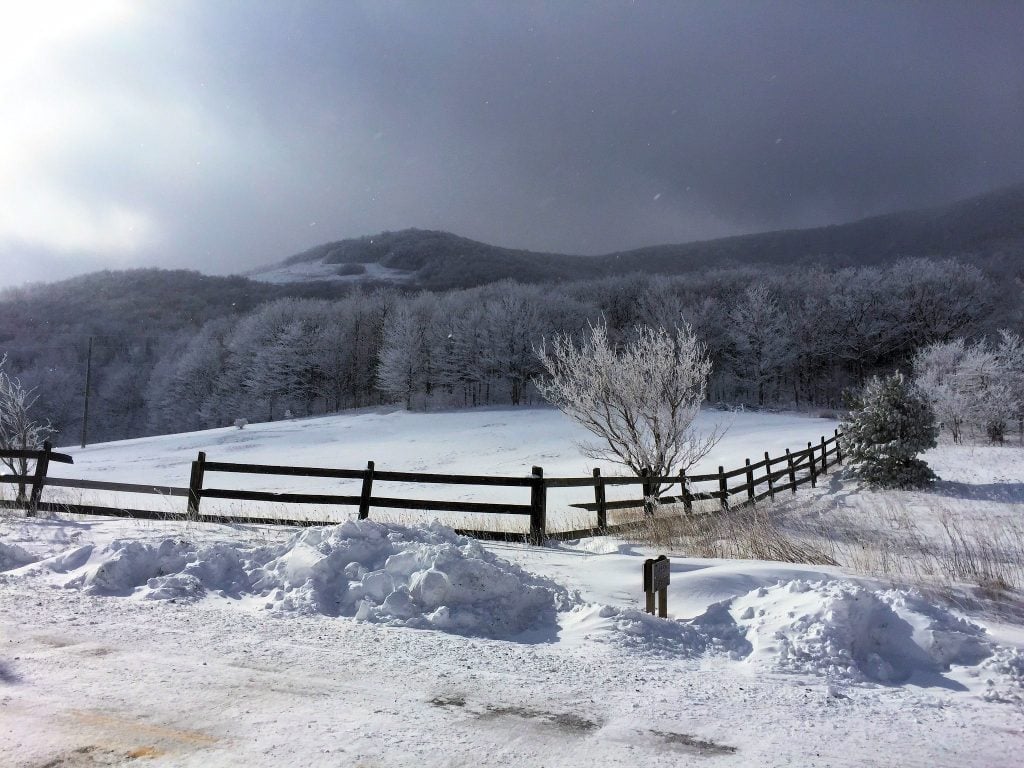 (The photo above can be ENLARGED and it was taken and submitted by Hope Caroselli at Elk Knob on Saturday as they played on snowmobiles.) 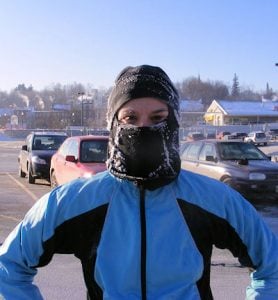 First things first – if you’re going to be skiing or riding one of the ski areas today – bundle up. Make sure that you dress in layers and cover all skin. We are seeing wind chills reports of MINUS 20° this morning across numerous mountain tops. The high today MIGHT reach 5-6° at some ski areas. Wearing proper clothing will make today the best day of the ski season to date.

Not only have we seen 5-11″ of snowfall over the last 48 hours, we’ve also seen the most consistent and prolonged snowmaking ops as mountain ops at every ski area have been able to run their systems non-stop and that has resulted in a ton of new snow.

One of our long-time readers, Austin Beeghly emailed last night that he had been touring the LIVE WEBCAMS and noticed that Cataloochee was not making snow. He wrote to inquire what was “going on”. Anytime it snows we get a ton of emails – so I decided to answer Austin here…

Actually several ski areas were not making snow during open sessions on Saturday. We were still experiencing natural snowfall as well, and that prompted a few ski areas to shut down snowmaking ops during open sessions – much to the enjoyment and appreciation of skiers and snowboarders. We witnessed this at Appalachian and Cataloochee, but I’m certain others were doing the same.

Also bear in mind that we don’t have LIVE CAMS showing every slope, so sometimes snowmaking may be going on with unopened slopes.

On that note, several ski resorts are opening more terrain today. We updated the full Snow Report early this morning and it is reflecting more open slopes that we’ve had at any point thus far this season.

Another reader, Jon Smelling, wrote, “Guys, can you tell me why it is that none of the ski resorts are fully open at this late point in the season? Usually by now I know that XXXXX is usually open with every slope. What gives?”

Jon is correct in noticing that ski areas in our region are not operating at full capacity and here we are at January 8th on the calendar. We are fast-approaching the traditional halfway point in the season (the end of January marks the half-way point for most ski resorts) and the usually busy MLK weekend and really only Snowshoe Mountain, Winterplace Resort and Bryce Resort are operating at close to fully open. Snowshoe’s 50 of 57 open trails leads the region and most other ski areas are from one-third to one-half open.

The answer is really simple logic. So far this season, we simply have not had long-term, consistently cold temperatures to make snow. The WV resorts have had it better in terms of low temps, but even they have not seen the normal string of week-long cold snaps. We’ve seen 2-3 days of cold temps followed by 3-4 days of mild temps and even some rain so far this season.

So resorts have been forced to concentrate on making and keeping enough base snow on their core trails to insure that they could be open.

Another reader asked why resorts weren’t NOW focusing on opening ALL of their trails. That answer is also simple – LOOK AT THE FORECAST. Right NOW we are seeing brutally cold temps and there is no question that our talented snowmaking crews could bomb unopened terrain with snow and open those within a day or so. However, one look at the extended forecast shows that after TUESDAY of this week…it looks like we’re in for another mild stretch of temps.

You can be certain that every ski resort mountain op crew WANTS their entire mountain open for skiing and riding. However, you can also be certain that those same crews keep their focus on the weather forecast and they are seeing the same thing that we are – after Tuesday of this week it looks like we’re in for perhaps the LONGEST stretch of NON-SNOWMAKING DAYS so far this season.

Every season we see that dreaded “thaw” and we can hope that we only get one, but right now the long-term forecast is showing NO snowmaking temperatures from January 10th-January 22nd (we used the forecast for Beech Mountain for this look ahead but we’re seeing the same forecast for Snowshoe and the usually colder West Virginia resort mountains).

It isn’t going to be WARM, but we’re also not seeing opportunities for making snow during that 12 days stretch. Armed with this information, ski resort mountain ops are doing their best with what they have to work with. They’ve all focused on making HUGE whales of snow on currently open terrain (their core trails) and that way they can guarantee good-to-great conditions for their visitors even if things mild up over the next two weeks.

Kenny was sharing that yesterday might have been a record viewer day for ResortCams and our SkiSoutheast.com network. Actually I think we might have fallen a bit short of a record, but we HAVE seen 486,044 cam views during the storm and we heard from or witnessed dozens of television stations that used our LIVE STREAMS to show the snow to the rest of the world.

As I was typing up this report I have been watching WCNC News for the last hour and they showed SIX different ResortCams views including App, Beech and Lake Norman, King Street, Banner Elk 184 cam and Blowing Rock.

Snow is the driving force for everything that we promote. Speaking of snow, it’s crazy when you look at the hundreds of CoCoRaHs reporters from several states and see Hickory, North Carolina as one of the top spots in the state for snowfall in the last 24 hours. However that is the case. Hickory is reporting 7.5″ of new snow in the last 24 hours.

Beech Mountain is second on that list with 4.3″ in the last 24 hours and 5.6 the day before for a snow storm total of 9.9″ and that reporter is Gil Adams of Beech Mountain Resort.

On Saturday morning I reported that Norlina, NC had received the most snow from the storm and they saw 12″. That number would still lead the state. We saw perhaps another 1″ of snow yesterday and of course the entire area is a winter-wonderland today with deep snow everywhere.

One of the coolest CAM VIEWS this morning is actually not from a ski resort but from Hibriten Mountain in Lenoir, south of Blowing Rock. If you want to see some gorgeous snow shots this morning – visit: http://www.resortcams.com/mountain-cams/

Check the SNOW REPORT PAGE for slopes open as several resorts have opened additional terrain for today after the snow storm and lots of optimal snowmaking. The temperatures barely rose to 10° at many of the ski areas yesterday and snowguns were on full bore everywhere. Note the some ski areas are only open for Day Sessions on Sunday – so again – Check the Snow Report.

For today – we thought we’d share storm totals reported at each of the ski areas over the last 48 hours or so.

We are always getting some great videos to share. We’d love to see more from ALL of the resorts. However, here are the best of the best for today.

Unless you’ve been hiding under a rock, here’s the video that everyone is talking about where an amazing chairlift rescue took place. If you’re going to get trapped on a chairlift it pays to have a PROFESSIONAL SLACK LINE WALKER behind you. Check out both videos.

That’s it for me today. Enjoy your day.

Previous Post
FIRST TURNS OF THE SEASON, ALWAYS MEMORABLE
Next Post
Check Out this Amazing Chairlift Rescue at Ski Resort