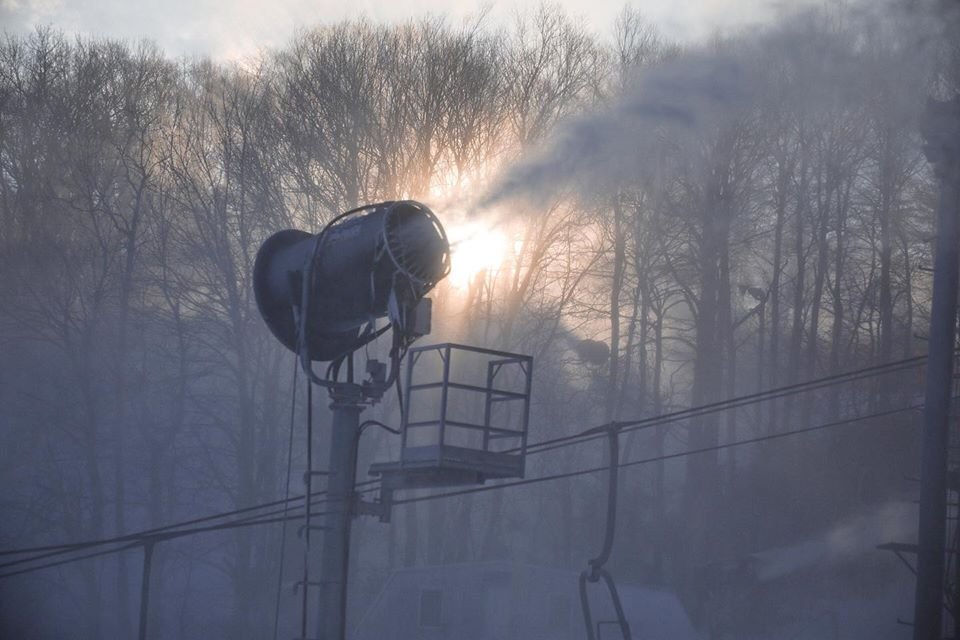 Today’s featured photo is from App Ski Mountain as snowmaking has returned to area.

Winter has returned (once again).

The roller coaster winter continued as expected yesterday as temperatures plummeted later yesterday. Wind and a little bit of natural snow came along with the cold to help build the holiday spirits.

Brad Panovich shared this video last night from the summit of Beech Mountain as the snow began.

The big story, however, is the return of the winter temperatures.

Snowmaking is going full blast at every resort this morning and the impact is already being seen on those base numbers – most resorts have been able to add six inches or so in a 12-hour period. With a large snowmaking window today and tomorrow, it is going to be fascinating watching the snow pile up as the slopes get refreshed for the holiday weekend. (#ThankASnowmaker)

Not to mention, conditions are looking pretty sweet for the next 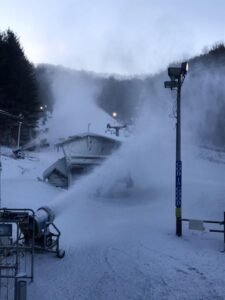 There are 12 resorts open for play today. All will be making snow today as long as conditions allow, and will also be cranking the guns back up as soon as possible.

North Carolina
App Ski Mountain (18°) – Open with eight slopes and four lifts operating. They have a 34-42” base with a packed powder surface.

Cataloochee (17°) – They are playing on a groomed surface with a 26-46” base. They have six slopes and three lifts operating.

Sugar Mountain (12°) – They have nine slopes and four lifts open with a 20-40” base. They are playing on powder and some frozen granular.

Wolf Ridge (19°) – Riding and skiing on a 12-24” base with a groomed surface. They have three slopes and two lifts open.

West Virginia
Canaan Valley (18°) – After receiving almost an inch of natural snow last night, they are playing on 12 slopes with four lifts operating. They have a 20-30” base and was reporting a frozen granular surface. However, they are putting down the snow this morning so there is some manmade powder out there as well.

Snowshoe Mountain (12°) – Snowshoe continues to expand their terrain offerings as they are now up to 30 open trails with 11 lifts open with a groomed surface with a 40” base this morning.

Winterplace (19°) – With a 20-40” base, they are playing on eight slopes with four lifts operating with a groomed and packed powder surface.

Virginia
Bryce Resort (28°) – Open for day sessions with four slopes and one lift operating. They have a 24” base with a loose granular surface.

Massanutten (25°) – A groomed surface on 24” base with four slopes and four lifts operating.

Wintergreen (21°) – Playing on five slopes with two lifts operating. They have a variable surface on a 12” base.

Maryland
Wisp (19°) – Last but not least, Wisp is looking fantastic as they are playing on five slopes with four lifts operating. They have a 21” base with a groomed surface.

For full details, be sure to visit the Snow Report – which is updated daily.

The three other resorts in our coverage area – Ober Gatlinburg, Sapphire Valley and Omni Homestead are also making snow this morning. Ober and Sapphire will open as soon as possible while Homestead is targeting a Saturday opening.

It is going to be a fantastic day on the slopes. If you find your way to your local mountain, be sure to send us your photos, videos and trip reports – we would love to feature you.