Cold and Snow Returns! We’re Planning A PARTY at Snowshoe! Come Join Us!

Kenny’s headed to Lake Tillery in Stanly County this morning to help install another LIVE, STREAMING WebCam down there. He and I were up at the Banner Elk Winery yesterday, delivering yet another streaming camera. We’re firing these things up at a rate of about one a week here lately!

The Lake Tillery Cam will deliver some sweet live video of not only that gorgeous lake, but also a pretty cool ski shop there. NO, not a snow ski shop, but a water ski shop. We’ve been communicating for about two years with Brian Beachum from over there to install the camera system to not only show off the lake from his vantage point, but also to potentially show Brian doing some ski instruction of his own. Brian teaches children (young and old) how to water ski or wakeboard, etc. 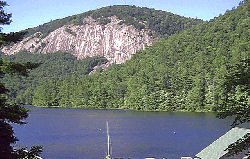 <Bald Mountain and the Lake at Spphire! This IS the shot we’ll get from the new LIVE CAM!

We’re expecting the new Sapphire Valley "Bald Mountain" Live Cam to go LIVE at some point this weekend. Ric Stargel is partnering with us over there to deliver some sweet lake shots to fans of Sapphire Valley and the Cashiers area.

The Homestead Resort LIVE CAM was delivered to the Hot Springs, Virginia resort on Thursday. I know Kenny’s hoping that new cam goes LIVE today. Regardless it SHOULD be LIVE within a day or so. We’re looking forward to providing you guys an awesome view of that luxury four season resort.

With all of this going on, Kenny asked me to step in this morning and post this morning’s "FirsTrax" story. Admittedly I’ve posted more stories over on GolfNorthCarolina.com over the past couple of weeks than I have here on our ski network.

As I was giving some thought as to what I’d write about this morning, my thoughts immediately went to – THE WEATHER. After all, THAT is what everyone is talking about. Joe Stevens and all of the ski area management peeps have been talking about the biggest obstacle to gaining big crowds at the slopes. It ISN’T the weather in and of itself. It’s PERCEPTION. There’s SNOW at the resorts. Plenty of it…and the the further north you look, the better the snow is. However, one look at Cataloochee Ski Area or Appalachian Ski Mountain will tell you that things look PRETTY good. Sugar is looking pretty rough in some areas – as is Beech Mountain, but there’s still good coverage and plenty of skiable terrain. 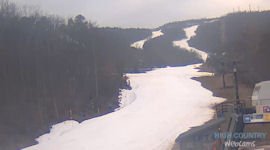 <This shot at Massanutten Resort in Virginia this morning shows narrowing trails, but nevertheless GOOD coverage across their slopes. You can ditto that by looking at HighCountryWebCams.com. One look at Sugar’s base cam will tell you that things are pretty nice at the bottom of the mountain despite some thin coverage and bare spots that are not being reporting by anyone other than us.

Just to be clear, NUMEROUS resorts are looking at thin coverage and some bare areas, and nobody is reporting them. It should also be made clear that there’s plenty of side-to-side coverage to play on at all of the resorts as well. Things might be looking a little "worn" everywhere, but there is plenty of good snow to enjoy.

Fighting the PERCEPTION that it’s so mild that there simply CAN’T be snow on the slopes is the battle that every marketing team at every resort is battling. Heck it was 67° in Banner Elk on Thursday. It had to be in the mid to upper 70s in Charlotte yesterday! When it’s that mild, people can’t help themselves. Heck, look at the way I started this story. I’m writing about Golf and the Lake. Kenny had to head out of town early on Thursday or he and I would have been playing tennis Thursday afternoon. For crying out loud!

As we were driving around Kenny and I both commented that we’d probably see a ski resort or two actually call it quits for the season within the next 7-9 days. Remember you read it here first. If people ON AND off the mountain are thinking about golf, tennis, the lake and chores in their own backyards, they aren’t thinking about skiing or snowboarding.

I’ve spoken to several of the ski area owners and managers in the last few weeks and while they’re all keeping their cards close to their chest, they’ve ALL said – "It hasn’t been a normal season".

I can only think of maybe three to four weekends this season when the parking lots were all full at Sugar – which during a normal season would have been overflowing eight to ten weekends. Appalachian’s traffic has been brisk – and even semi-busy weeknights with the local kids doing their thing, but even Brad Moretz shared the "It sure hasn’t been a normal season" comment.

I wouldn’t speculate on how "OFF" this season’s been in terms of skier visits and revenue, but I can tell you that’s it been WAY OFF for a lot of ski areas and "off enough to hurt" for some.

When you factor in the economy, quickly rising gas prices, and worries about whether there will be snow on the slopes this weekend or next – you simply can’t blame people for holding onto their money and perhaps delaying their getaway spending for a beach or summer trip.

During a NORMAL ski and snowboarding season we will see our own traffic (to SkiSoutheast and SkiNorthCarolina) rocket upwards in January , fall slightly in February and then drop about in half during March. This season we never really saw the "rocket upwards" in January as about one-half million of you visited the website. THE CRAZY thing about that is that our January 2012 traffic was about about 90,000 visitors over January 2011. That tells me that you guys and gals WANTED to hit the slopes in numbers that would have exceeded 2011’s.

HighCountryWebcams.com traffic has soared, but we’re thinking that has come from the addition of so many LIVE HD cams. Of course many are telling us that the cameras have also gotten so much coverage because people are revisiting them often to see WHEN they should hit the ski resorts. The weather just hasn’t been snowy and cold enough to excite the masses off the mountain.  We’ve had four meteorologists JUST THIS WEEK email me personally about using our cameras. We’re up to around 75 stations that are featuring them.

Our ski, weather and webcam presence saw 1,249,878 visitors in January this year which surpassed January 2011’s 1,099,087 totals. February 2011 saw 1,027,889 visitors compared to 837,272 so far through yesterday, February 23rd. With an average of 36,403 visitors per day so far in February it LOOKS like we’ll slightly surpass 2011’s numbers despite the mild weather. So it APPEARS that you guys want to hit the slopes, despite the gas prices and slackers in Washington. We just need a little cooperation from the weather.

After a 67° temperature here on Thursday and a 54° temperature this morning at my offices in Foscoe (it was 53° on top of Beech Mountain this morning) the forecast is calling for lows tonight around Sugar and Beech of around 23°. Snowshoe’s forecasted low tonight is 16°. So LOTS OF SNOWMAKING will be happening. Expect a blizzard to be going on across the entire region. That will make for super conditions across the region for this weekend. A PREMIUM will be on the ski areas that know how to work and groom the snow. Top money is on Appalachian, Cataloochee and Sugar in North Carolina; Massanutten and Bryce in Virginia; and all of the West Virginia and Maryland ski areas.

Some THUNDERSTORMS are forecasted for the mountains of North Carolina today and early this evening before ending with perhaps one-half inch of snow. The colder air is forecasted to hit mid day and you can bet that the snowguns will be firing as quickly as it makes sense to crank them up. I heard Gunther from Sugar this morning on the radio talking about how tonight’s snow could be anywhere from a dusting to a dumping, but that’s wishful thinking. We’re thinking not much more than a wet half inch at the highest elevations.

Resorts in West Virginia are looking at a more favorable forecast of "light rain" before 5pm and then 1-2" of snow tonight with ANOTHER 1-3" of snow for Saturday and Saturday night. By the way, it’s 50° at Snowshoe this morning as well.

The GOOD news is that the North Carolina and Virginia mountains should see snowmaking temps for tonight and Saturday night with an outside chance at a little more snowmaking Sunday night. The bad news is that there’s a little more wet stuff in the forecast for here Tuesday night through Wednesday night. Hence our prediction of a couple of ski areas looking to put an end to their misery a little early – by March 4th.

The West Virginia ski areas should be making snow beginning later today and then AROUND THE CLOCK as highs Saturday are forecasted to be around 20° and then down to 14° Saturday night. Sunday and Monday nights should be snowmaking nights there as well. There’s a little light rain forecasted for mid week and then some snow Thursday evening.

ANYONE WANT TO SUMMIT AT SNOWSHOE???

Okay, I’ve already lamented about this weather, the winter, the economy and I guess I could throw in a little discontent over how much lunacy is prevailing in Washington, D.C. on both sides of the aisle.

HOWEVER, WE’RE WANTING TO PARTY AT SNOWSHOE MARCH 2nd, 3rd, and 4th.

Here’s the deal. They CURRENTLY have 56 of 60 TRAILS OPEN. Snowshoe is BOASTING ABOUT SIXTY-PLUS FEATURES in their FIVE TERRAIN PARKS! They received 1" of new snow yesterday to take their February snowfall numbers to 20" and they’ve got FOUR NIGHTS of snowmaking ahead as well as 2-5" of MORE SNOW tonight through Saturday night. With that and some snow in the forecast for later next week – things looks great for our SkiSoutheast.com / Snowshoe Summit Weekend.

Snowshoe’s team has done a great job of matching the deals we’ve gotten over the last few summit seasons with 25% OFF all on-mountain lodging as well as providing all attendees with a FREE SUNDAY LIFT TICKET which is worth $59 per ticket. If there’s four of you in your party, that deal will save you $236 on top of the lodging savings. 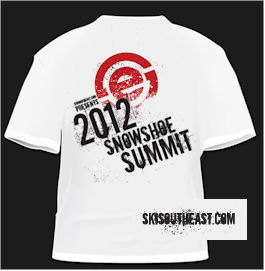 SkiSoutheast.com is throwing in a FREE SUMMIT TEE SHIRT for all who attend!

We’re up to 42 attending so far and YOU ARE INVITED! All you have to do is click here to see the details. You can also simply CALL Snowshoe’s RESERVATION LINE at 1-877-441-4FUN and mention the PROMO CODE "SNOW" and you’ll get the deal. Go over to the messageboard and let us know how many are coming with you so we can get you on the list for FREE SUNDAY tickets and tee shirts.

You can also simply EMAIL us at [email protected]  to let us know your board name and how many are attending with you and WE’LL get you on the list.

If you don’t have a messageboard name…it’s FREE! Simply goto http://www.skinc.com/messageboard/showthread.php?t=14905  and register. It’s FREE and its a great way to meet new friends.

If you’re coming to join us, be sure to share the Summit weekend with your snow loving friends as we should have good conditions and lots of fun for this last big bash of the season for us.