Closing out 2017 at Sugar Mountain 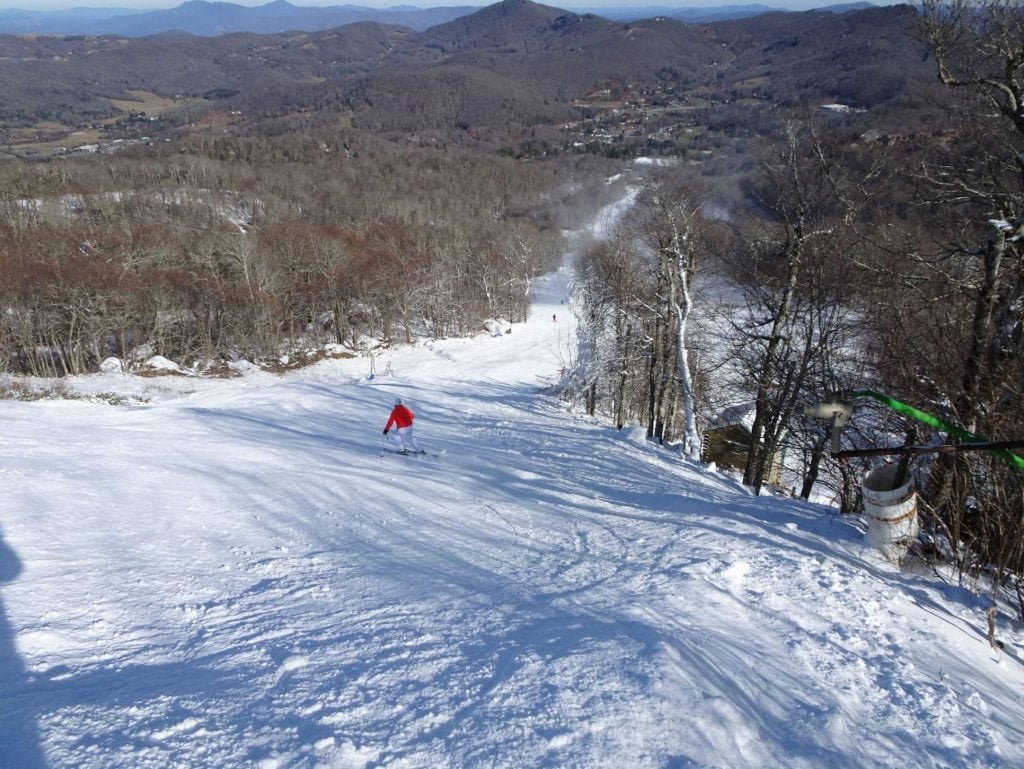 Photos and Story by David McCue

Generally speaking when I drive to the High Country of North Carolina I make my way to Beech Mountain – habit I suppose and the fact that a lot of my skiing friends have season passes at Beech. However, on Friday I broke my routine and took the left up to Sugar Mountain. Even from the road it was apparent that conditions would be good, top to bottom skiing of Sugars 1100 foot vertical guaranteed my three hour drive and 5 am departure would be justified; so the only question was conditions, trail counts and crowds. 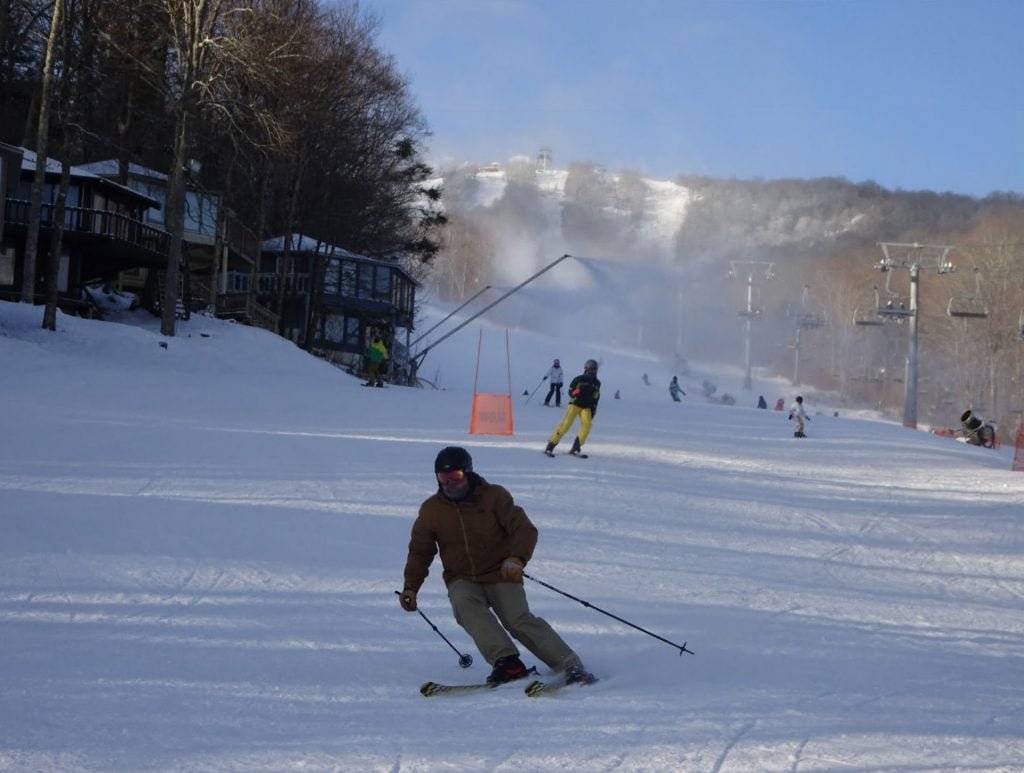 It took me two lift rides to discover that my favorite route down the mountain was actually open and ready to run. I was not expecting any of the three steep blacks off the top to be ready but was impressed to see how much coverage there was on Tom Terrific, still since I saw not a single soul upon it I assumed it wasn’t ripe enough to open. So I made my way to Gunther’s Way; only to discover it closed because of racing. This I confess was a blow, and oddly I was not invited to show my skills, an oversight no doubt, but the middle of the mountain was in great shape so I figured I’d make do with that. However, on my third lift ride I was told by a patroller that racing would conclude by eleven and that Tom Terrific was in fact open just gloriously empty. After two runs to myself, others discovered Tom Terrific but it remained excellent all day. The steep drop into soft chop and small features below, then opening up to the fast wide run at Upper Flying Mile was good and only slightly crowded all day long. 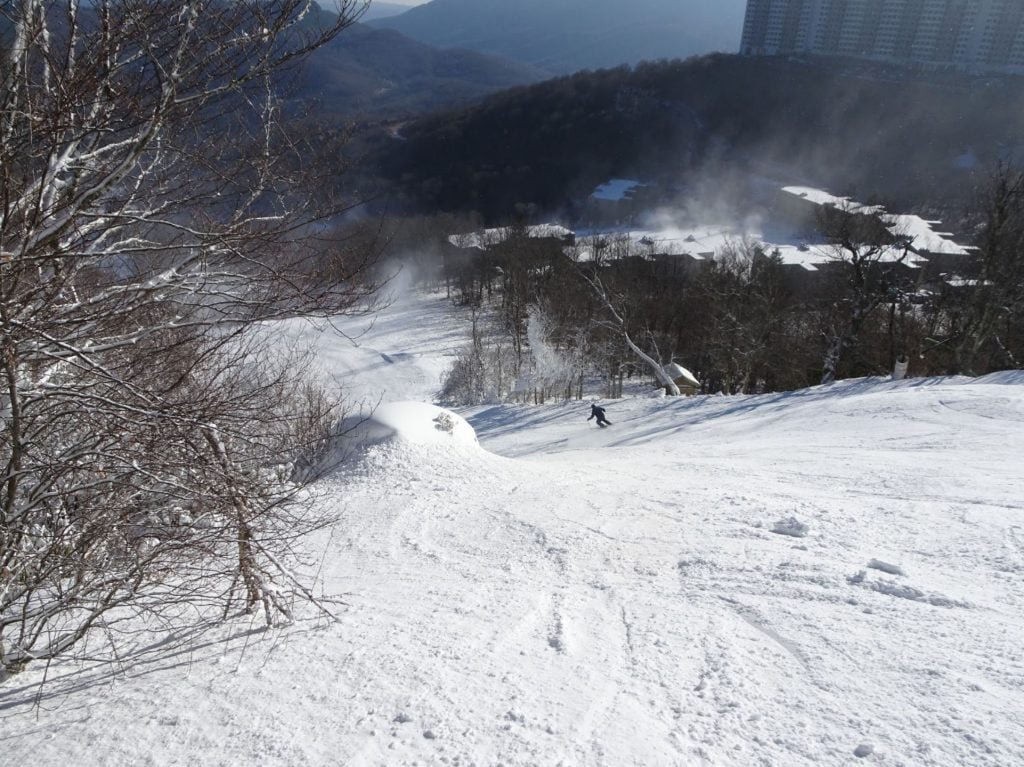 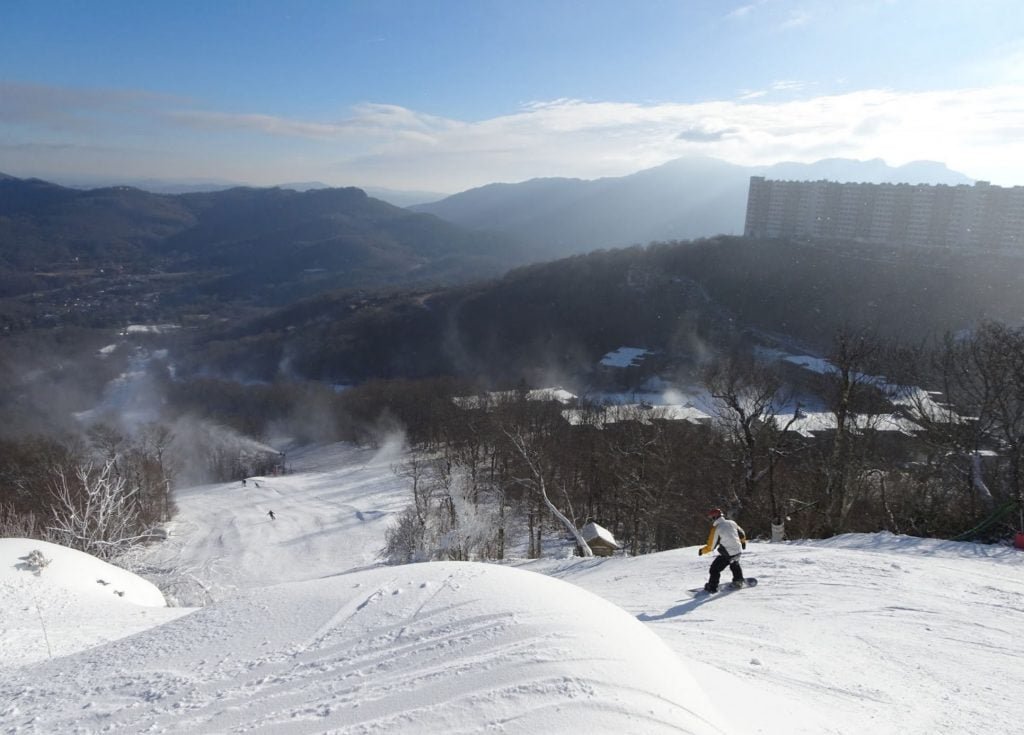 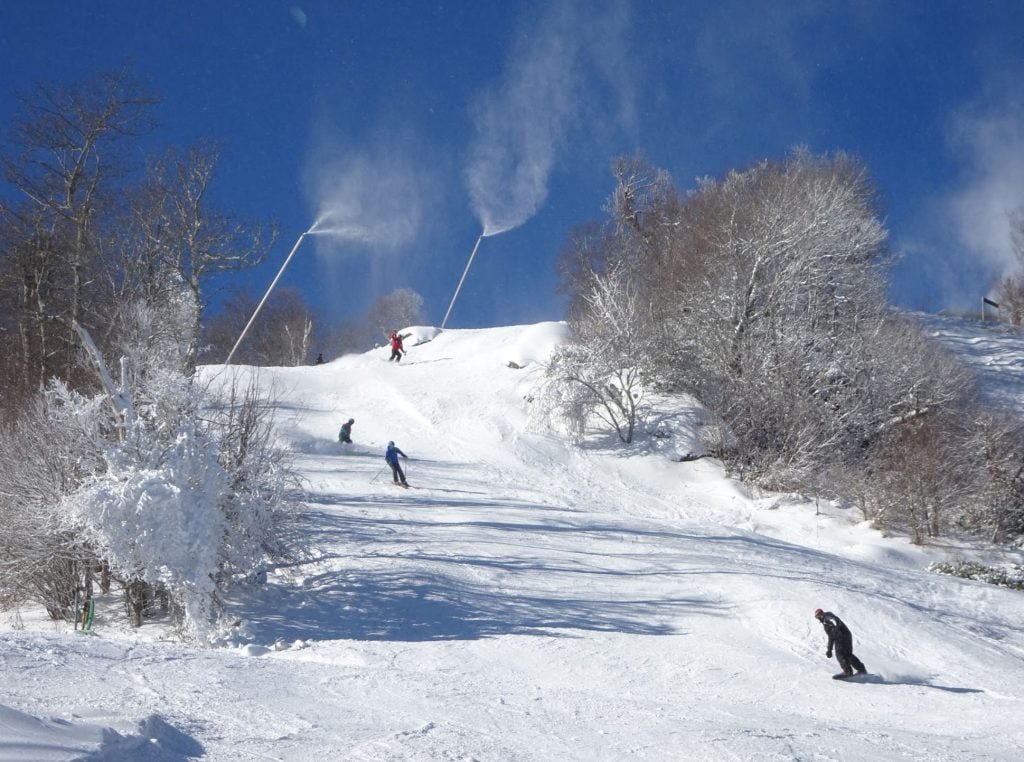 By lunch Gunther’s Way had opened, racing gates and center fence were removed and coverage was complete, which is saying something because this a very wide, long run. If you haven’t skied or ridden at Sugar in the two years since this opened, along with their high speed six pack, it’s a remarkable addition to some of the best terrain in the Southeast. The trail is designated as a bue-black, square-diamond which seems strange but actually makes sense. Three long steep rollovers with mellow transitions to regroup (or re-equip, I saw some spectacular crashes) make for a fast fun roller coaster ride. 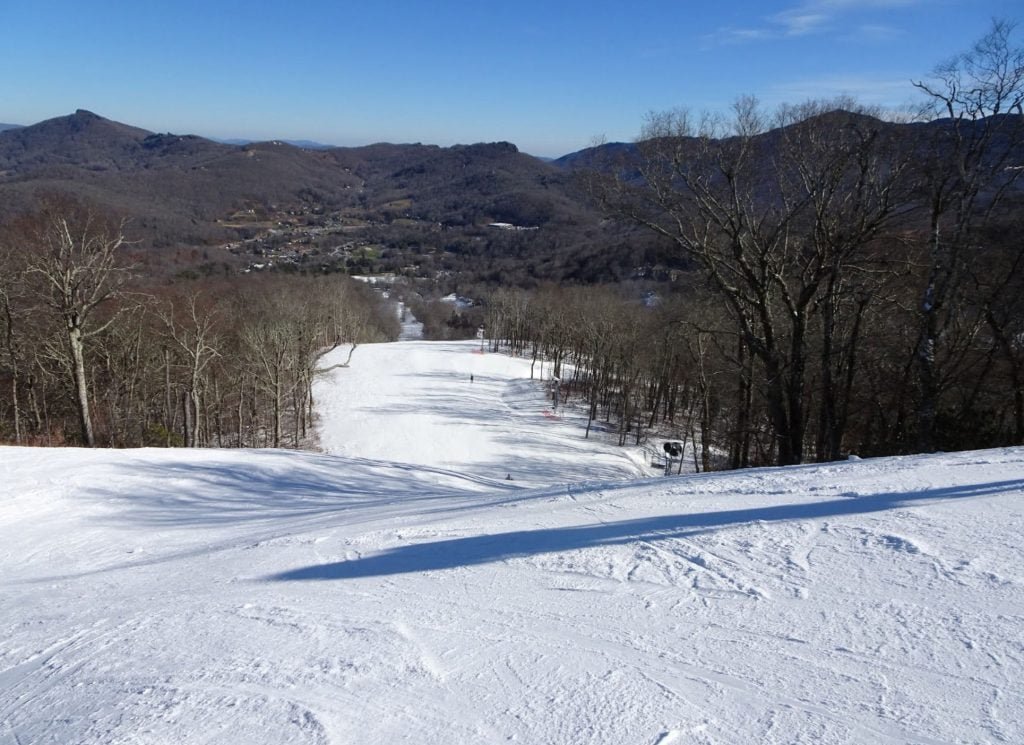 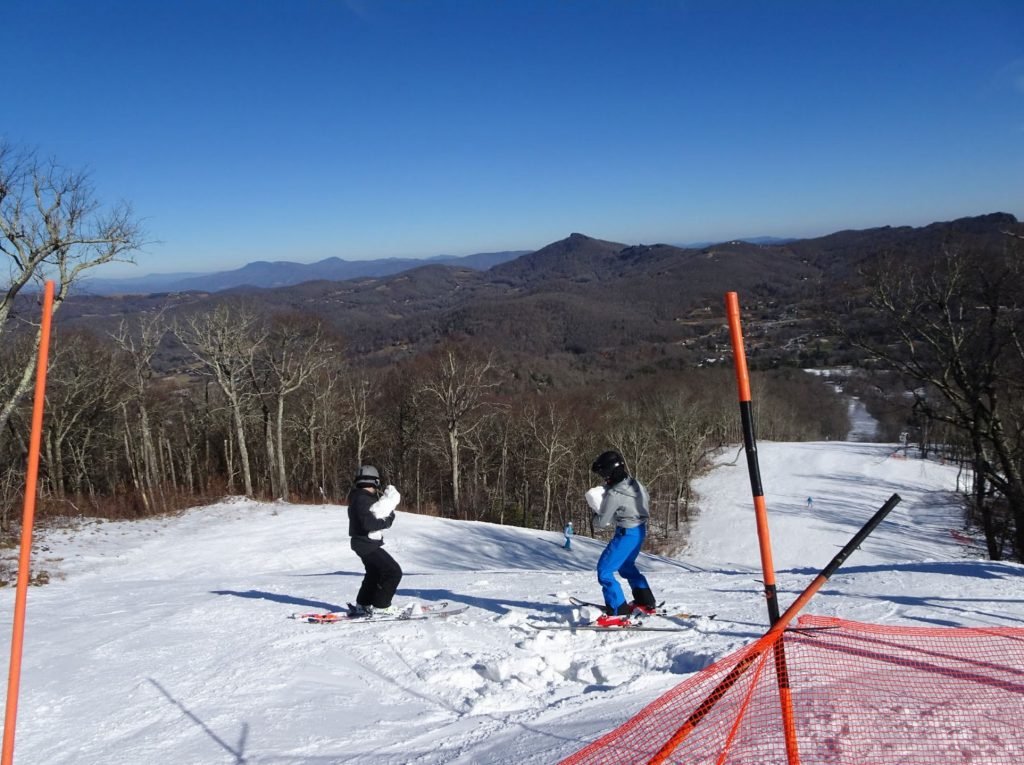 Throughout the day Sugar was running fixed snow guns but left the big fan blowers idle. This meant visibility was never a problem and you could always ski under or away from the sting and mist of snowmaking; meanwhile soft new drifts kept piling up along the sides. So conditions and trail count were were both in the bonus, leaving only crowds to consider and given the calendar I’d still rate that as a tolerable. 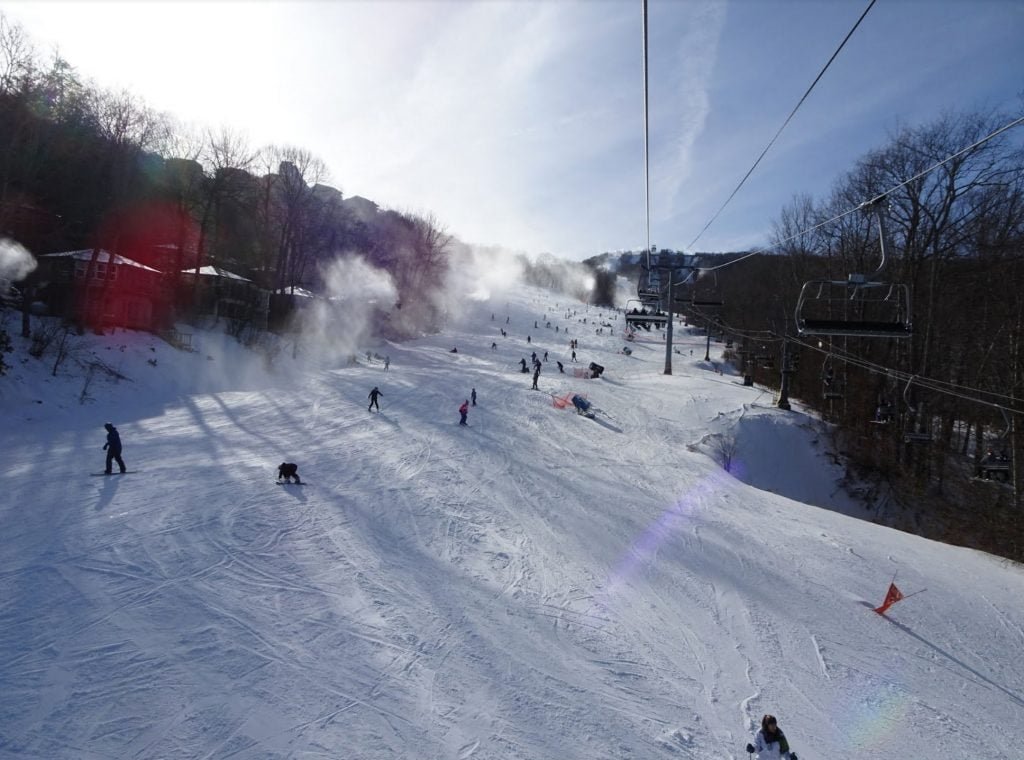 On the afternoon of New Year weekend Friday my wait never hit the ten minute mark and with a six minute ride to the top I kept on lapping runs till 4 o’clock. The result of the six pack highspeed is a mass of people on the slopes and it was lower mountain human dodgeball, opening Tom Terrific looked even better as Northridge, the other trail off the top, started filling to the choking point. The base area seemed to have an unusually high ratio of spectators so lift lines were never really what they seemed as I approached the end of each run.

Summit Express in the morning 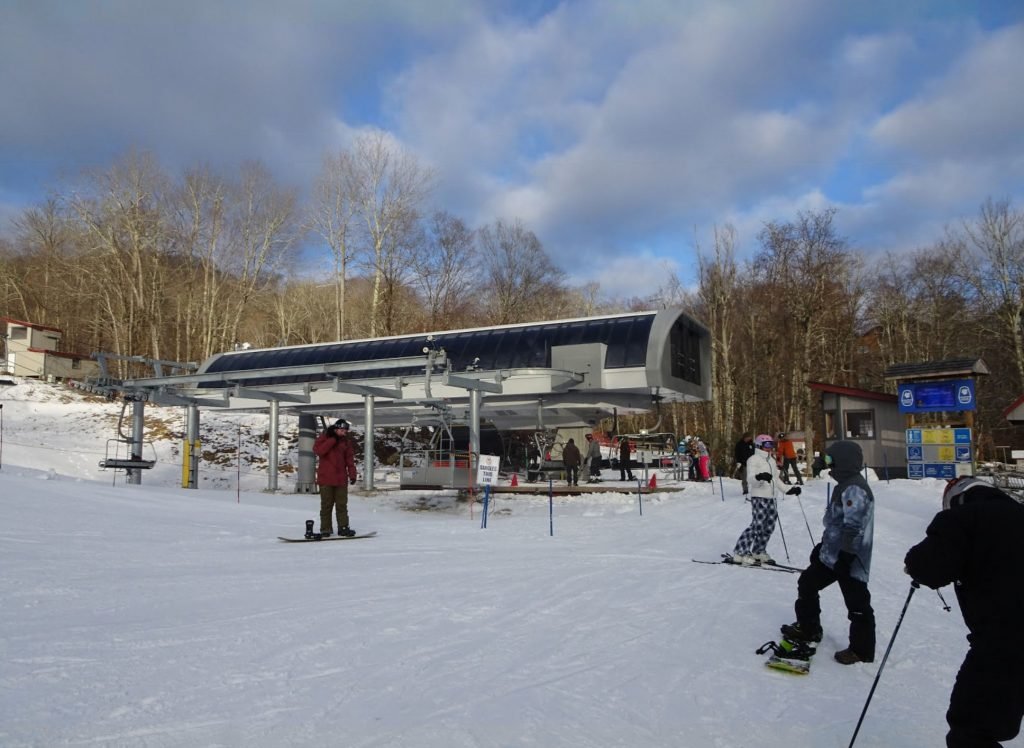 And in the afternoon, still less than ten minutes wait 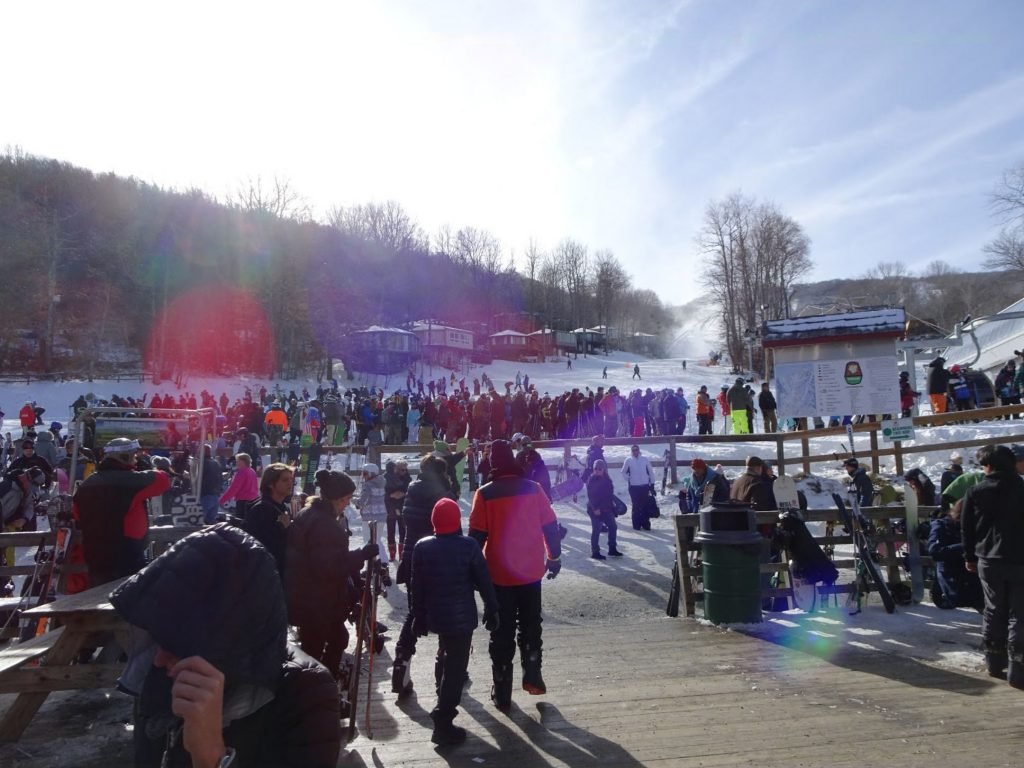 And to all those timid souls let me extend a special word of thanks, you keep watching and we’ll keep having fun. It was a great day trip and a turn I’ll make again this season.