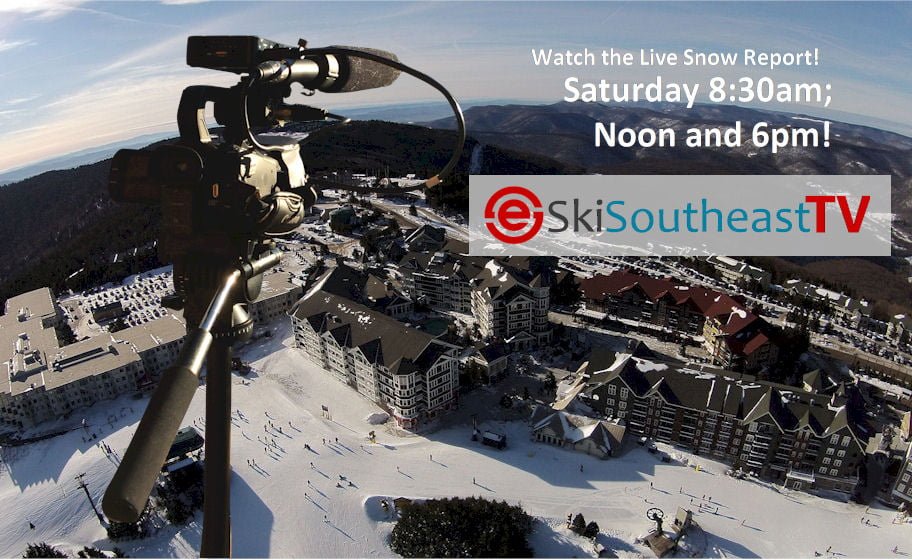 We’ve provided video that was shot LIVE at 8:30am and again at Noon at Snowshoe. We heard from some people that said that the morning report worked…but there was a hiccup. It’s kind of crazy but here at SkiSoutheast.com we are probably about one year ahead of the technology that will eventually allow us to broadcast LIVE from about anywhere.

Snowshoe has done an awesome job of “wiring the mountain” but unfortunately there ARE still “holes” in that coverage that prohibits us from being able to broadcast seamlessly. In about 1-2 years we’ll remind you guys that we were among the first to use WIFI to broadcast over the air, but right now…things are indeed spotty.

SCROLL BELOW THE VIDEOS FOR THE REST OF TODAY’S FIRSTRAX

Midday Update from The Boathouse at noon.

Host it and They Will Come…

This is an exciting day for us here at SkiSoutheast-land. With only a two week notice, anywhere from 75 (that we were able to confirm booked) to 150 snow loving souls trekked from all over the Southeast and mid-Atlantic to Snowshoe Mountain to hang with, drink & eat with, ski & ride with and to simply have a good time together.

For some who came in on Thursday night (sorry Kenny, Betsy, Lisa & Ben) they had the misfortune of getting stuck on I65 on Thursday evening for more than two hours. They reported that traffic on the interstate came to a complete stop. The four were in separate vehicles but both reported that they were stopped with no movement for over two hours and arrived after 2am.

For the rest of us who came up on Friday the drive was easy and gorgeous as usual with the snow-covered landscape all the way from about the time we exited the I77 tunnel across the WV/VA line.

My crew got up at 5am and hit the road by 6am and arrived on the mountain around lunchtime. We lucked into several of our rooms being ready to check-in and eleven of us were able to have lunch together at Foxfire Grill with NO WAIT!

The mountaintop was “SNOGGED IN” all day – but the same could be said for just about every high-elevation resort that I visited virtually via ResortCams.com.

Earlier on Friday afternoon SEVERAL of us had agreed to meetup at Silvercreek for some night skiing and snowboarding, but after a really long day (and a few brews) we ALL made the decision to bypass the night turns. We stayed in, ordered some awesome pizza and salads from Cheat Mountain Pizza in the Village and really by about 8pm several people began disbanding – headed to their separate rooms to crash.

That IS the way it goes sometimes. A person CAN have too much fun. From around 3pm-8pm our room was one laugh track after another and only a couple of Motrin and some shut-eye was going to cure the fact that my head and cheeks were hurting from laughing and smiling so much.

Saturday COULD BE one of the best Summit Saturdays that we’ve experienced to date. After 3-4″ of snow fell across the mountain Thursday into Friday…more snow is in forecast for today with some light snow and maybe even a mix of winter precip during the day. 2-4″ of snow is expected tonight which promises to make Sunday morning First Tracks all that much more fun!

I’m going to advise you guys to check out the SNOW REPORT for all of the details and then be sure to watch SkiSoutheasTV at 8:30am, NOON, and then at 6pm.

Until Next Time… feel free to email me: [email protected]