Christmas Magic is On the Way to a Ski Resort Near You! 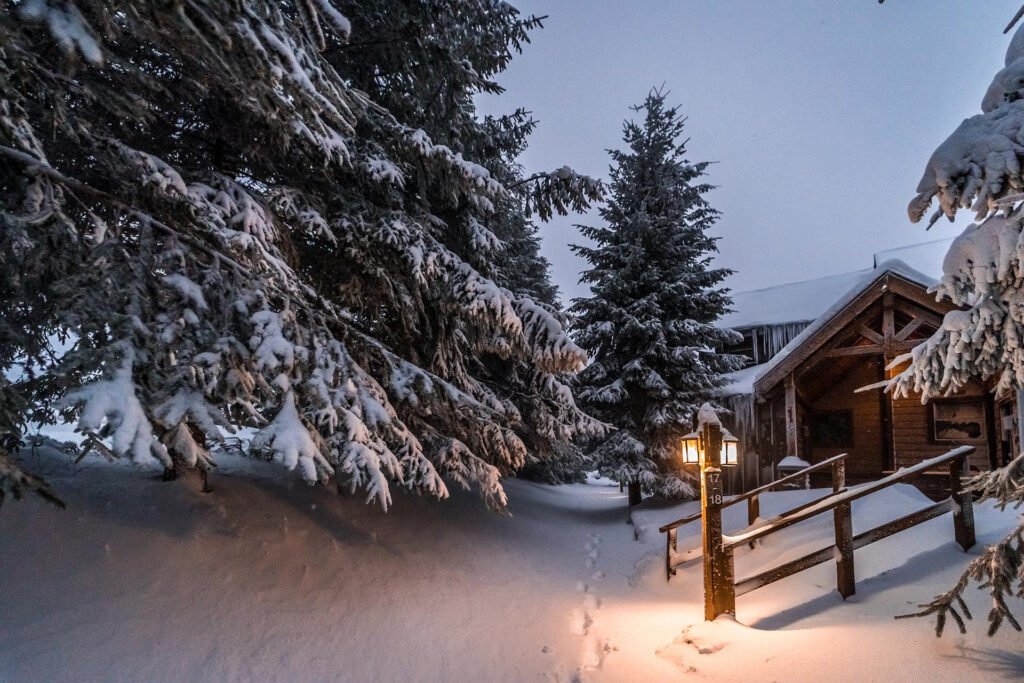 Today’s Featured Photo is from Steve Skarupa from up at Snowshoe Mountain while on his walk into work. Not a bad way to start your day, right? Steve does a nice job of sending us some of the sweeter shots from up at Snowshoe each season. Thanks Steve…

Before I dive into the Snowy Magic…be sure to check the SNOW REPORT for Christmas Eve and Christmas Day scheduling for all of the resort.

Today’s FirsTrax is as mixed with with good and bad news as the weather is first thing this morning. However, as has happened thus far this winter, the bad news will be very short lived and only mess with your plans if you are planning to ski or ride the early sessions until this afternoon.

It is never a good thing when you look around at all of the temperature gauges in the region and see morning temperatures in the 40° plus range. Most of our ski mountain communities have already seen overnight precip (in the form of rain) in the 0.5″ range and some areas are forecasted to see as much as 1-2″ of rain during the late afternoon hours on this yucky Christmas Eve.

Sapphire Valley has decided to close down completely today due to the heavy rain. The only other weather related announcement we saw was from Sugar Mountain which shared, “Lift operations may be suspended or delayed due to high winds.”

…and we COULD see that same kind of announcements from other ski areas, so check the reports often.

As I was looking in at the resorts via all of the LIVE webcams – all I could see was foggy, rainy, wet, miserable looking views.

Christmas Magic is On the Way

The forecast is for these 40° temperatures to take a huge, arctic nose-dive down into the 10° range at Beech Mountain and the higher elevations of the NC mountains and change everything over to SNOW. Christmas Day’s high is expected to be around 12°. (What a roller-coaster, right!?!?!)

…oh yea…and SNOW. We’re looking at probably 1-2″ of snow in the lower elevations and ski areas like Appalachian Ski Mountain, Ober Gatlinburg over in Tennessee and most of the Virginia ski resorts. We could see as much as 5-8″ of snow around Cataloochee and about the same at Wolf Ridge, and the resorts in West Virginia – particularly Snowshoe, Canaan and Timberline that usually hog all the natural snow. Right now it looks like Winterplace Resort will see anywhere from 3-4″ and there are some that are predicting as much as 4-7″.

So Up First…a Christmas Eve of Yuck.

The not so fun part of today’s forecast is a solid rain with fog (add wind). Rain could could be heavy at times this afternoon.

Then DRASTICALLY colder air crashes into the region around sunset changing rain to snow. The temperature drop is so dramatic a flash-freeze is likely on the roads during the transition to snow making. So if you can avoid travel after dark, that would be wise.

The way this system is timing out, it currently looks like we will see 5-6 hours of pretty moderate-to-heavy snow before it transitions to snow showers after midnight. Wind, snow showers, and flurries persist through Christmas Day.

As we reported yesterday and thus far from November through today, we could not have asked for a whole lot better, more cooperative weather pattern. In addition to 15-30″ of natural snow that has fallen across various ski mountains in the region, we’ve seen cold enough temperatures to make snow on 17 of the 24 days of December – at most of the ski areas.

So today will be a wet one. I can’t wait to check out the live cams and perhaps we’ll do a quick Facebook LIVE stream showing those hearty souls that weather the weather. Lots of snow and snowmaking will kick in later in the afternoon, and that will set us up quite nicely for a super Christmas-to-New-Year week.

There are some chances of some light “under-developed snow” (rain) during the week, but those days don’t look bad. If you have a week long ski getaway, you’ll almost inevitably get one day of wet weather in. However, things are looking really really great for the week ahead.

I’m sure that Brad Panovich and Kenny Griffin will talk more about the weather in the days ahead, but there are also some forecast models showing another possible winter storm coming in shortly after the first of January.

Here are some nice SHARES for your Christmas Eve enjoyment:

This morning they posted this on the Facebook snow report:

T’was the day before Christmas, and all through Timberline
The skiers arrived, though the weather was borderline.
The groomers had groomed all the ski runs with care
In hopes that some fresh snowfall soon would be there.
The weather man said “it’ll get here this afternoon.”
So don’t worry skiers & boarders, it’ll be here real soon!

Timberline Mountain received rain early this morning. Open terrain has been groomed, but you can expect to find icy conditions on the mountain today. The forecast calls for snow sometime later this evening, continuing into tomorrow. White today’s conditions are less than stellar, we expect Christmas Day to be a wonderful day of skiing and snowboarding!

THAT share was met with great responses, such as this one from fan, Tom Holliday, “What a refreshingly honest slope/snow condition report! Thank you!   Happy Christmas to all the employees working Christmas day.”

What a sweet turn around from the last several years up there….

Here are some leftover photos shared:

email me as you wish at [email protected]