CHEERS!! Put Some New Skis in Your Quiver 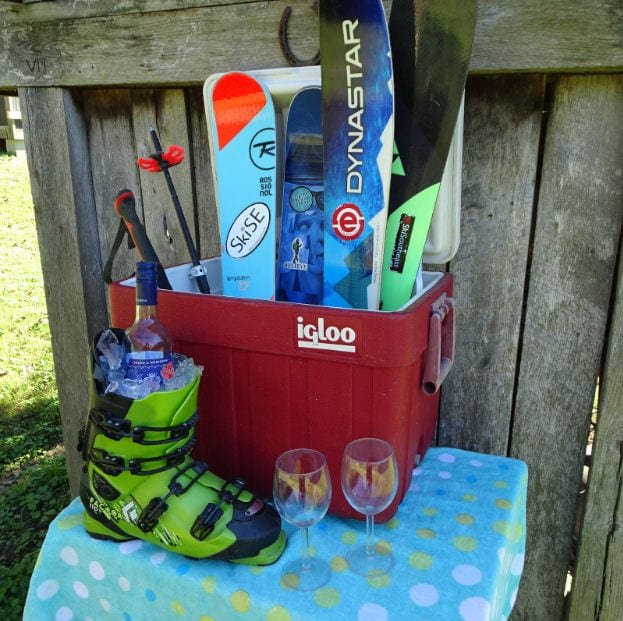 Best regards to fellow Southeastern skiers, Fall is here, and the game will soon be afoot. There is finally a chill in the air and I’m certain Winter is in the wings and waiting for center stage. A good leaf season? Honestly, I couldn’t say. Woolly worm death match outcome? Always a struggle to predict. Autumn appears to be our new hurricane season, but that should soon relent and if you ski or snowboard and can still find the remains of your garage, now is the time to check your quiver.

Definitions are in order:

Quiver (kwi-ver)
Noun: an assortment of skis intended to facilitate the slaying of any type of snow on all types of terrain
Usage: “my quiver is looking good, but I still need a mid-fat in case things get manky on my March trip to Greenland”
Verb 1: the process of acquiring more skis than you will ever need on any type of terrain
Verb 2: the active expectation of the season to come
Usage: “ I see you quiver with anticipation”

This might be optimistic, but we are a month away from putting planks to powder and now is the time for inventory and acquisition, or perhaps divestiture. Is it time for you to finally retire those beloved Olin Mark V’s? At the other end of the spectrum, perhaps the Mack Megatrencher 115 was a little over sized for the three days spent in Utah and three months in Southern Appalachia.

All this brings me to the details of equipment. The annual gear guides have hit the stands, mailboxes and ether. POWDER hit mine in August when it was still so hot I could barely blink, SKI was not far behind. The timing always seems a little cruel unless you have an end of summer trip planned to New Zealand or Chile. The gear guides are always fun if only to see how high hyperbole can soar. Actual improvements in equipment can barely keep up with the annual breathless hype.

Now that the industry assessments are out, and the new season’s skis are available, I thought I would review my experience last spring at the annual Outdoor Research/Snowsports Industry America trade show in Denver and more importantly the two day all you can try ski buffet held afterwards at Copper Mountain. The Denver part is always a little surreal, an overwhelming array of goods from hundreds of manufacturers. Wandering between the booths odd things stand out, like this … tent?

I’m not certain but am pretty sure that this is a back-country emergency retail pop up that can fit into a beer can and be deployed at a moment’s notice in the wild; don’t go into the Summit county back-country without it.

Walking through the gleaming rows, skis’ graphics are the first thing that stand out and manufacturers spend a lot of time on those covers. Whether it is to grab our attention, to brand their products, or just to provide a job for friends and family; there are clear cases of change for its own sake. For example, I was looking at a ski with a transparent top sheet to show their carbon grid which was laid out diagonally on the wooden core, a radical change I noticed from last year’s version which was, prepare yourselves …. perpendicular. I asked the rep if that improved strength or performance in any significant way; he assured me it made no difference at all.

But not all visual changes were so subtle. Armada for one has returned to an old school (by that I mean five or six years ago) cartoon-on-bad-acid look. I asked about this color scheme and they proudly told me that the designer was actually colorblind, which is at least as interesting as being diagonal.

Cosmetics aside, the gear is always evolving; and while the marketing may be vacuous, the people who design the equipment clearly are not. For mere mortals, and not the Angel’s and Candide’s of the world, our ability to ski most conditions with something resembling efficiency and grace is largely because our ability has received an automatic boost by how awesome almost all equipment has become. There haven’t been landmark changes in design recently, but materials and versatility continue to improve. It must be tough on the marketing branch who if honest would be forced into slogans like these: Stalwart Snowsports, every year we get incrementally better, or Whiplash Skis, our Graphics will make your Eyes Hurt!

If you recall, we had a spectacular January for ski conditions in the Southeast and were blissfully ignorant of the complete meltdown February had in store. On the other hand, when I arrived in Colorado at the end of January, conditions were at very low tide. Powder was hard to find and trying to test as many skis as possible kept my off-trail exploring to a minimum. This may have been a good thing to keep my recommendations focused on the kind of conditions we’d expect on a good weekend here in the Southeast where deep powder is usually scarce.

In an era when almost all skis are good to excellent, it’s actually the bad skis that stand out; so choosing among the good ones is largely an issue of an individual’s skiing style and terrain preference. A ski’s personal fit is an alchemy of factors like width (referenced by how wide it is underfoot), profile (the shape along the edge) and rocker pattern (the shape of the ski’s bottom). A skier dedicated to racing and another who seeks only the deep pow, would choose completely different skis. Most of us are somewhere in between. In that middle ground lies the dream of the one ski quiver; one ski that will work any day, on any terrain; the platonic ideal of a ski. And with that grand aspiration in mind, I have two skis that I now officially covet and can highly recommend. Let me give a déjà vu disclaimer first: these are both skis that I recommended last year, and yet they aren’t.

Rossignol has a New Experience in Store

Rossignol is old, iconic, and an industry heavyweight. A few years ago as part of their 7 series they introduced the Soul 7; a wide, shaped ski that’s a long evolutionary step away from their European racing roots. It has proved to be one the best sellers of all time. I own this ski and love it. Rossignol has continued to make incremental improvements, especially making it damper (less chatter and slap at the tip), so I would still recommend it. But the Rossignol Experience was an eye opener for me at last year’s demo. I skied the 100 width and kept it out for rare extra runs. It was a charging monster and I found a deal during the summer and jumped on it. But over the season in the Southeast, I never quite found that love again, oh well. Still in Denver this Spring, I checked out the series again and could tell it was thoroughly remade. That is one of the advantages the big companies have; the resources to start fresh and turn a product around in a season. I skied it again at Copper and I have to say they nailed it.

The 2019 Experience series tops out this year at 94 mm width instead of the 100 of last season, and I wish I could make a trade. The side cut is still deep, but it engages a little further from the tip. The tip is also lighter and rounder (my 100 is distinctly blunt); and while I did not find any that weekend, I am sure it will swing easier in soft snow when we get it. This is a much smoother ski than the previous version; not because it is softer, but probably because the new design has eased some sharp points in the profile and the flex. I tried the Experience94 but think the 88 would be the best choice for these parts. I simply will not own or recommend a ski that cannot float with powder; the 88 is getting narrow for that, but it still has enough front (127mm ) and back (117mm) to work when we do get a good storm. The Rossignol Experience88 is my top choice for a one quiver Southeast ski.

Being a major brand, Rossignol is widely available at shops throughout the region, so get in the car before you pick up the mouse. Local shops can match or beat what you will find online. As an example, Alpine in Raleigh is my closest shop that carries Rossignol and they sell the Experience series for fifty dollars less ($604) than any of the online outlets I checked…. and they are humans of the local kind. There is no economic reason not to buy from your local ski shop and a lot of good reasons to support them.

Among the wider skis I own, the Rossignol Soul 7 remains a favorite; but that ski might not exist without the pioneering work of the much smaller company DPS, still made in Salt Lake City, Utah. It was DPS founder Stephen Drake that coined the term “rocker” around 2002 to refer to his newly designed skis with upturned tips and tails. This shape is now almost universal; dramatically visible in powder skis, but seen to some lesser degree on skis all over the mountain. A lot of other small pioneering companies designed and made skis that revolutionized any wide ski you are enjoying today, or any light touring ski, but DPS stands out. Bamboo cores and aerospace grade carbon fabric sounded exotic only a decade ago but now virtually every ski maker at least dabbles in the physics of carbon mesh string theory.

For three years now, every time I have demoed a DPS ski at some point in the run I grin and feel certain that it’s the best I have ever had the pleasure of skiing. This time on their most recent Alchemist Wailer 106, that feeling never went away. I needed no further confirmation; this is the funnest ski I have ever been on. It inspires confidence and playfulness on every type of snow from hardpack to moderately deep powder. You can lean into a strong turn or spin off the tail with slight shifts in your stance. You can find and change your own style each time down the mountain or through a new set of trees. Light but very strong it’s the culmination of decades of innovation, material and design from DPS. My only hesitation, which has kept their skis off my number one spot each year, is the price tag. The light weight gracefulness carries the anchor of a $1200 plus price tag. And people don’t give these skis up, nearly new same year DPS planks are a very rare find.

Now everyone knows what I want for Christmas.  If you are feeling generous, I would appreciate the Wailer A106 in the 178cm length.