CHANGE CAN BE A GOOD THING 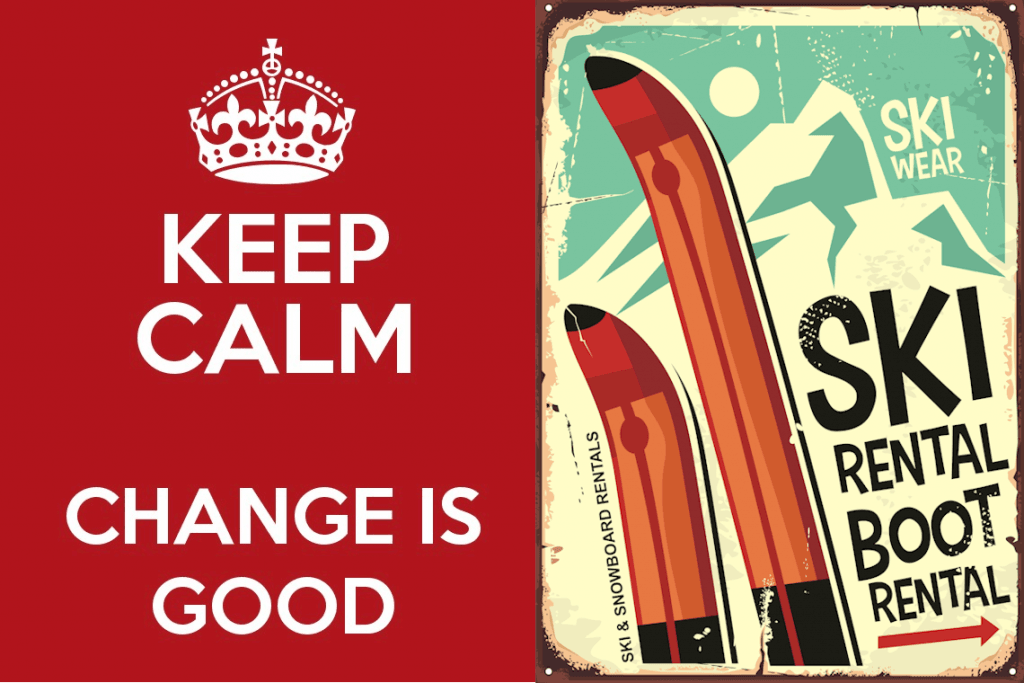 So I was checking the SkiSoutheast.com site the other day – something that I do every day to make sure I am up to speed on what’s happening in the region. Low and behold I notice a significant change at the very top of the web page, a new logo. Not only a new logo, but a really cool logo.

I got on the horn with Mike at the website’s headquarters in Banner Elk, North Carolina to congratulate him and his team for the new image. I am not one who likes changing something for just for the sake of change. For the most part, if the tire isn’t flat, why change it? But then there is the saying, you can teach a new dog new tricks, too.

The new logo for the website got me to thinking that this was another case of an industry leader trying to either keep up with the times or being out in front of the times. Think about it folks – in years past, if a January thaw had hit the resorts like the one we had earlier this year, I really believe that a number of them would’ve closed for an extended period of time. Not this year or years moving forward, with the advances in snowmaking, resorts can make a lot more snow in a shorter time period. Due to the fact that more snow can be made, stockpiles can be placed in strategic locations around the resort so that when a thaw does occur, there’s some snow that can be used as a back up.

There are all kinds of advances in the snow sports industry that have made the sport more fun for everyone. One of the biggest changes in the last twenty years has been snowtubing. Just about every resort in the southeast has constructed a snowtubing hill, thereby offering another way to slide on the frozen water. What snowtubing has done for the industry is to allow everyone to take part in the sport. I mean, everyone knows how to jump on something and head down a hill. I can see it now, somebody was on a lake somewhere and saw a tube being pulled behind a boat and thought, why can’t we do that on snow. Snowtubing was then born. The coolest thing about snowtubing in this columnists’ eyes is when I see grandparents being able to play with their grandchildren on the snow. Again, that’s just way too cool.

Now let’s get to one of my favorite aspects of change in the sport, snowboarding. I am amazed that I still get asked by reporters how much snowboarding is going on or will skiers ever accept snowboarders on the slopes? What most people don’t realize is that snowboarding has been with us now for over three decades. It got really popular at a time when skiing was losing some numbers and it put some new life back into the industry. Snowboarding is now accepted every where and in Olympic Freestyle competition, there are more eyes on that, than on some of the ski races. Another time that change was extremely good for the industry. There are those out there that will never accept a snowboarder going down the slope side by side with them and that’s okay because change will never occur for them.

Switching to skis now, there was a day when longer was faster and better. Now, take notice out on the hill these days, those 207 or 212 skies have given way to the shorter shape skies. What this has done has gotten new skiers up and having fun quicker and getting ahead of the learning curve. It has also opened up a lot of doors for freestyle competition. When resorts were first building jumps and features, they were thinking mostly of snowboarders, now with the shorter skies, well, the parks are available for everyone out on the slopes these days.

How about changes in clothing for having fun on the slopes. I got involved in the sport when one-pieces were all the rage. I am happy that has gone by the way of the real long skis. Color has always been a part of the fashion trend on the slopes but sitting back and looking around in the Winterplace cafeteria the other night, I was seeing a lot more whites and dark colors. But the best thing is how the up to date clothing allows skiers and snowboarders a chance to enjoy their time on the slopes, even when conditions are not the best. I don’t see many folks wearing jeans these days and I think it only takes one time of falling and getting pants wet to solve that problem.

How about those gloves you are wearing? I truly believe I have seen people spend a ton of money on clothing, like pants and jackets and then buy a cheap pair of gloves. I know from experience when my hands get cold and wet I am worthless and my time on the slopes has come to an end. When my son first started skiing, the first thing we bought for him was a very good pair of gloves. Many a time a friend would have to stop skiing and he was able to make to though the rest of the day.

I guess my point here is that a lot of us fight change in many ways of our lives. but at least the folks that are in position to make changes in the snow sports industry have championed the thought of change to make the sport that many of us love much more fun when we are on the slopes.

Finally, thanks Mike for changing your logo, you gave me my idea for this week’s column.