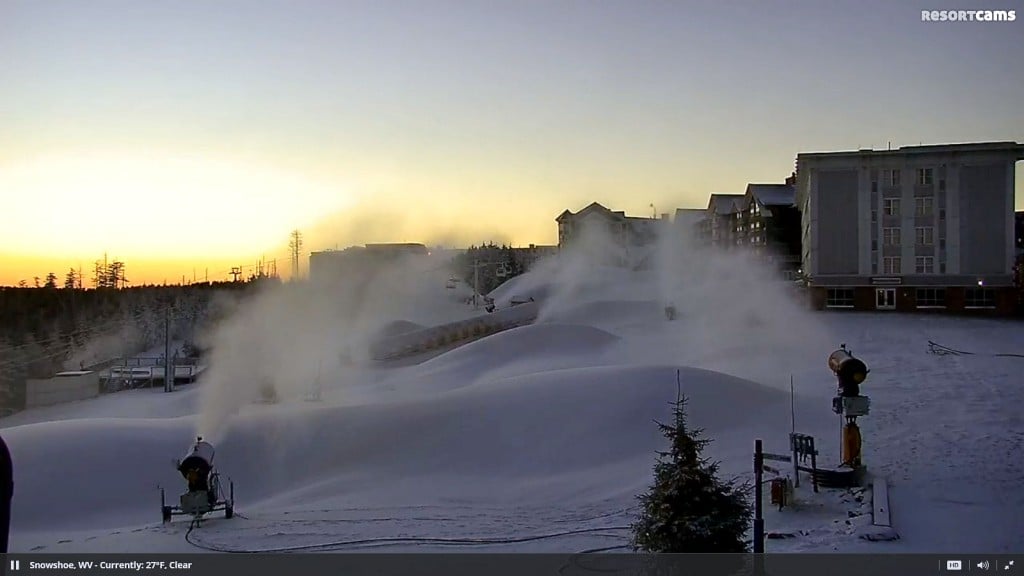 Cataloochee Ski Area and Sugar Mountain Resort reopen today. Sugar is open with 4 slopes and trails and Cataloochee Ski Areas will operate with 5 slopes and trails. Appalachian Ski Mountain will have their ice rink open (as does Sugar) but App looks to be holding their reopening off for another day. We noticed that they did make snow overnight although they’re not reporting that on their website. It looks like they put down a lot of snow making but not as much as they’d like to reopen the slopes.

It looks like they are waiting to reopen Saturday when they will also be celebrating their 54th season of skiing as they roll back ticket prices to their 1962 prices of $5 lift tickets for day sessions both Saturday and Sunday.

So Cataloochee and Sugar are the only two ski areas open for Friday turns.

Temperatures are about as consistent as I think that I’ve ever seen them from Wisp Resort in Garrett County, Maryland where it is 27° this morning, to 26° at Massanutten in Virginia, to 27° at Ober Gatlinburg in the Smokies, to 27° at Sugar Mountain in Western North Carolina.

The “warmest” temp we saw this morning was being reported by Cataloochee’s website at 31° and the coldest spot was atop Beech Mountain Resort’s 5506′ elevation at 24.8°.

Interestingly those 26°-27° readings at all of the Virginia resorts must have just happened early this morning as ONLY Wintergreen Resort was making or made snow. Wintergreen was making snow as of 8am.

We watched as Massanutten Resort turned their snowmaking equipment on for their tubing hill, but after just a short round of snowmaking, the guns were turned back off. 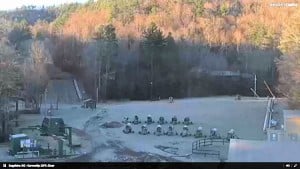 We also witnessed an arsenal of snowmaking guns at Sapphire Valley, but no snowmaking despite the temps.

It looked like Snowshoe Mountain Resort in Pocahontas County, West Virginia had the most optimal overnight temps as they put down some whales of snow overnight. (See photo at the top of this story!) They continue to pump out mountains of snow as of this post.

Remember that you can see ALL of the ski resort webcams by clicking here: Ski Resort Webcams

Here’s the Tour for today…going generally from North to South:

Wisp Resort – 28° – making snow and opening as soon as possible. We are installing a NEW, HD Streaming Camera at Wisp next week and we will be giving away a couple of winter getaway ski vacations to Wisp Resort this winter. Stay tuned.

Snowshoe Mountain – 27° – A Trace of natural snow and they are making tons of snow and will be opening soon. Snowshoe isn’t reporting it but they’ve seen 1″ of snowfall on the season.

Canaan Valley and Timberline Resort – 23° and they’ve seen a TRACE of snow in the last 24 hours and 2.2″ on the season. They are making tons of snow and will be opening within the next week, weather permitting.

Winterplace Resort – 22° and making snow! We saw the lift running this morning and got excited. They look to open soon.

Ober Gatlinburg – 27° – made a little snow and their tubing hill is open. They hope to open mid-December

Sugar Mountain – 27° – As mentioned, they made snow and will as long as temps allow today and they are open to the top of their mountain with 4 slopes serviced by their new Summit Express lift. Ice skating is open as well.

Sugar is the only ski area open for night skiing tonight.