Cataloochee is Open; Sugar is Closed 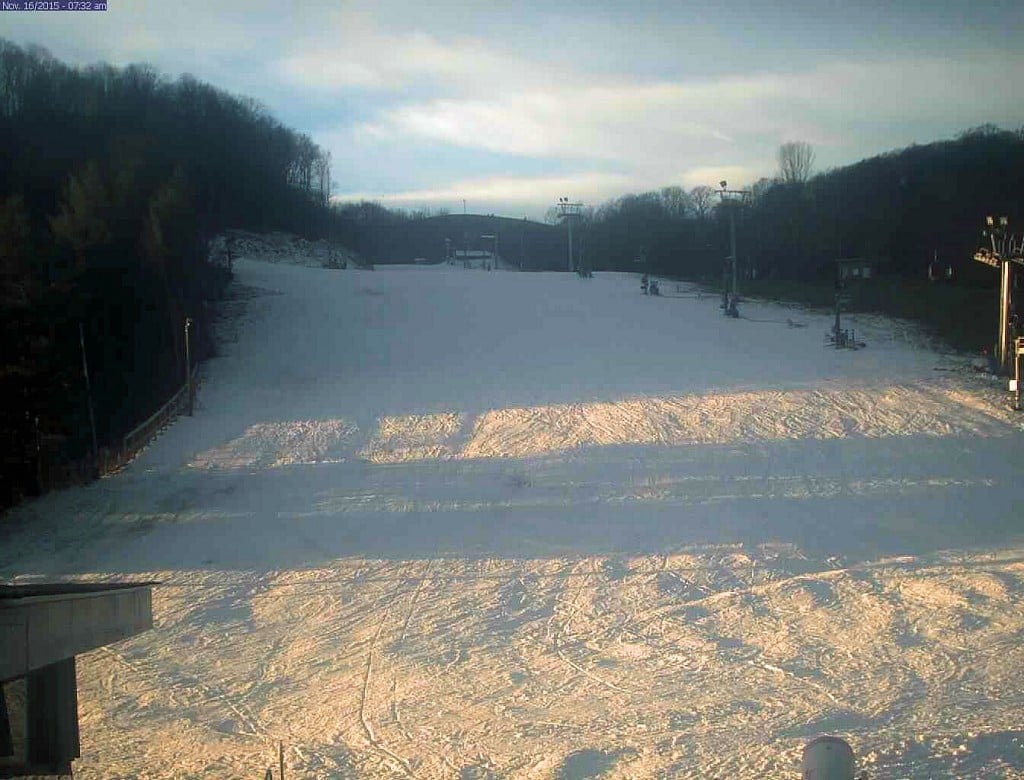 Sugar Mountain is closed today. Their fun lasted one day. That leaves Cataloochee Ski Area as the only resort open in the region. Both opened on Sunday and THAT was an accomplishment since both ski areas had nominal conditions with which to make snow the day before. It was a testament to the enhancements in snowmaking technologies to even be ABLE to make that much snow in a limited amount of time with borderline conditions.

Heck we saw Sugar making snow midday Friday when the temps were hovering around 35°-36° on most of the mountain.

Things look pretty good at the base of their mountain…but we have our doubts that they will be ABLE to remain open all week. It’s actually pretty amazing that they are operating today. Under normal, early-season dates Cat is typically open weekends only…so staying open for the next few days is a departure from their normal opening day gameplan.

Cataloochee is open for day sessions today with 4 slopes, serviced by 2 lifts. 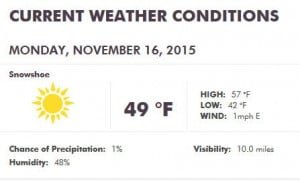 49 degrees means no snowmaking at Snowshoe today…or anywhere else for that matter.

…and it is 36° in Charlotte (flatlander) North Carolina.

It is 47° at Cataloochee this morning.

The most frequent email that we’re getting right now relates to whether or not there will be plenty of snow on the ground for the Christmas ski getaway crowd. Thankfully we’re still some six weeks away from that period and a lot can change in just a couple of days…much less six weeks. So we’ll just advise those of you with Holiday travel plans to keep checking back every few days and we’ll certainly answer those questions in time.

TYPICALLY things look pretty winter-wonderland-like in the mountains by mid December and the winter forecast is for a colder and snowier winter. However, this winter is also forecasted to be a rather volatile one and that could mean HUGE swings from great to not-so-great conditions. So this could be one of those winters where we earn much respect around here by providing the most up-to-date and accurate conditions daily.

The question right now SHOULD BE when will the rest of the resorts not named Cataloochee get open and stay open? For that answer, we’ll look no further than Weather.com to see what kind of consistent snowmaking temps are forecasted for the area. For the purpose of this post I’ll take the typically colder, 5506′ elevations atop Beech Mountain.

There HAS been a slight tweak to the colder side of the forecast for Beech beginning Monday of next week. November 23rd we could see around-the-clock snowmaking ops with highs around 35° and lows around 24°. There appears to be five of the next seven nights (after November 23rd) where we could see snowmaking going on. THAT would be consistent enough snowmaking to get some ski resorts opened up for Thanksgiving Day and/or weekend skiing and snowboarding.

So we’ll hang our hat on that forecast and hope. We COULD see SOME snowmaking this Friday night…but nothing really this week and this weekend looks borderline as well. So we’ll keep our fingers crossed and hope for some Turkey Day skiing and snowboarding for the resorts that would be open anyway. I say that because there ARE some ski resorts who are not scheduled to open until early to mid December.

Be sure to check our SNOW REPORT for those dates.

Snowshoe Mountain posted this pretty cool video of their “surprise snowmaking ops”. Check it out.