Cat and Sugar Opens! Here’s the Latest on all the Rest! 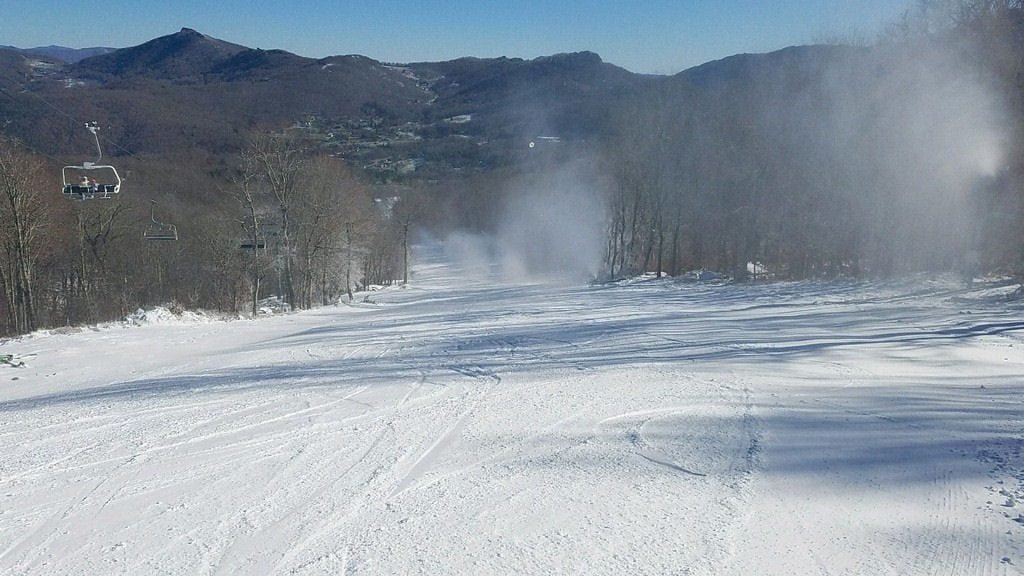 Man, when the snowguns crank up or when a little natural snow falls from the sky, you guys get stoked! When both take place, it’s like an immediately amping up of “winter vibe”!

As I type up this morning update, my buddy, Ron Kent (who happens to be a realtor if any of you reading this is interested in a home or condo up here in the Sugar or High Country area) sent me these photos from Sugar this morning. I promised I’d share what he sent!

(For all of you who either frequent our ski areas regularly (and especially for those who work at the mountain) SEND US your photos and videos. We’ll post them. There is no better way to share news of your favorite ski hill than right here at SkiSoutheast.com)

Cataloochee Ski Area – no longer making snow as the temps have moderated but they made enough on Sunday and overnight to OPEN today with a base of 12-14″ of manmade snow on 2 slopes serviced by 1 lift. No night sessions.

Sugar Mountain Resort – As mentioned they made snow pretty much around the clock and opened today with 4 slopes, serviced by the speedy, 6 person lift and a base plenty deep to enjoy.

Snowshoe Mountain – 19.2″ and they have made more snow since they began than all of the other ski mountain in the region together. The simple reason is because they’ve been able to. Temperatures have been pretty cooperative there and they’ve taken every advantage of it. They have not claimed the natural to date as they tend to only report snow once they open. HOWEVER, since we report snow…period…I can tell you that officially they saw 1″ in the last 24 hours, 1.5″ from the weekend “storm” and 6″ on this pre-season.

Appalachian Ski Mountain – blasting their slopes like no other resort can in a short amount of time. There is a BLIZZARD of snowmaking happening there today for their Wednesday opening. Remember, to celebrate the start of a great season, App Ski Mtn offers a FREE ski ticket to the first 100 guests to the Ticket Cashier Window on Opening Day! BE EARLY!

Beech Mountain Resort – 20° and blasting the slopes for their opening on Friday. They reported 1″ of new snow over the last 24-30 hours and that takes them to 2.0″ on the new season.

Canaan Valley Resort – 1.4″ of new snow fell, to add to the 1.3″ from the previous 24 hours. That makes 2.7″ for those of you who don’t like math 😉 and that takes Canaan to 11.2″ of snow since September 1st. Lenora Testerman posted, “Snowmaking continues this morning at Canaan Valley Resort. Check out the webcam 24/7 and watch our snow makers hard at work. Ski area opens December 15th for 17/18 season.”

Ice skating will be open this weekend.

Timberline Resort – There is no question that Timberline is making snow, but there’s no report coming out of the resort just yet and there camera is dead. They plan to open December 15th.

Wisp Resort – 28° – Probably the most anticipated snowmaking startup due to the pent up desire by their fans…Wisp began making snow over this past weekend and continues to as of 11am this morning. They will open as soon as possible. The long range forecast for the Garrett County ski resort looks pretty awesome with snowmaking possible on what looks like NINE of the next twelve or so nights. That could get them open as early as Thanksgiving Day or this weekend. But they’ve been catching so much heck from anxious fans (that’s a good thing) that we’ll just report what we hear, when we hear it.

Bryce Resort – 42° – Bryce made snow last week but the temperatures have not filtered into that part of Virginia. No snowmaking last night. Probably will await the cold temps that are expected Wednesday night to make more snow.

Massanutten Resort – 34.2° and no snowmaking although they made snow overnight. They will open as soon as weather permits. Should make snow Wednesday and Thursday nights and again late in the weekend. Kind of think they will open shortly after.

Ober Gatlinburg – 33° – They have made some snow on the slopes but it is usually mid December before they open for skiing and snowboarding. They ARE OPEN for snow tubing and ice skating with the best skating rink in the region.

Omni Homestead Resort – 33° and waiting on the cold to hit. Have not made snow yet this preseason.

Sapphire Valley Ski Area – 46° and they have not made snow yet. They typically wait until mid month to blast their two slopes and tubing park to open right before the Christmas to New Year Holiday period.

Wintergreen Resort – 33° this morning – They made snow recently but it’s looking like they will have to wait until possibly late this weekend when the next possible cold snap hits to crank the guns up.

Winterplace Resort – 35° – They saw another TRACE of snow and have made some snow, but they’ve been just out of the cold air mass and as such they are waiting on the next prolonged period to make snow and open. The long term forecast may include a couple of nights of snowmaking in the next 4-5 days but then they may wait until the colder air hits around the beginning of the month.

As always, keep checking back for the latest news on snow, snowmaking, weather, LIVE ski cams and what’s happening at your favorite ski area…and email me anything, anytime (except viruses) at [email protected]

…and be sure to visit: www.ResortCams.com and www.HighCountryWeather.com for LIVE information from your ski resort of choice.