Canaan Valley Question: If We Build It—Will They Come? 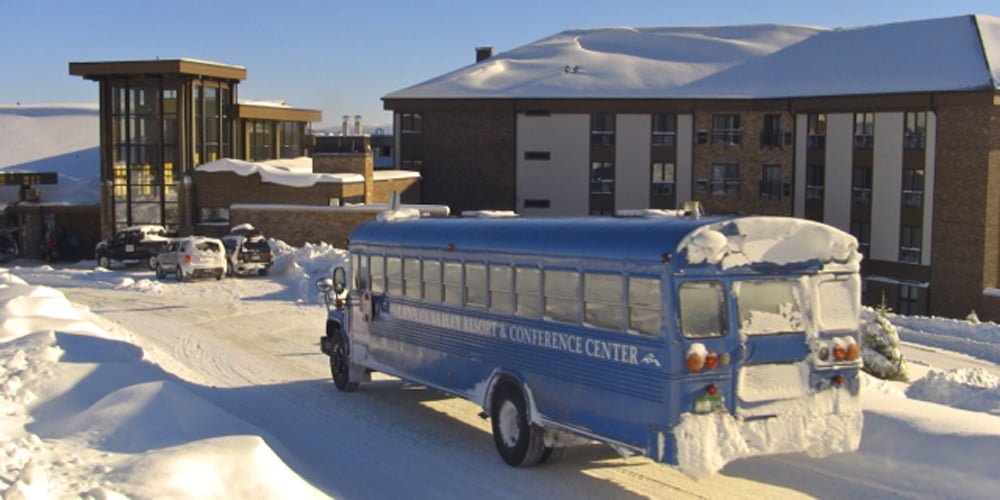 Last weekend I thought I was seeing  ghosts during the big blizzard at Canaan Valley State Park. Through the flying flakes I saw three of the park’s five old motel buildings still deteriorating in the snow, devoid of electricity and running water. Compared to the modern new four-story resort hotel where I was staying, it’s downright amazing how far Canaan has come. 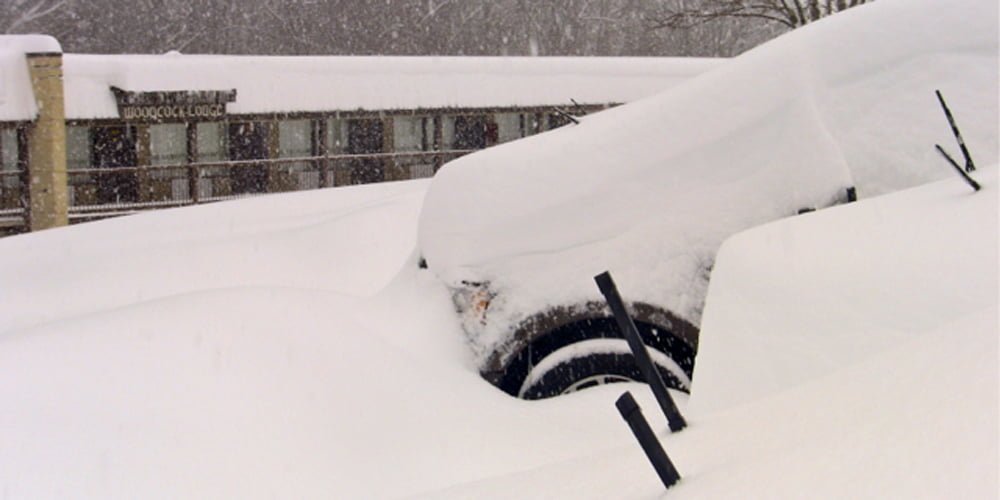 Remember the old Woodcock Lodge? Still there, but not for long! The days of “motel accommodations” at Canaan are a memory. Photo by Randy Johnson

Canaan’s new $34 million hotel debuted in 2013 but this major ski improvement is less than widely appreciated. Over breakfast as the blizzard blew,  General Manager Steve Drumheller told me, “You know the saying, ‘If we build it, they will come.’ Well,” he said, “they didn’t.” Of course that’s not literally true—he chuckled as he said it.

But Drumheller does wonder why it’s taken a while for word to get out, especially since “this hotel is an incredible facility compared to what we used to have. I still talk to people who aren’t that far away who don’t know about our great new lodging and dining.”

That smarts at Canaan after “a bullish last spring and summer when occupancy was up.” Canaan is indeed a “fortunate” ski area, says Drumheller, because “summer is our busiest season.” Nevertheless, winter 2016 didn’t get started till January. Thankfully, between last Thursday and Saturday, Canaan’s slopes went from 25% open to 100%. 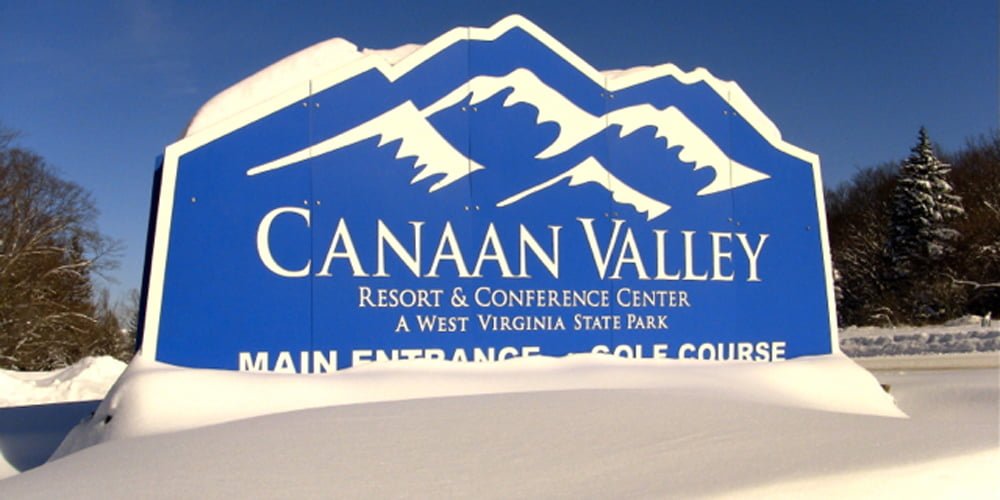 After a slow start to winter, Canaan Valley is on track to make its new hotel a destination for real snow enthusiasts. Photo by Randy Johnson

That brought in the crowds, a perfect audience for Canaan’s new hotel. From the parking lots, the heavily remodeled core of the original main lodge sports a bright modern main lobby topped by a soaring, airy atrium. Ski lockers are a step away from the front entrance, as are an expanded Seasons Cafe and gift shop. “Our biggest complaint was always the quality of the guest rooms,” Drumheller admits, a gripe not likely to be heard now. Fast elevators access two flanking wings with 160 rooms. There’s a luxe feel to the place.

Tastefully decorated hallways lead to spacious rooms with richly patterned carpet, boldly graphic artwork, 37-inch big screen televisions and amenities that include a niche with a mini-fridge, in-room coffee, and microwave for food prep. Fireplace rooms are available. There’s a computer desk, free wifi, a sofa and coffee table seating area. Some rooms have sliding glass doors or balconies, half of which look out over knock-your-socks-off views of the entire valley. Bathrooms have marble countertops and hair driers. 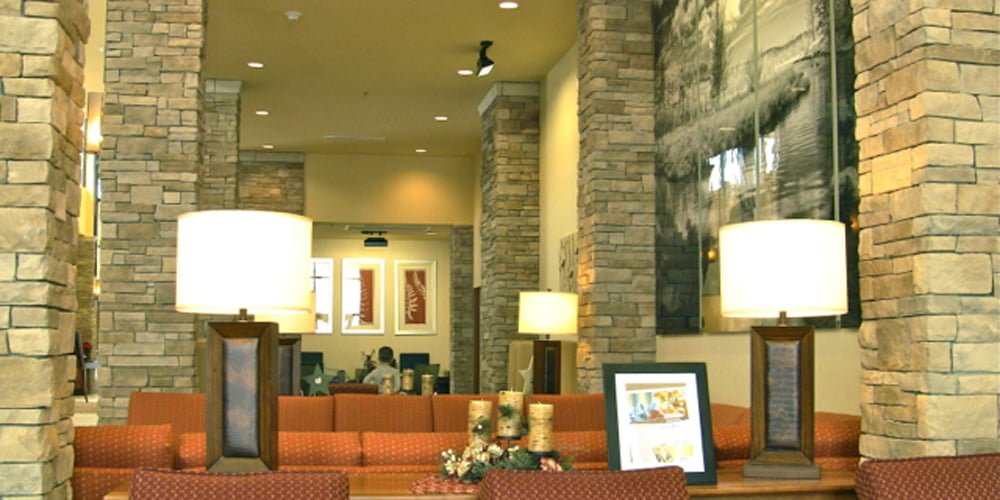 The Canaan Lodge lobby is the equal of the most modern ski area accommodations found at the South’s best slopes. In the background, a guest checks e-mail at the lobby business center. Photo by Randy Johnson

The original lodge that links the wings has also been renovated, where the view-packed Hickory Dining Room and adjacent Laurel Lounge are located. Not far away, snow-covered cabins sit beside cross country ski trails.

The resort’s remodeled meeting rooms and new facilities, including a private dining room and an outdoor covered pavilion (the ice rink in winter), can accommodate meetings of 900 people, improvements that are winning back clients who’d gone elsewhere, Drumheller says. He should know—he was the resort’s director of sales and marketing from 1982 to 1989. 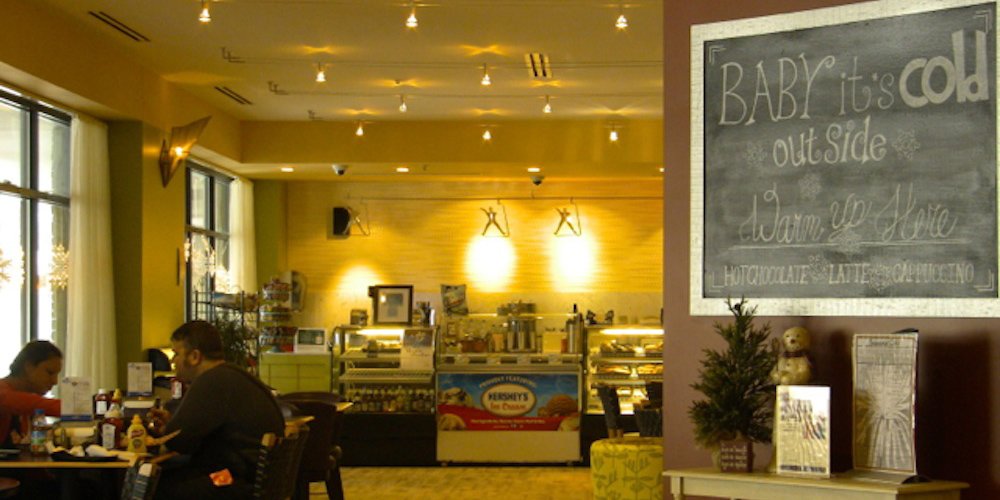 Seasons Cafe is one of a number of eateries available to guests at Canaan’s Lodge. Photo by Randy Johnson

Drumheller is a fixture of the West Virginia ski industry with stints at Silver Creek, Snowshoe, and Timberline. He has returned to his Canaan roots ready to oversee a renaissance. The remaining hulks of Canaan’s old motel units will be gone this spring—too far below code to renovate. But the new green space they leave behind will further bolster the GM’s eye on the future, which includes the resort’s wedding business.

All that makes Canaan Valley a success story in a resort state park system intended to bring tourism to rural areas. The word is getting out about the new hotel, indeed, it’s still kind of a best-kept-secret, but  Corridor H will also help. The long-touted high-speed highway link from West Virginia to the DC area is finally nearing completion, and very close to nearby Davis. That means Drumheller’s new hotel won’t be the only thing that’s easier to reach in this skiers’ Land of Canaan.