Can Sugar and Cataloochee Get Open on Saturday? Sunday? 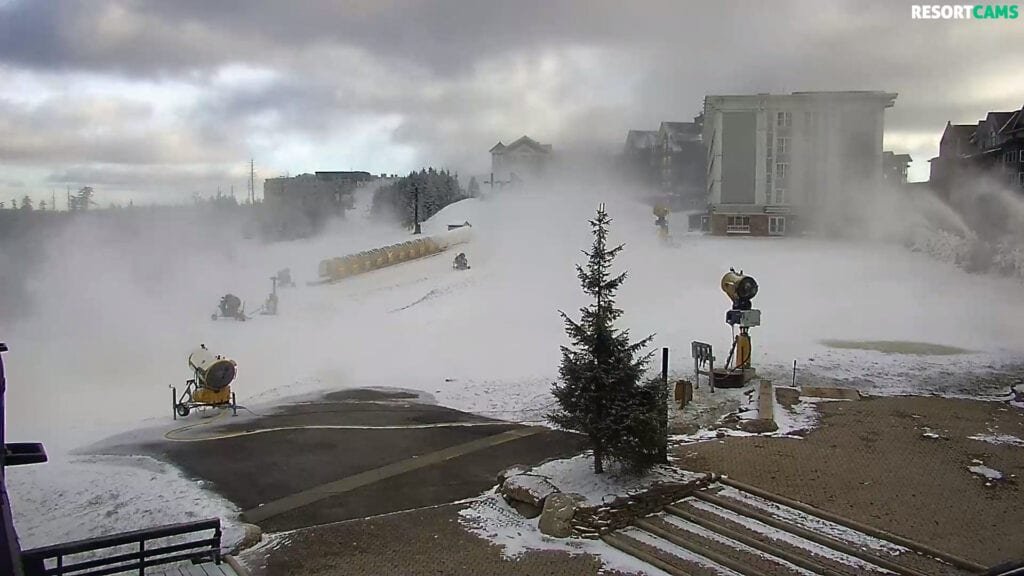 (Photo is from Snowshoe Mountain at 3:42pm today)

Man it was awesome to see Cataloochee Ski Area open up this past Sunday. Sugar Mountain and Cat began making snow the previous Thursday, October 31st – as did Snowshoe and Beech Mountain. However, marginal temperatures made it a close call as to whether either of the North Carolina ski areas would make enough to open.

Cataloochee did for that one planned day of ski and snowboarding ops.

It was even more awesome to see SIX ski resorts making snow this morning. Those were Canaan Valley and Snowshoe Mountain in West Virginia, and then Beech, Appalachian, Cataloochee and Sugar in North Carolina.

After having a look at the temperature forecast for today and tonight, the talk around the office was that we’d PROBABLY see Sugar Mountain and Cataloochee Ski Area opening tomorrow – Saturday, November 9th.

The temperatures are meant to nosedive tonight which will have all of the snowguns cranking at all six of the aforementioned ski resorts, however, the thinking here is that it will be a real stretch for either Cat or Sugar to get open for Saturday morning. Maybe Sunday?

Right NOW, that is going to another close call. Temperatures at both ski areas will dip plenty cold enough tonight to make snow, but each has a lot of bare ground to cover – so (again) we think a Saturday opening will be tough. Probably not happening. Saturday night’s temps are expected to drop back into the mid-to-upper 20s, after a mid-to-upper 40s kind of day. So can they make enough snow to open Sunday?

So we may just be waiting on the r-e-a-l-l-y cold blast that is coming in next week. So a Wednesday opening day is more likely. Next Wednesday through Friday could be really nice days to hit the slopes and meteorologist, Brad Panovich says that the next 10-14 days, right up through Thanksgiving looks like lots of cold. That bodes well for skiers and snowboarders to get in some early, early turns. It also bodes well for other ski areas planning to open up around November 22nd, 23rd, etc.

Stay tuned and we’ll give the latest as we hear it. Who knows, one or more resorts could surprise us tomorrow or Sunday. We’ll see.