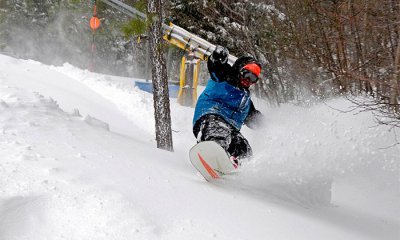 What an unbelievable past week or so we've had. Who would have thought that the best snow conditions of the season would happen in March? In general, things have continued to get better and better since the middle of January. A few of my morning articles over the last month have talked about how it could be peak seasons right now blah blah blah. I couldn't have been more wrong. Right now is peak season conditions!

Yesterday was crazy to watch the snow totals quickly add up in West Virginia and especially in Virginia. The resorts in VA are the big winners with this storm which doesn't happen all too often. I'm pretty stoked for them as they've gotten the shaft on most of the snow storms this year. You can check out all of the snow totals on the SNOW REPORT PAGE, but I'll go ahead and tell you that Massanutten, Bryce, Wintergreen, and The Homestead all got dumped on. Massanutten and Wintergreen both saw two feet yesterday. Think about that for just a second. It didn't start snowing until about 10pm-ish on Tuesday night. It stopped snowing sometime yesterday evening. In the span of about 24 hours they saw 24” of snow. That's 1” of snow per hour for an entire day, which is pretty absurd. Check out the video below from Wintergreen yesterday and you'll see the results of that snowfall.

That's messageboard member brookbarrel who made it up to Wintergreen yesterday. That guy always finds the pow. He was riding decent pow at Snowshoe all weekend and went right to Wintergreen yesterday. According to him, the sides were pretty much bottomless. Him and a couple of my buddies are up there today and I couldn't be more jealous, especially since the sun is supposed to come out in the afternoon up there. Sunshine and thigh deep pow…it doesn't get much better than that.

The West Virginia resorts are showing some pretty impressive totals from the storm as well. Timberline and Canaan were somewhere in the 18” range. I'm looking at data.canaanmtnsnow.com right now and there is currently 29 inches of snow on the ground up there. Geez! What amazes me is that Canaan still only says they have a base depth of 12-24”. They're being too modest!

Snowshoe “only” saw a foot from the storm. That mountain is in such good shape right now, no wonder they have pushed back their closing date to March 31st. Check out the latest video from Ed Schneider on the VIDEOS PAGE.   It's the second video.  Gah I want to go back!

Finishing out that part of the region, Wisp saw 10 inches and Winterplace is reporting 5 inches from the storm. Both resorts are still in tip top shape and 100% open.

Down here in North Carolina and Tennessee, snow amounts were generally less. Beech is the winner here with 8”. They were closed last night for safety reasons which means there will be a ton of untouched pow out there today.  Check out this beautiful photo from up there yesterday.

It's really hard to be in the office today knowing there is so much pow to be had across the region. Luckily, I have gotten my fair share of riding in lately. Five out of the past six days I've been able to ride some excellent snow conditions. What's even better is all of those days have been spent in the trees! I love tree riding and exploring new stuff. Brookbarrel showed me some fun stuff at Snowshoe this weekend, I spent Monday night riding in the woods at Beech, and then last night I was even able to go exploring at Sugar. I'm pretty stoked on that one actually. It's not too often that there's enough snow at Sugar to ride underneath the lift at the very top of the mountain. There was last night though and that line was hit several times by myself, jamsandwich, and GrizzlyEnton. If you're out there today, those are our tracks you see. Tree riding in the Southeast is such a treat!

If you can't hit the pow this week, no worries! This weekend is shaping up to be rather superb. It won't be pow by then, but it's going to be bluebird, hoody conditions! A little warmup is in store for us and with all of this fresh snow, it should be pretty sweet out there. I'm headed to Beech either Saturday or Sunday and I'm looking forward to some corduroy, a little park action, and not having to bundle up and wear multiple layers. I guess you could say a little spring riding is in order this weekend. It is March after all.

That's it for today. I'm hoping this article isn't too spaztic. I'm kind of all over the place this morning looking at snow totals, videos, pics, etc. I'm just really stoked on conditions right now!

Previous Post
Shredding Two Feet of Fresh Snow at Massanutten
Next Post
This is the Awesome Season that Never Ends, It Just Goes On and On, My Snow Loving Friend!