It’s Brisk to Say the Least, But the Best Weekend in Two Years is Here 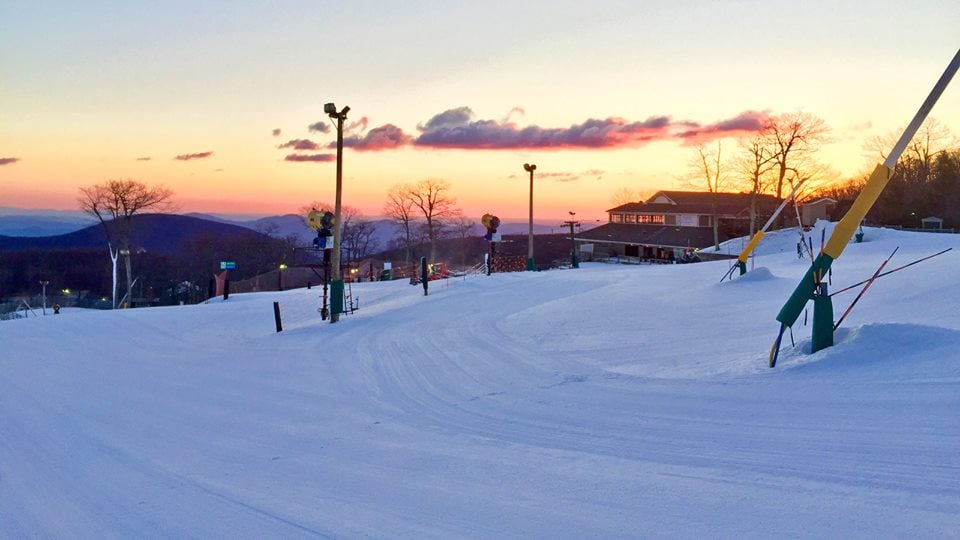 We’re experiencing yet another brutally cold morning at the ski areas.  It’s been pretty astounding this week to do this report every morning and see nothing but single digit and negative temperature readings.  Even though it’s going to be cold, this weekend is going to feature the best ski and snowboard conditions that we’ve had in at least two years.  Oh yeah!

I’ll try not to talk too much about the cold as I’ve done that a bunch this week and I’m feeling a bit repetitive.  The ski areas are deep in the icebox this morning and if you do go out on the slopes just make sure to bundle up and be smart about things.  Go in if you get cold.  Wind chills today are forecasted to be in the negatives for every ski area in the region.  No matter where you go, layer up! 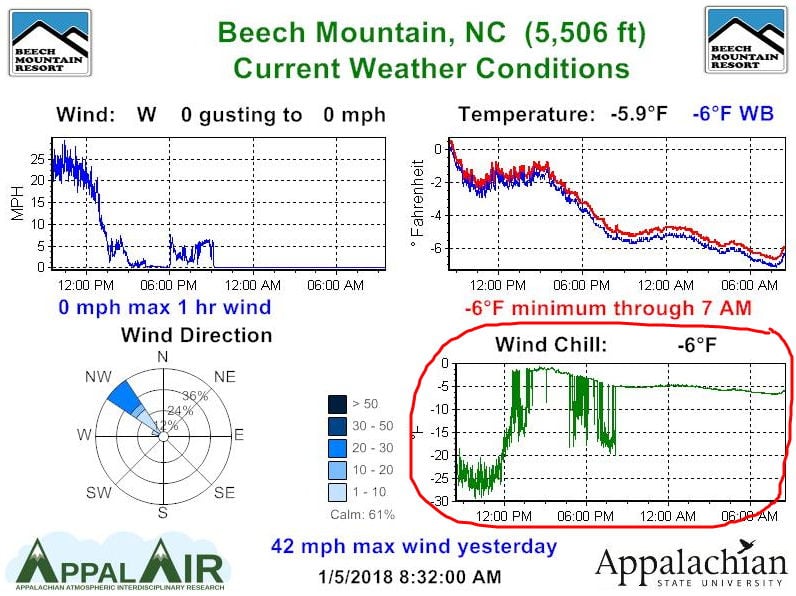 Wind chills were brutal yesterday at Beech. More power to you if you were out skiing or riding.

Mike has been getting emails about the cold and snow and people have been asking if we’ve set any records.  We definitely haven’t set any snowfall records as it’s been relatively dry this year in terms of the white stuff.  Real dry actually.  However, some temperature records are definitely being set.  Brad Panovich noted that this is the coldest start to a year on record for Boone, which is nearby to App, Sugar, and Beech.

The average temperature in #Boone from Dec 31st – Jan 4th has been the coldest such stretch on record with an average of just 16°. #wnwx pic.twitter.com/VWxyP9I0zj

I was looking at some stats for Snowshoe and the records for the station up there only go back to 1975, but it’s still pretty incredible to see that this is the longest stretch of days with a high temperature less than or equal to 20 degrees.  It’s been eleven days since they hit that mark! 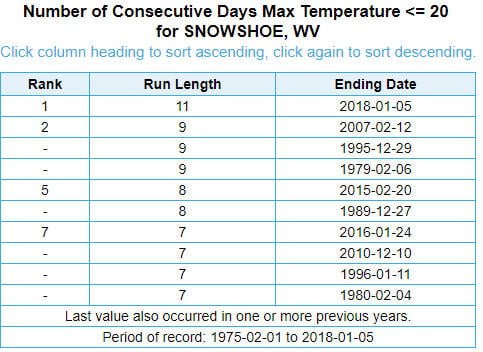 It looks like they’ll break that streak finally on Sunday. 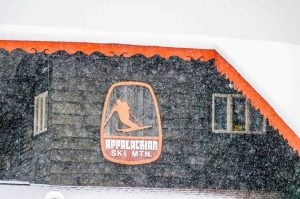 It’s cold blah blah blah.  Let’s talk about some snow though.  We don’t have any huge numbers but a number of resorts have seen several inches of natural snow in the past 24 hours.  Here are the numbers…

Again, not a ton of snow but add that to the snowmaking over the past month and we have some incredible conditions right now.  For the most part, the snow is over for the time being.  Another couple of inches are possible for West Virginia though.  It looks like the forecast yesterday for those resorts was a little ambitious.  However, I said two days ago that I wouldn’t be surprised to see a 6 inch number from up there and that is still feasible.

A Great Weekend Ahead

I mentioned at the beginning of this post that this is lining up to be the best weekend we’ve had in at least a couple of years.  Last season was pretty much wrecked by two warm spells in January and February.  The conditions right now are far superior to anything we saw last season.  I did the math the other day on what slopes were open and you can go back and read that again if you want.  I’m not going to go through it all again but we’ve had several more trails added since then so the numbers are even better now.  This cold snap is expected to break next week and there is inevitably a January thaw in our future, so I would suggest getting out this weekend and making some turns if you can.  You never know what Mother Nature has in store for us!

Just a couple things worth mentioning this morning…

It’s been an eventful, albeit frigid, week.  Next week looks milder, and possibly wetter, but we’ll worry about then when the time comes.  Just enjoy the weekend and make sure to get out on the snow if you can!