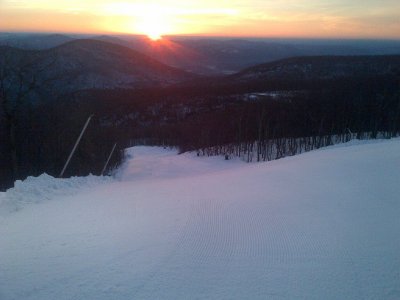 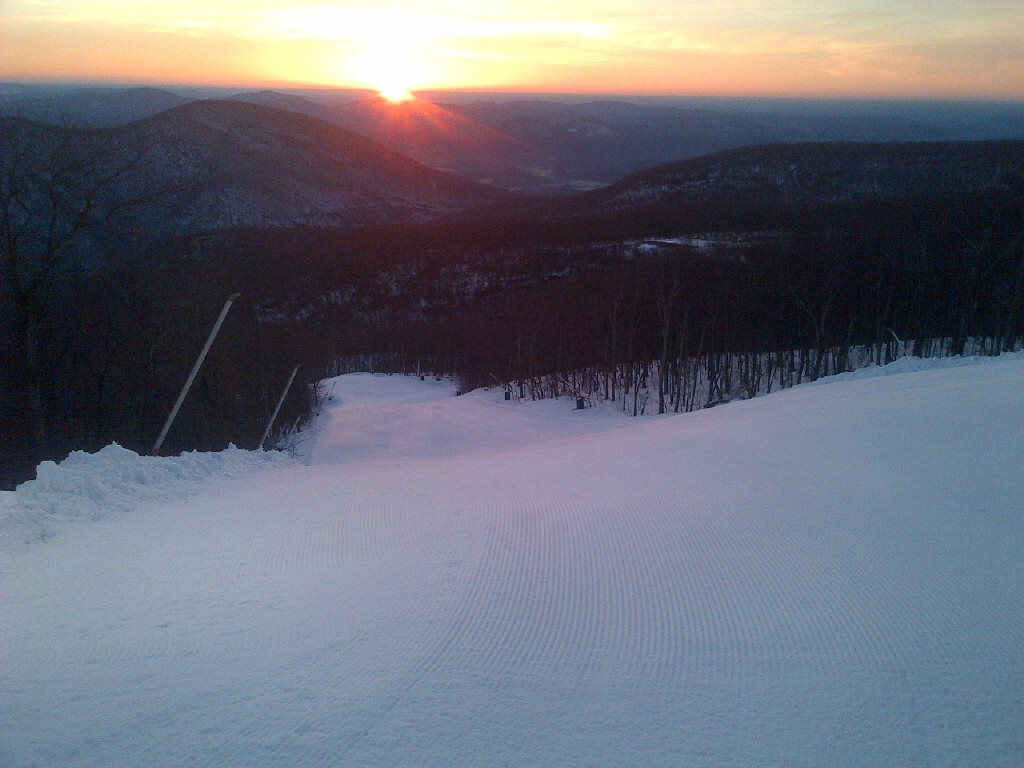 We're starting the week off with 11 open resorts — not 10, like I had previously conjectured. Massanutten just couldn't go through with Sunday being their last day for the season, especially with having four inches of new snow to play on! So, today is their BONUS (and final) day! The same is true for Wintergreen (shown right) – on account of more snow, they're giving guests one last weekday to spend on the slopes. They'll close after the day's session, then reopen for one last weekend (23rd & 24th). Likewise, the Homestead is hoping to reopen this coming weekend and then again Easter weekend, weather permitting. The conditions are just too nice right now to walk away from!

In addition to Mass' four inches of recent snowfall, Timberline also saw four, Snowshoe six, and Wintergreen one. In the words of Snowshoe, "An awesome winter just keeps getting better. Six inches of fresh snow this morning bringing the March total to almost three feet!"

Starting today, Cataloochee will be offering “One Run, We’ll Refund” now until the end of the season.  Guests unhappy with conditions will receive a full refund after one run. Refunds will not be given after that.  Also, for folks who have season passes to other areas (even if the area is closed already), you can get $10 off a Cataloochee lift ticket anytime.

This past weekend, Timberline hosted their Snowy Luau 2013. Here's a comment reflecting on the festivities that was shared on their Facebook page:

The large crowd of Luau fireworks spectators showed up but not early enough to allow their anxious anticipation be known. Whether or not the gathering winds would drive away the fog on top of the mountain was up to mother nature. Hey, after all, she was good to us all season long. Even though it started to happen, what we saw was about 20 minutes of flashes of "Aloha Borealis" followed by a red aura that seemingly begun descending from the clouds to the background of the Hoaloha Hokuolino drummers. Every Snowy Luau it seems somehow always manages to bring with it a unique twist and turn and thus should never be missed!

There are plenty of photo albums by WVHighlands Artisans Gallery you can check out on their site. Here's a sneak peek >>

For a few more, click on the links below:

Our friend Kathy Doyle shared this statement with us at the conclusion of Ober's season: 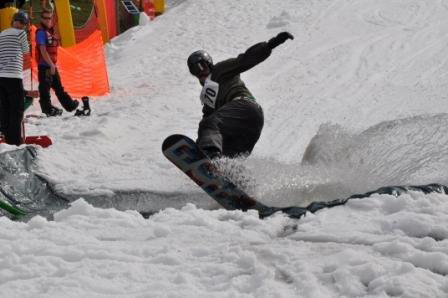 The slopes at Ober Gatlinburg are now closed for the 2012/13 Season and we ended it with a bang! We had over 70 in our Spring Fling event (the first since 2010) participating in Giant Slalom, competition jumps and everyone’s favorite – pond skimming! Just above is an image of Luca F. smoothly clearing the pond.  A new event this year was a competition between Ski Patrol and  Gatlinburg Snowsports Center (aka Ski School) for the title of King of the Hill.  Ski Patrol won the title by a small percentage with their performance at the  “highest carve” and “highest number of spins/turns” events.

Although the slopes are now closed (and big thanks go out to all that supported us this season), snow tubing is still going strong thanks to Snow Magic! Snow Tubing will remain open through Easter Sunday and beyond depending on interest.  Additionally, the Aerial Tram, Indoor Ice Rink, Wildlife Encounter (with our rambunctious yearling bears),  Scenic Chairlift, Alpine Slide, Carousel and Chair Swing will operate daily (weather permitting).

Hoping and betting we'll see similar positive recaps of other resorts' seasons soon. Until then, enjoy what's left. App has seven more days, Beech six, Bryce five, Winterplace seven plus, and Wisp and Sugar are still out for the call.