Goodness, we have an absolutely gorgeous day on tap areawide with some of the best conditions we have seen this year as snowmakers have been working around the clock to get the slopes looking incredible AND potentially open more terrain as the week goes.

It is just an incredible turnaround from where we were at this point last week.

The big story this morning is the temperatures as it is frigid once again, but not quite as cold as it was yesterday. Today will be a little warmer as we could see snowmaking turn off for a break later today, but the mountain ops will be able to crank it back up this evening.

That should be the same pattern on Thursday before our next system moves through. Brad provided his latest skier’s forecast last night and things for this weekend are looking FANTASTIC once we move past Friday – especially in northern locations.

We will certainly take that forecast.

As a result of around the clock snowmaking, Cataloochee announced this morning that they are 100% open on the mountain as they are offering all 18 trails. Snowshoe and Winterplace also teased that they would have additional offerings later this week so we will certainly keep an eye on that.

It wouldn’t be a surprise to see several resorts up their offerings in the next couple of days.

As always, you can visit the Snow Reports for the full details, but below is a quick snapshot for today.

North Carolina
Appalachian Ski Mountain (27°) – They are playing on eight slopes with five lifts this morning in Blowing Rock. They have a 42-60” base with a packed powder surface. Both Appal Jack and Appal Jam are open today after being closed for focused snowmaking yesterday. 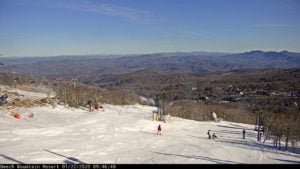 They have nine slopes open with six lifts operating. Snowmaking will continue as long as temperatures allow today. There is a trace of new snowfall this morning from yesterday’s snow.

Cataloochee (13°) – As I mentioned above, Cataloochee is running 100% with 18 trails and five lifts operating. They have a 46-74” base with a groomed surface. CoCoRaHS is reporting that they received just under an inch of new natural snow.

Ski Sapphire (16°) – This morning, the groomer was hard at work moving around a lot of snow that the mountain op crew had made overnight. Both slopes and tubing are open for play today. They have a 24-54” base with machine-made surface.

Sugar Mountain (31°) – Sugar has been a manmade blizzard at times this week as they have upped the base to 43-82” with a manmade powder and frozen granular surface. They are riding on 11 slopes – including Tom Terrific and Gunther’s Way – which is serviced by four lifts.

Wolf Ridge (23°) – The Wolf doubled the open slopes this morning after focused snowmaking yesterday. They have a 16-30” base with four slopes and two lifts in operation. The groomers have been out setting the stage for some great conditions in Wolf Laurel.

West Virginia
Canaan Valley (9°) – It is a chilly morning in Davis, and the mountain op guys are laying down the snow. Canaan has a 15-30” base with 11 slopes and two lifts in operation. They received a trace of new snow yesterday.

Snowshoe (28°) – It is going to be a beautiful day at 4848’ as they are playing on 43 slopes with 12 lifts in operation – with 165 acres open. They have 45” base with groomed packed powder conditions. In their report this morning, they mentioned that they open to add more terrain to the mix this weekend. 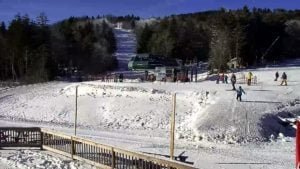 Speaking of Snowshoe, Mike is putting the final details together for the Ski Southeast Summit at Snowshoe. We will release those as soon as possible. However, the dates are slated to be Feb. 28, Feb. 29 and March 1. It is going to be a great time!

Winterplace (11°) – Winterplace is featuring a groomed, packed powder surface with a 28-44” base. They are playing on 13 slopes that are serviced by five lifts. They will be opening three additional trails and Lift 3 later today as they are still working on focused snowmaking.

Virginia
Bryce Resort (27°) – Bryce has taken full advantage of the cold snap as they have upped their base to 30” across the mountain. They have seven slopes open – which are serviced by one lift. Ice skating and tubing are also open.

Massanutten (16°) – Massanutten is adding a trail – Paradice – to the mix this morning to bring their total to nine trails and six lifts in operation. They are rocking a 34” base with a groomed surface. They did feature this great advice in their report this morning: “If you are calling in sick today make sure you apply lots of sunscreen!”

Omni Homestead (18°) – Homestead is set to resume operations tomorrow (Thursday, Jan. 23). They have been blasting the snow on the slopes so conditions will be incredible once the lift starts turning tomorrow.

Wintergreen (22°) – A beautiful morning at Wintergreen as they are playing on a 28” base with a groomed service. They are offering 11 slopes to ski and ride on and those are served by three lifts. They have started making snow off the Highlands lift so keep an eye out for when they open that additional terrain.

Tennessee
Ober Gatlinburg (20°) – Ober is taking full advantage of the cold snap, and things are looking really, really good atop Gatlinburg. They are playing on six slopes with two lifts open. They have a 20-40” base with a groomed surface. 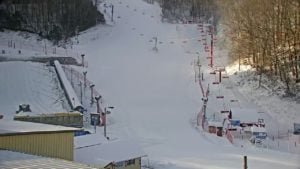 It is a heck of a job by Ober and the staff to get things in great shape– especially when you consider where they were at on Thursday of last week.

Maryland
Wisp (14°) – The Snow Whales have returned to McHenry as they have been laying down some great snow around the clock. They are playing on 17 slopes with seven lifts in operation. They have a groomed surface with a solid 24” base.

Look for additional trails to open up in the coming days here as well.

As I mentioned at the top, it is going to be a bluebird day areawide so if you can get out on the slopes, be sure to take advantage of it.

That will do it for today but until next time #ThinkSnow!