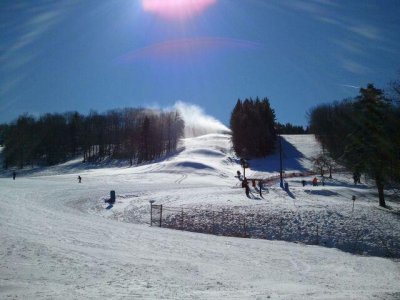 Every ski area this morning is seeing temps that are at or below freezing, with the exception of Ober Gatlinburg over in Tennessee (those guys can’t catch a break this year). However, not everyone made snow last night. The places that didn’t (Wolf Ridge, App, Massanutten, Bryce) saw marginal temps overnight that hovered only a few degrees below freezing. Those temps didn’t even dip below freezing until after midnight and the dew point was fairly high as well. All of that adds up to a night that really wasn’t conducive for snowmaking at those areas. You can’t blame those guys for not getting the guns going. 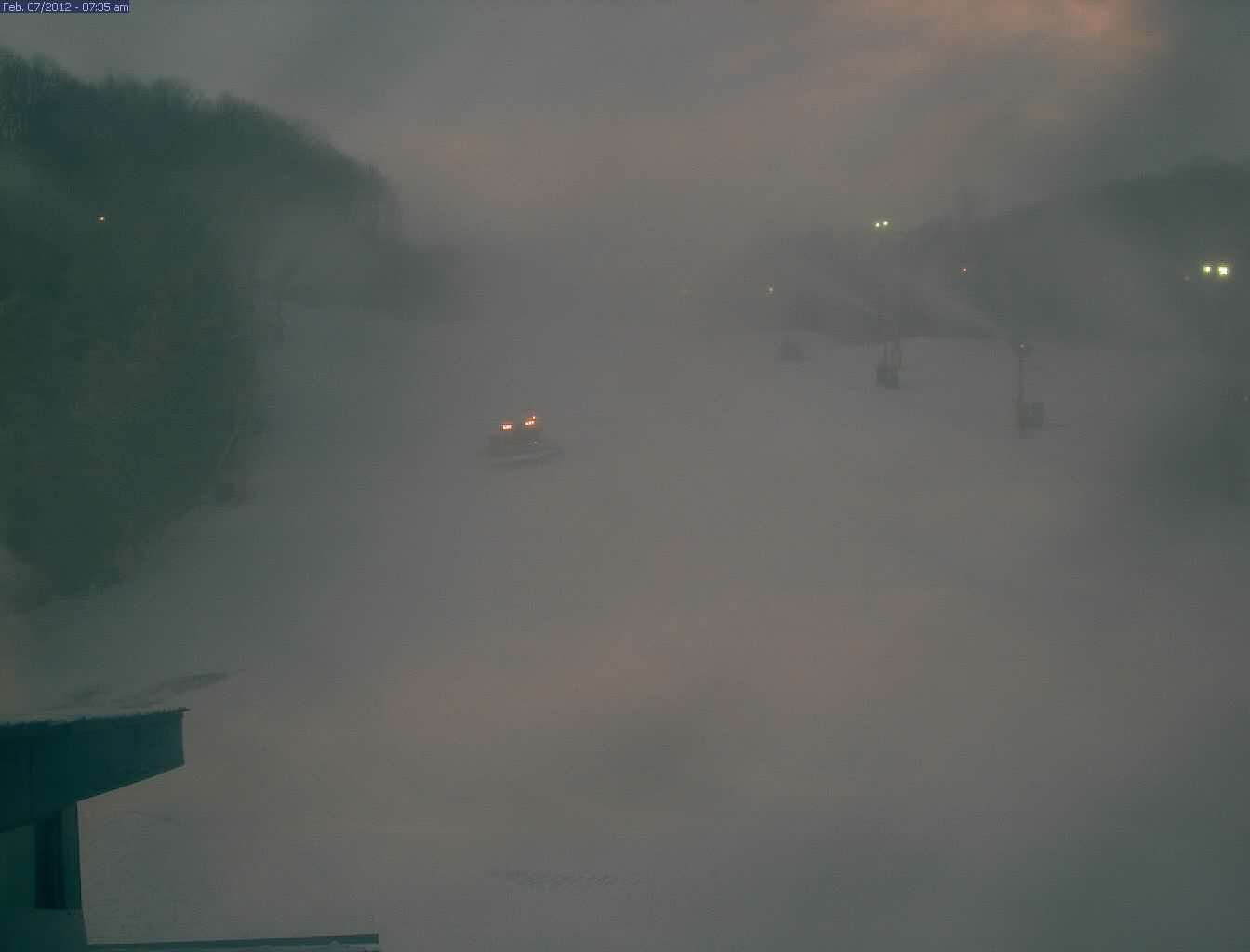 <<< Cataloochee is just one of the many ski areas that were able to make snow overnight.  I wonder how well the guy driving that Cat can actually see with all of that snowmaking going on?

Today should be pretty fun as we’ll see a good amount of sunshine once again. I’m pretty stoked to go ride at Beech after work. It should be pretty good today and tonight since they made snow the past two nights. I’m trying to get my co-worker to go up there with me so we can enter the cornhole

tournament. I won’t lie, I’m pretty good at cornhole and I want to win tonight! It should be a fun night up there as they are having live music too I think. College Week continues at Beech through the weekend so there should be fun stuff going on all week.

<<< College Week continues at Beech through the weekend.

The weather for the rest of the week looks…awesome! We’re finally seeing a 7 day forecast with no rain in it and snowmaking temps as well. In fact, tomorrow we’ll see some natural snow across the region as a quick moving system passes through. It doesn’t look like anything major, but it’s snow nonetheless. Check out the NWS forecasts for Snowshoe and Beech Mountain.

Tonight: Increasing clouds, with a low around 29. Northwest wind around 5 mph becoming calm.

Wednesday: A chance of snow showers, mainly after 11am. Patchy fog before 7am. Otherwise, mostly cloudy, with a high near 32. West wind 5 to 8 mph increasing to between 14 and 17 mph. Winds could gust as high as 30 mph. Chance of precipitation is 30%. New snow accumulation of less than a half inch possible.

Wednesday Night: A chance of snow showers, mainly before 9pm. Mostly cloudy, with a low around 23. Northwest wind between 13 and 16 mph, with gusts as high as 28 mph. Chance of precipitation is 30%.

Thursday: A slight chance of snow showers before 11am. Mostly sunny, with a high near 34. Northwest wind between 5 and 10 mph. Chance of precipitation is 20%.

Thursday Night: Partly cloudy, with a low around 25.

Friday: Partly sunny, with a high near 41.

Friday Night: Mostly cloudy and blustery, with a low around 25.

Tonight: Increasing clouds, with a low around 26. Calm wind becoming south between 4 and 7 mph.

Wednesday: Snow likely, mainly between 10am and 4pm. Cloudy, with a high near 29. South wind 5 to 8 mph becoming west. Chance of precipitation is 70%. New snow accumulation of around an inch possible.

Wednesday Night: A chance of snow, mainly before 3am. Cloudy, with a low around 16. Northwest wind around 6 mph. Chance of precipitation is 30%.

Thursday: Mostly sunny, with a high near 26. West wind between 6 and 8 mph.

Thursday Night: Mostly clear, with a low around 20.

Friday: Mostly sunny, with a high near 32.

Friday Night: A chance of snow showers. Mostly cloudy, with a low around 15. Chance of precipitation is 30%.

So yeah, the next several days look pretty good. In particular, Thursday morning should be pretty awesome.  Natural snow mixed in with bluebird days and snowmaking should produce MUCH improved conditions across the region this week. The colder weather continues into the weekend as well. I just didn’t want to list out the whole 7 day forecast on here as that would be a bit too much. It’s looking like this might actually be the best weekend in a month or so. Basically, you should make plans to get some turns in this weekend!

You guys should check out a video that Snowshoe recently posted on YouTube. It’s called “Making Opening” (http://www.youtube.com/watch?v=ZyE8fW9gn_4) and if you have 8 minutes of spare time, it’s a pretty interesting mini-documentary of the 48 hours leading up to the season opening of Snowshoe back in December. It’s pretty cool to see a behind the scenes look at planning and what not that happens on a daily basis. You can check out all of Snowshoe’s videos on their video page by CLICKING HERE. Ed Schneider does a great job of putting out a bunch of videos on a semi-daily basis and it’s cool to be able to see how things are up there at the Shoe. In fact, Winterplace does a really good job too. You can check out all of their videos by CLICKING HERE.  Their "This Week at Winterplace" series is pretty neat to watch as well.

Previous Post
BrookBarrel Posing for the Camera
Next Post
Inaugural “Hope On The Slopes” Event At Canaan Valley Resort March 2-3, 2012