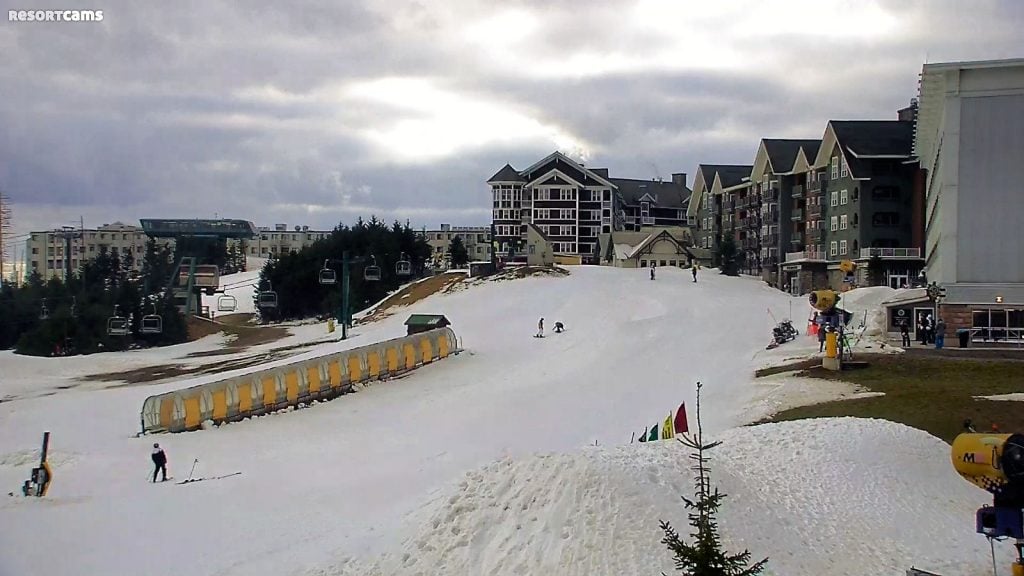 If you ARE in a shopping mood, North Face has a special section on their website for those shopping for ski wear today. Check it out at: https://www.thenorthface.com/shop/black-friday

If you’re in more of a mood to ski or ride than shop – you have more options today.

Before I share the snow report in detail, let me remind you that it is probably 70° in your part of the world. Until only SIX DAYS ago none of our ski resorts had even made any snow other than one burst of snowmaking ops that Snowshoe was able to make a bit earlier in the month.

However, exactly one-half of our ski areas began making snow on Saturday and they were able to really blast the slopes from last Saturday through Monday and into Tuesday before mild temps hit again as expected.

We ARE looking at a return to snowmaking temperatures TONIGHT through Sunday with SOME chances at near, around-the-clock snowmaking at Snowshoe and possibly Cataloochee, Sugar & Beech Mountains on Saturday and Saturday night. We’ve already seen how much snow these guys can lay down in less than 48 hours as we witnessed and shared this past Monday from over at Cataloochee Ski Area.

I preface today’s snow report because frankly I got a lot of emails from people evidently liking what they read from our Thanksgiving Day Mountain Report where I invited people to come up and explore the area for the perfect Christmas tree, do a little shopping and get a little skiing or snowboarding in. So the question of the last 24 hours was:

“Hey, I think we’re going to go up to the mountains this weekend. Where would you go if it were you?”

That’s tough for a lot of reasons, but I like sleeping at night, so I’m honest to a fault – or at least I try to be. Saying that, let me first say that ANY SNOW ON THE SLOPES RIGHT NOW makes for bonus skiing and there are FIVE ski areas open and making that possible today.  If I were you guys, I’d check out the LIVE SKI RESORT WEBCAMS as they tend to tell the story of who looks the best. 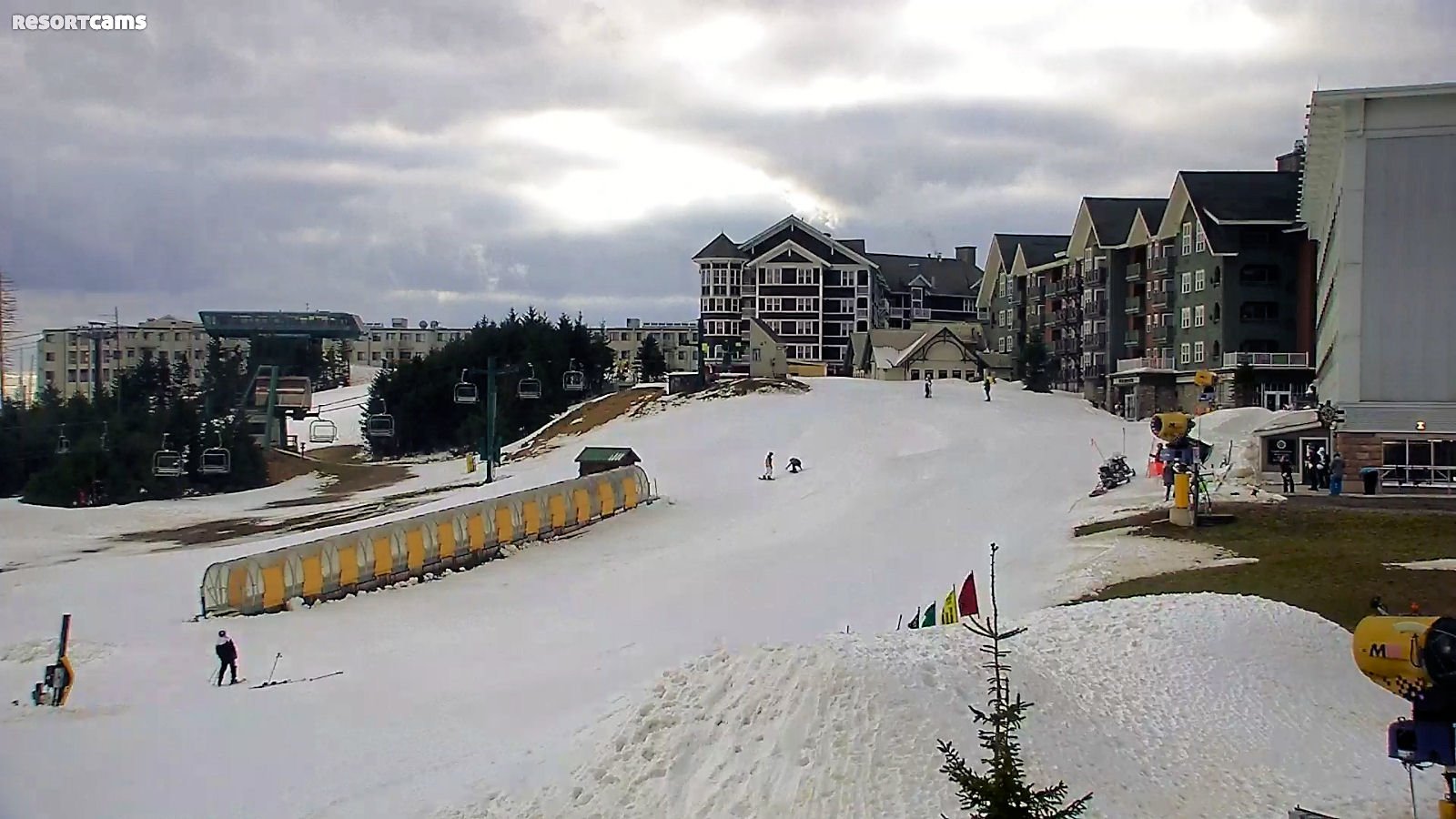 The answer to your question (in my opinion) would depend on where you’d be driving from because in all honesty Snowshoe is certainly in the best shape right now and they offer the most open terrain to play on with 22 acres across the 7 slopes that are open. Also the snow quality is going to be pretty good for what weather we’ve had thus far.

However, since the terrain is pretty limited everywhere right now, I’d say that the answer to that question would be go to the ski area that is NEAREST your drive because all five are providing playable terrain. Cataloochee and Appalachian LOOK the best in North Carolina. I drove past Sugar yesterday and had to wince a bit because as GREAT as things looked on Tuesday of this past week – they were already looking pretty thin in a lot of areas yesterday.

One look at the cameras at Beech this morning will also tell the story that they are obviously not quite ready for “prime time”. That’s to be expected with the weather that we’ve had to work with to date, but another night or two of snowmaking will have Sugar and Beech looking tons better.

So my answer would be, look at your navigation system or Google maps and head to the ski area that is OPEN and NEAREST you as nobody is really any better or worse than the other right now. 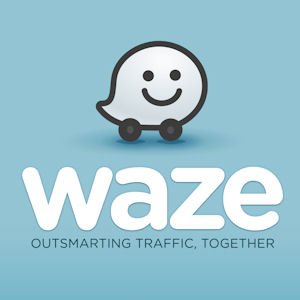 By the way – if you’re planning to do a lot of driving to ski areas this winter, I highly recommend an APP called WAZE. It is awesome in that it not only provides all of the great nav type things you want, but it warns you of any problems along the way – in the form of potholes in the road, accidents and it shows you where law enforcement have been spotted.

The question WAS, however, where would I go TODAY? The answer, (if I’m taking my own advice would probably be Appalachian Ski Mountain. It’s the better looking-closest to me ski area. 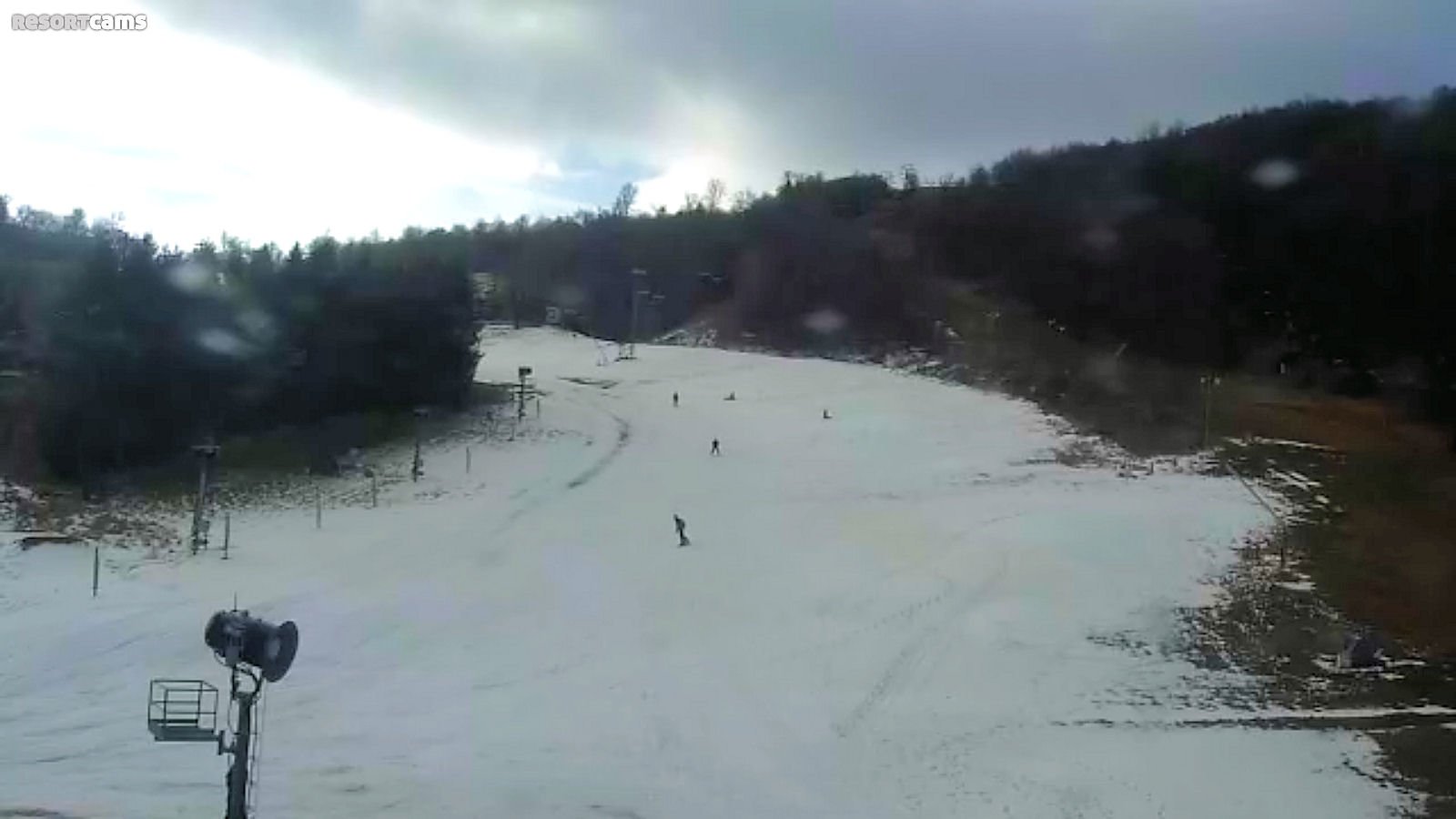 Beech Mountain Resort – 40° – They open today for day sessions only (until 5pm) with 6 slopes and 3 lifts. Ice skating is also open. Beech is reporting a base of 6-20″. Beech is open to the top with Upper and Lower Shawneehaw. 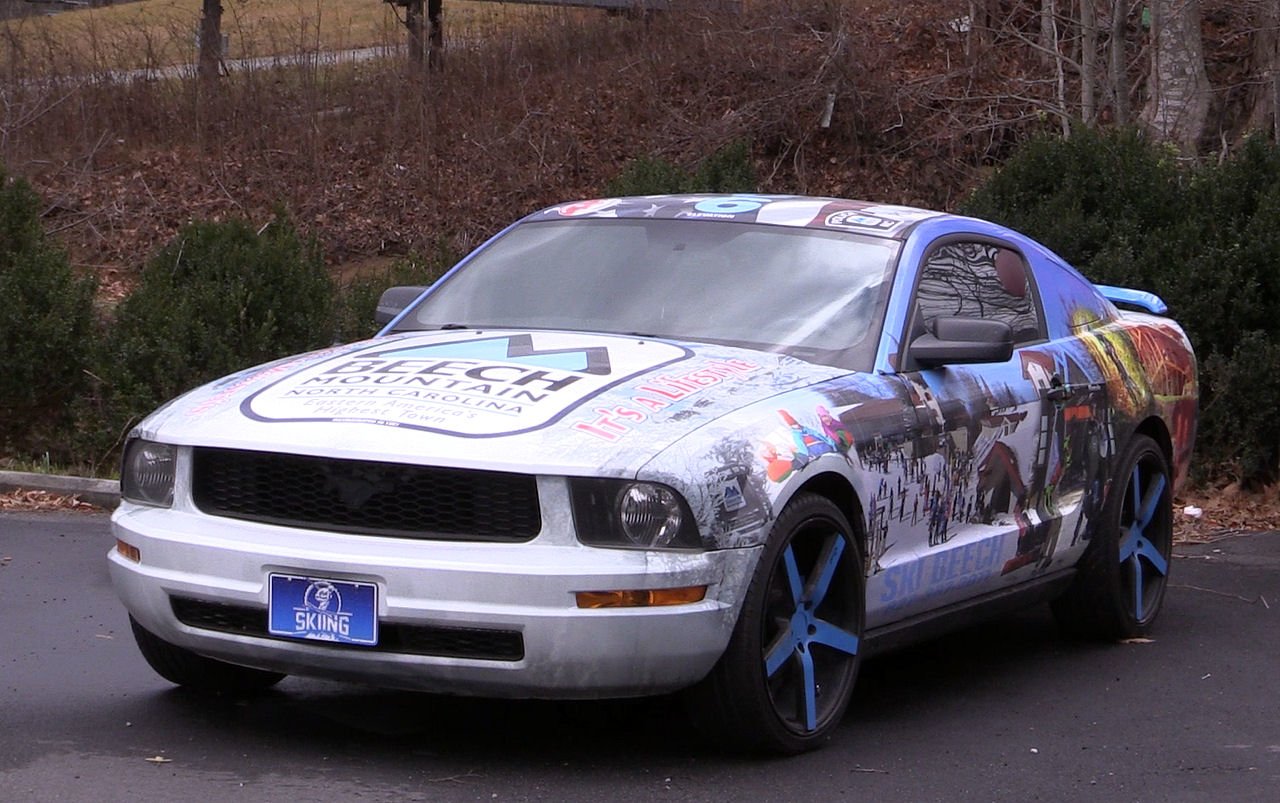 This sweet ride has been parked just off of Hwy 105 near Seven Devils for weeks! Click to Enlarge!

Snowshoe Mountain Resort – 43° – They open today as well with Day Sessions on a base of 40″ and playing on 7 slopes serviced by 3 lifts. Those trails open are Heisler Way, Powder Monkey, Skidder, Upper Whistlepunk, Whiffletree, and Tail Tree. Progression Park is also open (terrain park) and that’s 22 acres of skiable terrain which is the most in the region right now. 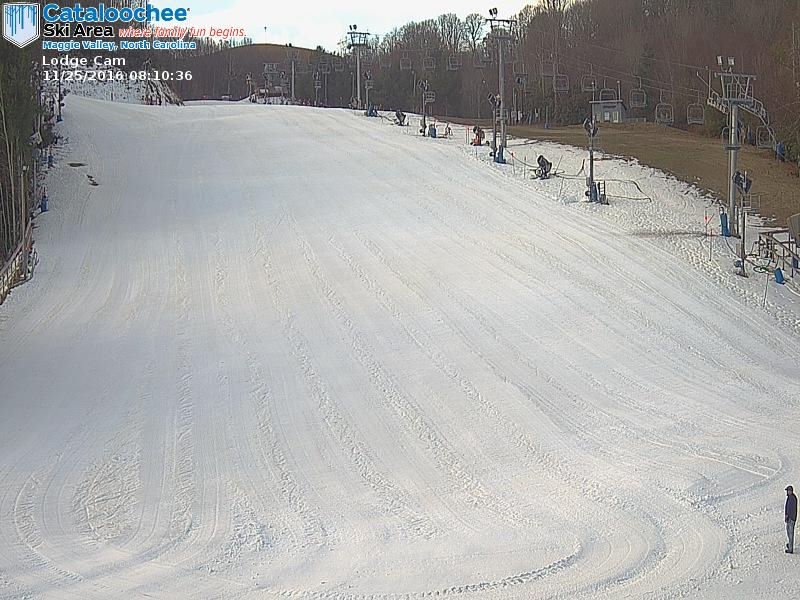 Click to Enlarge this view of Cataloochee Ski Area.

Also, if you have a current season pass to any other area, you can bring your pass to Cataloochee and receive $10 off your day’s lift ticket.  You won’t find that at most ski areas.

Appalachian Ski Mountain – 50° – They are reporting a drop of about 10″ in their base over the last 24 hours but they look good this morning with a base of 8-20″ and 7 slopes open and one terrain park open. Ice Skating is open as well.

Sugar is open with 5 slopes and 2 lifts having dropped one slope in the last 24 hours. They are reporting a base of 6-20″

I would add that ALL of the ski areas would have thin coverage today…especially as the day wears on.

Thanks AGAIN to the firefighters in the region. The Blowing Rock area wildfire (called the Horton fire) is now being reported as 100% contained! Very good news. That fire erupted earlier in the week and quickly grew to over 1000 acres of burned terrain and thanks to the efforts of a lot of hard-working firefighters, that fire is now 100% contained.

We can hope that the same will be true for all of the forest fires in the region – very soon.

That’s it for today. If you’re Jonesing for some skiing or snowboarding – it’s here to be had. If you can wait another day or so…come Saturday and Sunday as things will be much improved.