A Bit of Snowmaking This Morning, Everyone is Waiting for Cold and Snow Beginning Thursday 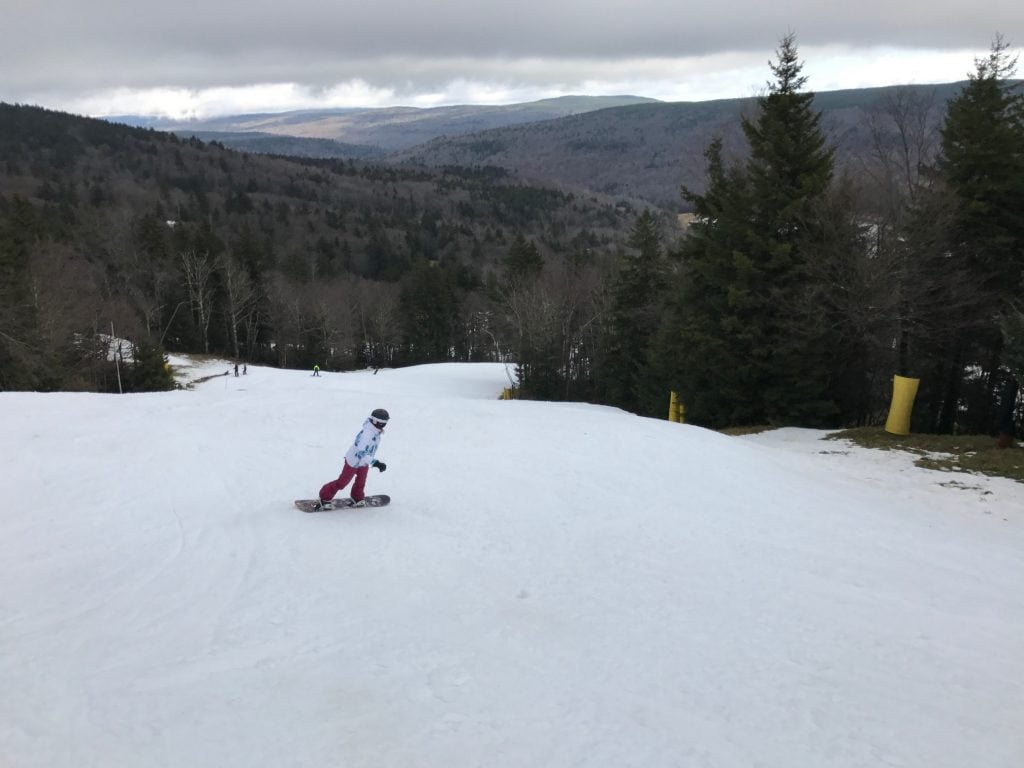 Wow, things look so much better right now than they did at this time 24 hours ago.  Yesterday appears to have been on the foggy side for some resorts in the region and not so bad for others.  Here is a little video that Beech Mountain made and you can really see just how foggy and dreary it was up there!

As you can see, yesterday looks like it wasn’t a day that featured the best of visibility…at least in the southern part of the region.  I checked out the webcams during the afternoon hours and the Summit Cam at Beech indeed showed some socked in conditions.  Here at Snowshoe, it started out pretty crummy and then ended up being rather nice.  I walked to The Depot around 8am and was greeted with fog, cold, rain, and wind.  Oh, so much wind.  Then, around 9:45am the weather did a 180.  The skies cleared, the sun came out, and it couldn’t have ended up being a nicer day.  Temps were in the 40’s and it was sunny as can be.  I ended up going out around 10am, hot lapped Ballhooter for an hour until the crowds came out, and then migrated around the basin side for a bit before grabbing some lunch.  I’m guessing it was the weather, but the crowds weren’t nearly as bad as I was expecting.  Heck, Cupp was completely empty.  It was a little bumpy but I was still able to bomb it and hit 52mph according to the Trace Snow app.  Zoom zoom! 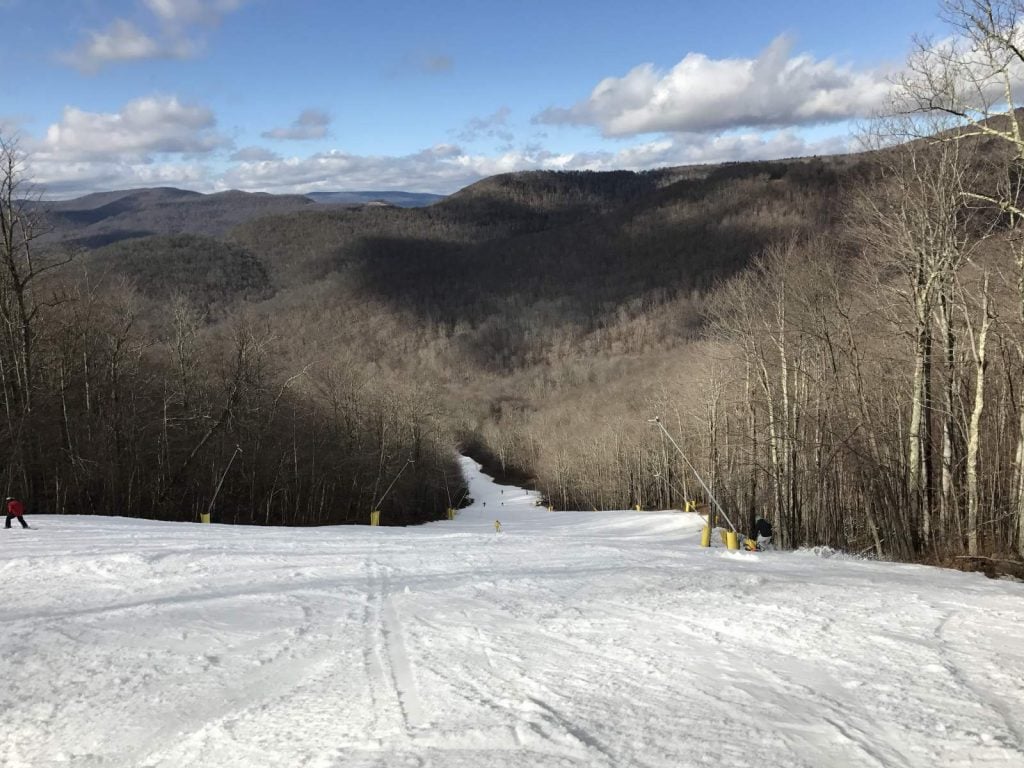 After grabbing some lunch, I went back out for a bit and got several more laps in, mainly on the far side of the Basin towards the Powderridge Lift.  Coverage over there isn’t nearly as good as the areas around Ballhooter, but it’s still better than I was expecting.  One thing I noticed was that many areas over there didn’t have any snow guns in the vicinity, which means the groomers must have been doing a killer job of spreading out the manmade snow.  A popular hashtag on social media this season has been #thankasnowmaker, but maybe we should also start using #thankagroomer as well.  Just a thought. 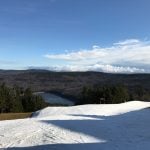 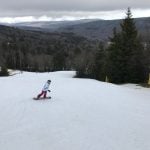 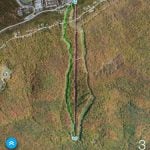 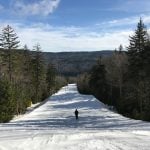 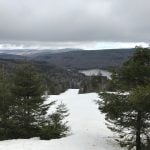 Much Better This Morning

As I mentioned, things are looking much, much better this morning in terms of the weather.  This is evident on the webcams as all resorts look clear and free of fog.  I’m looking out my window right now here in Mountain Lodge and it’s sunny and I can see the snow from the guns blowing over.  There’s even a little manmade dusting on the ground.  I’m pretty pumped to ride and got up super early this morning to make sure I got this report up so I can make the rope drop.

With those colder temperatures we were able to see snowmaking fire up at a handful of resorts.  Well, more than a handful actually.  Eight resorts were making snow this morning.  I would say they are reporting it but a couple of them actually did not mention snowmaking in the snow report.  I luckily saw the guns going on their webcams and marked them accordingly on our snow report.  Here are those 8 resorts who made snow overnight and this morning… 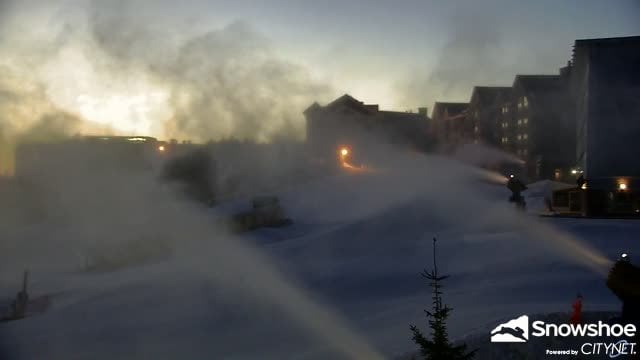 Snowshoe blasting the slopes this morning. 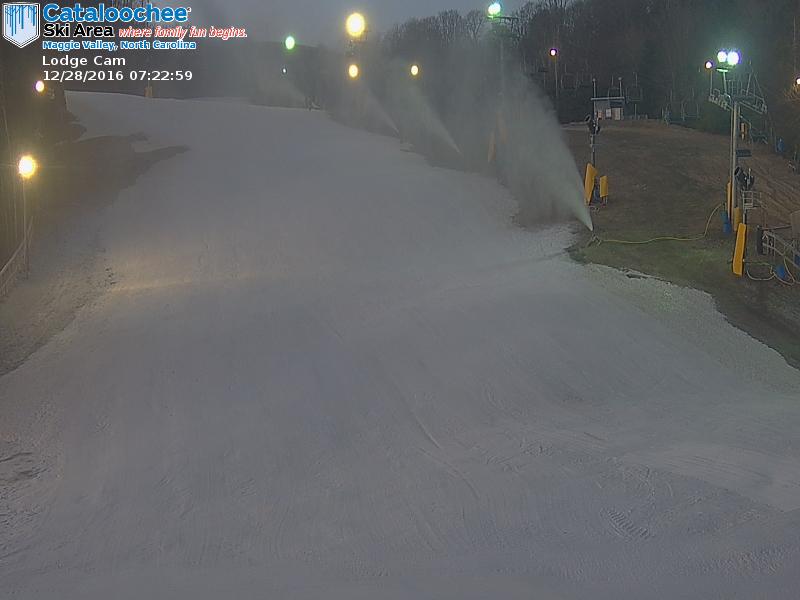 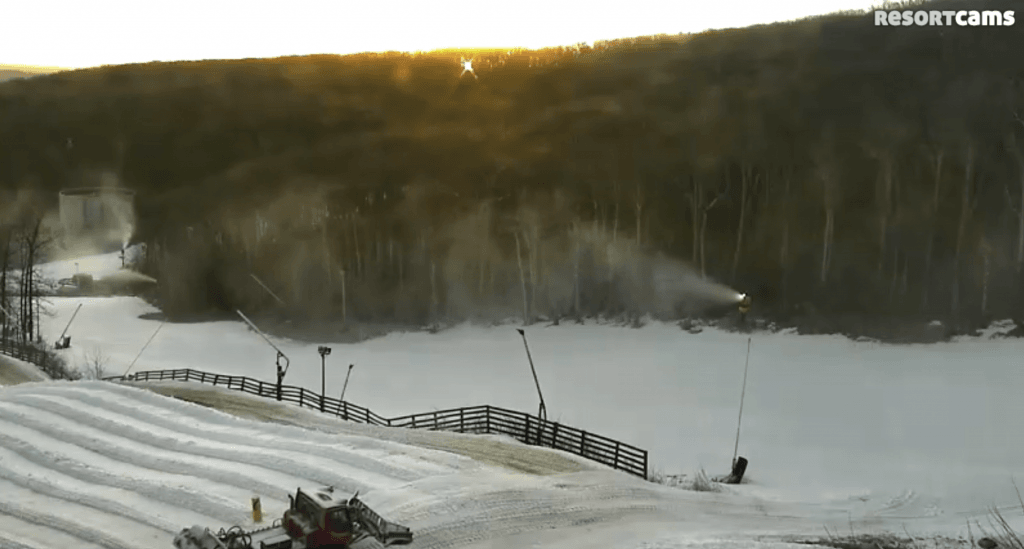 Wintergreen Resort in VA also got in on the snowmaking action.

We’ve had a several mild days over the past week now but it looks like we are about to get another cold shot and even some natural snow beginning Thursday.  Brad Panovich sent in his latest video forecast and you can watch it below.

I mentioned a few days ago about how I was excited that he used the phrase “first bona fide NW flow snow event”.  Well, that excitement continues this morning as he talks about the first “legit” NW flow snow event.  I talked to a couple of people on the lift yesterday who all knew about the snow chances for Thursday night and Friday and they were excited about the potential.  Snowshoe’s marketing director, Shawn Cassell, echoed those sentiments when I ran into him into the village yesterday as well.

In general, I’m seeing forecasts of 1-4″ for the North Carolina resorts.  Sugar Mountain and Beech Mountain generally are the big winners in the state with events like this.  Natural snow has been lacking in North Carolina so far this season, so even a couple of inches would be much welcomed.  This event could supply more natural snow in North Carolina than we’ve seen all season actually, which is sad when you think about it.

The West Virginia ski areas and Wisp Resort in Maryland are generally in the 4-8″ forecast range right now from what I’ve seen.  I’m hoping that this storm overachieves, as NW flow events are known to do, and Friday and Saturday end up being powder days here at Snowshoe.  Mike and I are going to have plenty of pics and videos for you regardless.

As is the case with Northwest Flow events, the Virginia ski areas will probably not see too much of the snow spill over.  That said, it is going to be plenty cold enough for snowmaking Thursday night, all day Friday, and then Friday night.  Combine that with a dusting or so of snow and the weekend should be really good up there.

The weekend is looking good if you plan on making a trip to the mountains.  This recent mild stretch will (briefly) be a distant memory come Friday.  There’s no better way to end the year or ring in the new one than by getting some turns in on the slopes, so make plans now!

Check out the SNOW REPORT page for all the up to date numbers in terms of open trails.  Not much has changed since yesterday.  Base depths at a few resorts lost a few inches, but I’m not seeing any drops in the amount of open trails.  The only substantial change is out of Sapphire Valley, who unfortunately had to temporarily close due to the weather.  Other than that, the numbers are similar to what they have been in recent days.  Not great, but not terrible.  I’ll take it.

That’s it for today.  Time to get my gear on and head out!  Think cold and think snow!