A Bit of Rain to Snow; Mild temps to Cold and More Slopes and Trail Openings 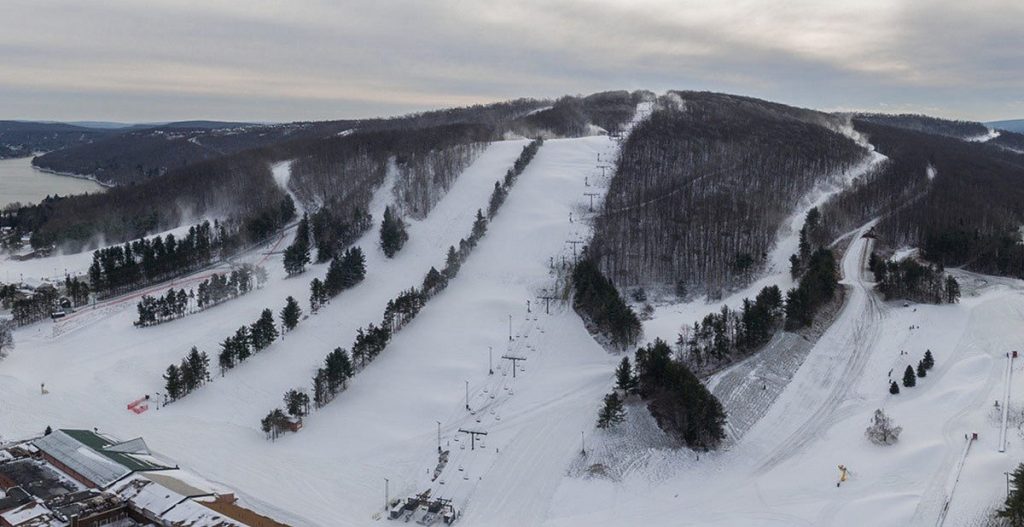 Check the SNOW REPORT for all of the details. We are just two ski resorts short of seeing every ski area in the region operating. Oglebay in Wheeling, WV snuck in and opened on Saturday.

While I’m thinking about – I want to give a quick thanks to Kenny Griffin for handling the FirsTrax and snow report for me yesterday. Usually HE is the weekday guy and I handle the weekends and Holidays – but we’ve had him heavily involved on a huge design project, so I’ve been your daily host. I was more than a little under the weather Saturday and Kenny stepped in and gave me the day off.

I’m back at it this morning and the first thing that I noticed was just how CRAZY our weather was on Saturday across the region. This past Friday saw highs in the mid to upper teens at most of the high elevations and then on Saturday the clouds vacated the area and the temperatures roared into the 50s (with a few 60° readings). 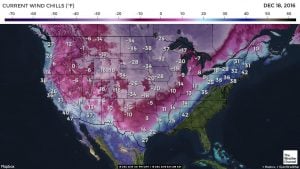 As you can see, we are about the only region in the United States that ISN’T COLD! That is changing as we get into Monday. Click to Enlarge.

Very cold air is lurking just to our west and north and some of it will find its way into the region. We’re seeing highs as of 7am anywhere from 50° to 59° but those will be the high temps for the day as we should now see those temps dip back down into cold, snowmaking weather for our snowmaking crews.

We’re also seeing some light drizzle across the region this morning and those could change over to snow later in the mid-afternoon.

I’m STILL getting a lot of emails (even after my Friday post) about the weather and whether or not the resorts will be in good condition for the Christmas to New Year week. I think Kenny summed things up pretty well on Saturday when he shared that this season was not going to offer “pristine conditions” for that all-important week, but all of the resorts WILL BE OPEN and offering increasingly more skiable terrain between now and then with more snowmaking temps on the way. That is hands down better than this time last year! 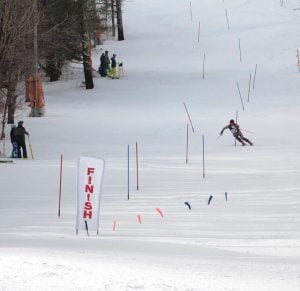 The Crescent Ski Council was out enjoying the weekend at Appalachian Ski Mountain. As you can see, conditions look pretty good! Click to Enlarge!

So after a ONE DAY PAUSE of mild temps yesterday – we’ll now see OPTIMAL snowmaking whether tonight and it may provide around-the-clock snowmaking for several ski areas on Monday. Then as we get into mid-next-week things are looking colder again.

So far this early in the season we’re seeing a pattern that seems to be like riding a roller coaster. A few days of frigid temperatures followed by a day of mild temps and light rain…followed by cold air, etc. That’s not bad really and that looks like the story for these next ten days as we head to the end of the year.

As for TODAY – Here’s an indicator of what we’re seeing. Lenora Testerman and her crew of Canaan Valley provide us with the snow report at around 3am each morning. THIS morning at 3am it was 57°. As I was updating the 7am snow report it was 51° and according to their report “Rain changes to snow showers mid-afternoon as temps drop throughout the day.”

The temperature is set to drop about 30 degrees in the next few hours. Surface conditions consist of wet snow due to rain passing through our area. Speaking of base depths and conditions, most all of the ski areas are doing a really nice job this season about adjusting snow depths daily. All are doing well about labeling those conditions rather accurately although there IS ONE resort is still calling base snow as packed powder this morning. I can assure you that there isn’t any “packed powder” in the Southeast or mid-Atlantic right now.

If you are still concerned about the conditions and slope openings for your upcoming Christmas getaway – we can only tell you that things are looking pretty good right now for plenty of skiable terrain at all ski areas and each of the resorts ARE getting more slopes open as we speak. We’d expect even more trails to be opening over the next week and into the actual week between Christmas and New Year. There IS a hint at some “under-developed snow” on the Tuesday/Wednesday after Christmas but if that weather pans out, use that day to go on an excursion that you wouldn’t otherwise do. Take in a movie, go bowling or take a short trip in close proximity to the ski area that you wouldn’t normally do.

As Kenny mentioned yesterday, he and his fiance are traveling to Snowshoe during the Holiday week and I will be there with my family and some friends. Things are looking awesome for skiing or riding all week (except for that Tuesday/Wednesday mention) and then things go COLD again.

If you’re going to be at Snowshoe that week, give me a shout out and maybe we can do some turns. Actually we’re hoping to visit Canaan Valley and potentially Timberline that week as well. There are some plans for Kenny and I to do a LIVE SLOPESIDE BROADCAST as well…so come and hang with us.

Former Olympian Christin Cooper was at Appalachian Ski Mountain on Saturday – much to the delight of some of the young kids who got the message that she was coming out. We never saw anything about it, but thanks to our own, Hope Caroselli, she was able to grab a couple of images and text them to us. That was a great treat to the kids who were there and it offered some great, one on one, attention for them as well. 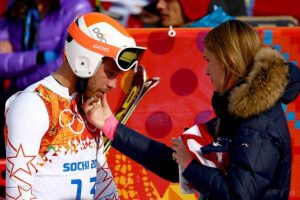 If Christin’s name sounds familiar – it should – as she was the Olympic reporter for NBC who’s interview brought Bode Miller to tears shortly after he finished the race and won the Bronze Medal. She caught a ton of negative attention after she was seen on camera asking prodding questions regarding Miller’s brother Chelone “Chilly” Miller, who died suddenly the year before—and those questions caused the skier to break down in tears on camera. 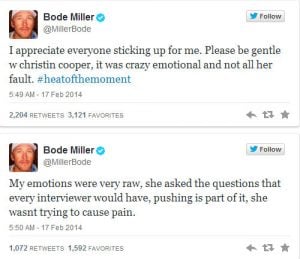 Miller himself QUICKLY came to her defense on social media asking the public to go easy on Cooper as she was only doing her job and asking the questions that any good reporter would ask.

Cooper herself was an accomplished Olympian.

As a member of the U.S. Ski Team, Cooper raced on the World Cup circuit from 1977-84. Starting the 1977 season on the “C” team, she made her World Cup debut at age 17. She competed in the slalom at the 1978 World Championships in Garmisch, West Germany, but did not finish. 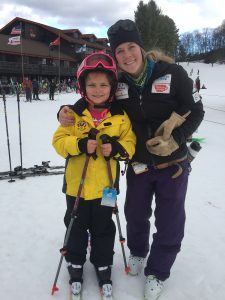 Cooper’s best season in international competition was in 1982, when she won three medals (two silvers and a bronze) at the World Championships at Haus im Ennstal, Austria. She also had three World Cup victories and placed third in the 1982 World Cup overall standings. The previous year, 1981, she finished fourth in the women’s overall and second in slalom.

Cooper retired from international competition following the 1984 season, in which she was the runner-up in the season’s giant slalom standings. She completed her racing career at age 24 with five World Cup victories, 26 podiums, and 65 top tens.

Previous Post
We’re Thawing Out From the Icebox That Was Friday
Next Post
MOTHER NATURE, ARE YOU LISTENING?