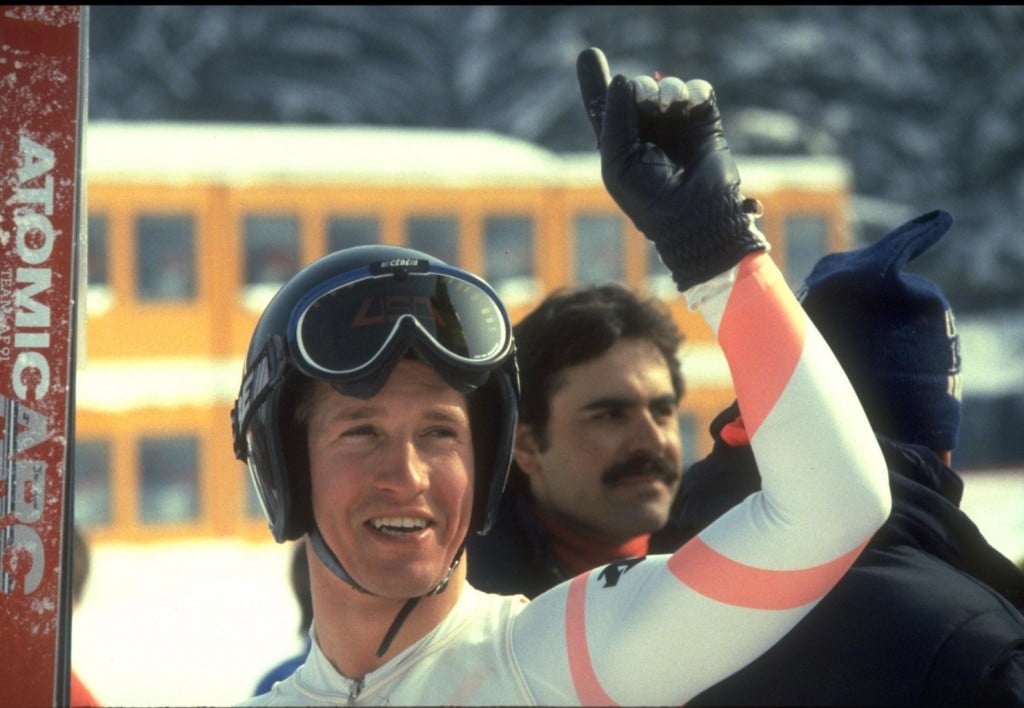 With all of the news of Winter Storm Jonas taking the headlines over the last couple of days, I actually missed the news that Olympic Gold Champion, Bill Johnson passed away at the age of 55.

Bill was a ski racing champion during the years that I really began to take notice of snow ski racing and the superstars of that time. I was 32 years old when the brash 23 year old first burst onto the scene during the World Cup season of 1984 where he won the storied Lauberhorn downhill in Wengen. That was the first American men’s World Cup downhill victory in the modern era. The very next month, he backed up that win with an Olympic Gold in Sarajevo and then closed the season with wins in Whistler and Aspen. 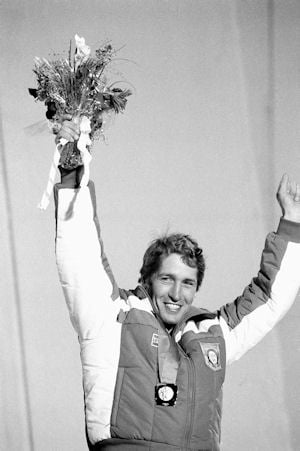 Bill Johnson after receiving his gold medal at the 1984 Winter Olympics. (Michel Lipchitz/AP)

While winning was news in and of itself, it was Billy the Kid’s brash, “Joe Namath”-like character that attracted many to him. Mr. Johnson’s brief, spectacular career was concentrated in a single year, 1984, when he boldly predicted that he would win the gold medal in the downhill at the Winter Olympics in Sarajevo.

Skiers from the traditional Alpine powers in Europe and even some of his teammates considered the 23-year-old Mr. Johnson a brash upstart, as he reveled in his image as the bad boy of skiing. They gave him the nickname of “Billy the Kid”.

“Basically, any downhill skier is a daredevil, and I’m no exception,” he said before the Winter Games in the former Yugoslavia.

“I like to drive cars faster than 100. I like to go over bumps in my car and get airborne. I like to drink. I chase girls full time, but I only drink part time.”

I think it was that quote that made millions take notice.

In January 1984, one month before the Olympics, Bill Johnson backed up his bravado by winning a World Cup downhill race in Switzerland. By the time he got to Sarajevo, his confidence and ability were at their peak.

“I don’t even know why everyone else is here,” he said. “Everyone else can fight for second.”

He was fearless in a sport with one simple goal: be the fastest person down the mountain.

Bill Johnson was the kind of guy who would have THRIVED in the social media world that we now live in as he was one, amazing, in-your-face guy. He was the stuff of legend and he would often embarrass fellow teammates with his brash, bold predictions. Fellow team members of that era would label Bill as a “totally rare cat”.

The fact that he skied with reckless abandon was infuriating to his competitors, who were left to watch on in awe and disbelief. He was defying physics that year, and flouting convention. That’s what rubbed so many the wrong way. The unconventional is rare in the sport of ski racing.

Christin Cooper, who was on the 1984 US Ski Team (and who won Olympic Silver that same year) wrote,

As a member of that Olympic Team in Sarajevo, I felt embarrassment and also pride over his brash proclamations that gold would be his.

We, the women’s team, felt almost protective of him, like… “Bill… seriously? You really want to be doing this?” Declaring victory before taking the start, in ski racing, just wasn’t done. And hasn’t been done since, has it? And it’s not like Bill started a trend. If you proclaim it, it will be so. Who has the nerve to defy such odds?

But Bill had always been maddeningly irrepressible. Day, night, in the Olympic Village, in your face!! He never let up. Can you imagine Bill, on that ride, at his peak, in the era of social media?

That 1984, he was riding a comet. His skis were rockets and he knew it. Snow conditions were perfect (mostly soft) for his loose style and touch and he just gleefully hung on for the ride, until his confidence grew to where he couldn’t be denied.

This is was what was so infuriating to his competitors, who were left to watch on in awe and disbelief. He was defying physics that year, and flouting convention. That’s what rubbed so many the wrong way. The unconventional is rare in our sport.

Bill believed he was destined for greatness. He spoke about it all the time. And in the end, he wasn’t wrong. I’m proud to have known him and to have been witness to one of the wildest, most unlikely, rides into history ever taken on skis.

The good, the bad and the ugly. That was Bill. And he proudly, even gracefully in the end, owned all of it. He gave us his irrepressible unapologetic, self. A rare gift indeed.

Johnson’s Olympic gold punctuated a stellar Olympics for the U.S. Alpine Ski Team in Sarajevo, winning five medals including gold from Johnson, Deb Armstrong and Phil Mahre, silver for Christin Cooper and Steve Mahre. His accomplishments motivated an entire generation of American ski racers, with the team’s current success rooted in the achievements of that 1984 Olympic Team.

Born in Los Angeles, Johnson grew up ski racing at Bogus Basin in Idaho, then moving on to Mt. Hood in Oregon as well as the racing program at Mission Ridge, WA.

Bill Johnson, a onetime car thief who found salvation as America’s rogue of the slopes, winning the Olympic downhill race in 1984 to become the first male skier from the United States to capture a gold medal in Alpine skiing, died Jan. 21 at an assisted-living facility in Gresham, Ore. He was 55.

His death was announced by the U.S. ski team. He had been in declining health since a near-fatal skiing accident in 2001. He had been partially paralyzed since a major stroke in 2010.

He retired from competition in the late ‘80s after a series of injuries and personal setbacks. But with the impending 2002 Olympics in Salt Lake City, he staged a comeback. On March 22, 2001, he was critically injured in a crash at The Big Mountain near Whitefish, MT during the U.S. Alpine Championships. Near death, he remained in a coma for three weeks before regaining consciousness. While he did ski again after the accident, his racing career was over. In recent years, medical complications increased and he was confined to an assisted living facility.

Last March, on his 55th birthday, friends and ski racers around the world reached out with tributes to one of the greatest downhillers of all time. Steven Nyman and Marco Sullivan wish Bill Johnson a happy 55th birthday via the video below.

Lately we’ve lost some big named entertainers and while they’ll all be missed, I have to admit that hearing of Billy the Kid’s passing kind of hit home for me. Rest in peace Billy.

Previous Post
Let’s Talk Snow and Awesome Conditions for Sunday!
Next Post
You Asked for It, Well You Got It