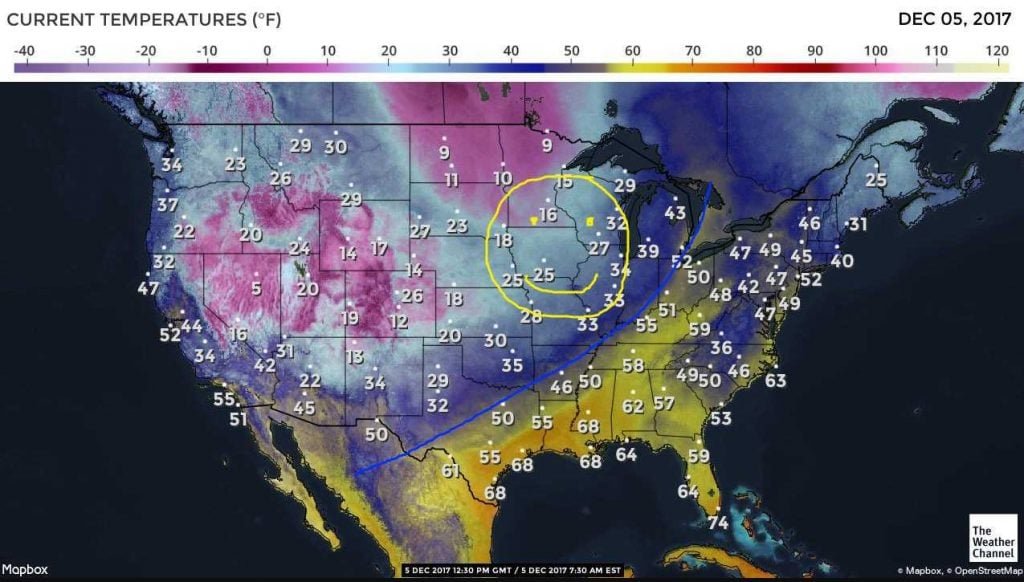 Today is the final day of unseasonable weather as a strong cold front is barreling towards us right now.  The slow start to the season will be a distant memory soon enough as we’re going to go from October-esque weather into the icebox in a matter of a couple days.

After 8 days now of talking about it, the huge pattern change that I have been harping on is finally at our doorstep.  I plan on doing some yard work today while it is still mild out.  I’m hoping it’s the final time this year I have to do it!

One look at the US temperature map this morning and you can see where the cold front is.  I’ve drawn a blue line on there just in case you can’t spot it.  Behind the front you can see that winter lovers are all smiles right now. 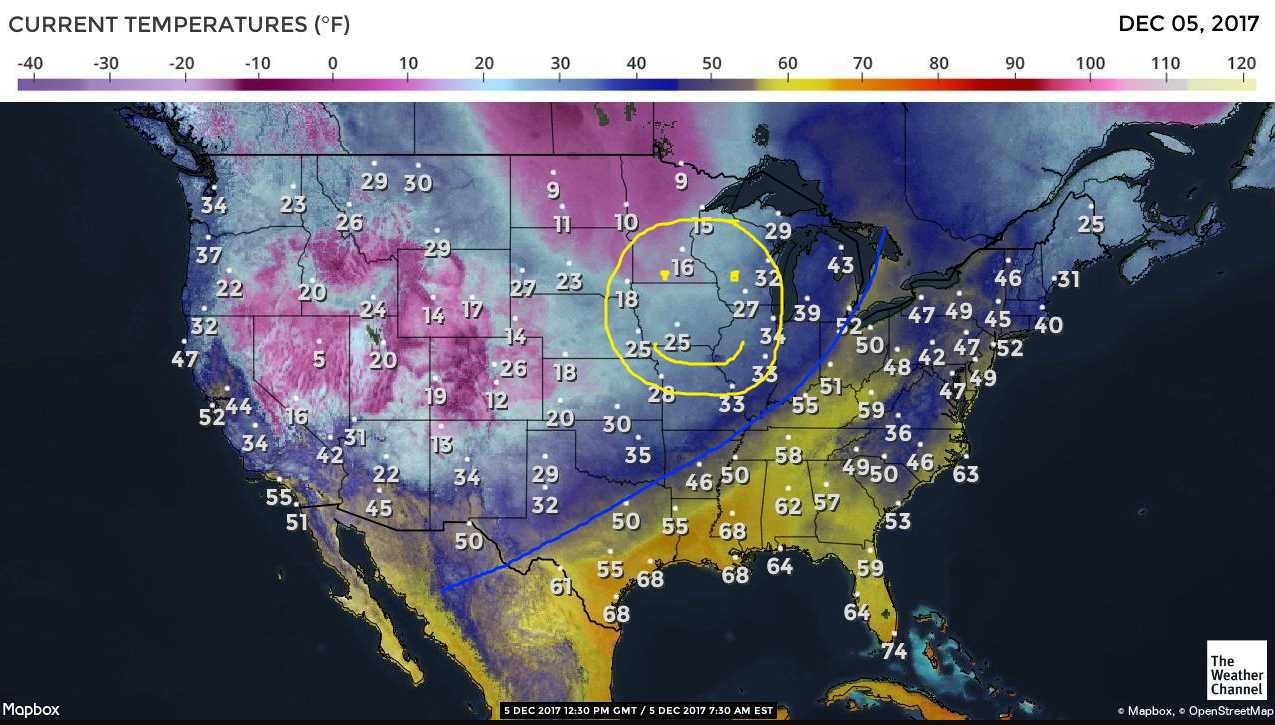 That front will move through tonight and we’ll see a few ski areas probably get the snow guns going during the overnight hours.  The really cold air doesn’t move in until tomorrow though so I’m not expecting the widespread snowmaking to begin until tomorrow night.  So far this season I’ve only had to worry about updating the snow report for 4 resorts.  That is going to change come Wednesday morning and make my morning routine a little more tedious.  I’m looking forward to it though!

I’ve made it pretty obvious how pumped I am for this cold snap and Brad Panovich must feel the same way as he sent in his latest video forecast last night and he is just as amped as I am!  Here’s his latest video…

I was watching this in bed last night and when he said “This pattern…it’s really epic” I got pretty stoked.  The next two weeks are going to be very exciting.  It’s been a while since we had cold air get locked into the region for this long.  The past two seasons have been roller coasters in terms of winter weather and Mother Nature has toyed with my emotions way too much.  WE DESERVE THIS.

As Brad mentioned in his video, this stretch of weather is going to ensure stellar conditions for the holidays.  I’ll be heading to Snowshoe the day after Christmas and I am absolutely ecstatic to know that conditions will be excellent.  I feel like I’m not going out on a limb here when I say you can expect the same for all of the other ski areas in the region.  If you have a holiday ski trip planned here in the Southeast, get pumped!  Even if we can’t maintain the ridiculous cold pattern into Christmas, the base depths and trail count by that time should be fantastic.

The Christmas time period is several weeks off though, so let’s just focus on what we can expect in the immediate future.  As I already said, widespread snowmaking will begin tomorrow night.  The North Carolina and West Virginia ski areas should be able to make snow around the clock beginning Thursday.  Ditto that for Wisp up in Maryland.  A little bit of natural snow in those locations will be a nice boost as well.

In Virginia and at Ober Gatlinburg in Tennessee, snowmaking looks to mainly be confined to the nighttime hours for those resorts.  Wintergreen is a little higher in elevation so they might be able to eek out some daytime snowmaking a couple of days later this week.  Around the clock or not, it will be nice to see some prime snowmaking conditions for those guys.

As for openings, Snowshoe remains the only open ski area right now.  That will continue for at least another day or two.  Here in North Carolina, Appalachian Ski Mountain announced yesterday that they will open this coming Saturday.  From their site…

Appalachian Ski Mtn. is excited to open for the season this Saturday, December 9! Sustained cold temperatures later this week should allow ASM to ski and ride Saturday with a majority of slopes open. 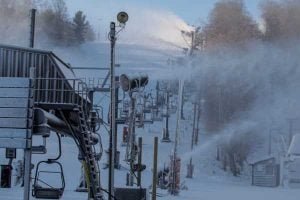 For the comfort of our guests, ASM will only have very limited spot snowmaking on open terrain. There will be no snowmaking whatsoever on any beginner areas and on most intermediate slopes during operating hours.

Snowmaking will be ongoing on all slopes during non-skiing hours for as long as temperatures allow.

This forecast looks like a wonderful and strong start to the 2017-18 season!

As part of our Opening Day tradition, the first 100 guests to the ticket cashier will receive a FREE ski ticket!

Remember Midnight Blast Sessions last all season long now! ASM will be open until Midnight every Friday and Saturday Night from December 9 – March 17.

The Appalachian Ice Arena is also open with 3 sessions daily beginning at 12 noon, 2:30pm, and 7pm.

As I wrote about yesterday, Cataloochee is also planning on re-opening Saturday as well.  Beech Mountain hasn’t announced anything, but I would think they are shooting for a Saturday re-opening too.  If I had to guess, I would say Sugar is going to be aggressive and go ahead and re-open on Thursday.  As a side note, be careful going to their website right now.  It’s been hacked and redirects to malware.

As of right now, those are the only definitive openings for later this week.  Canaan Valley and Timberline have next weekend as their set opening dates and they’ll probably stick with those.  None of the Virginia resorts have said anything about potential openings though.  That doesn’t mean it won’t happen this week, it just means that they are waiting to see how good they can get things looking before opening to the public.  The same goes for Winterplace, Wisp, Wolf Ridge, and Ober Gatlinburg.  We haven’t had any dates mentioned by those resorts either.  If it doesn’t happen this weekend for any of the above ski areas, we will definitely have a mass of openings come next week.  Whatever happens, we’ll make sure to post it here on the site as soon as we find out!

Enjoy this final day of fall weather while you can.  It’s about to get cold for a while!