It’s Beginning to Look a LOT Like…Winter in the Mountains! 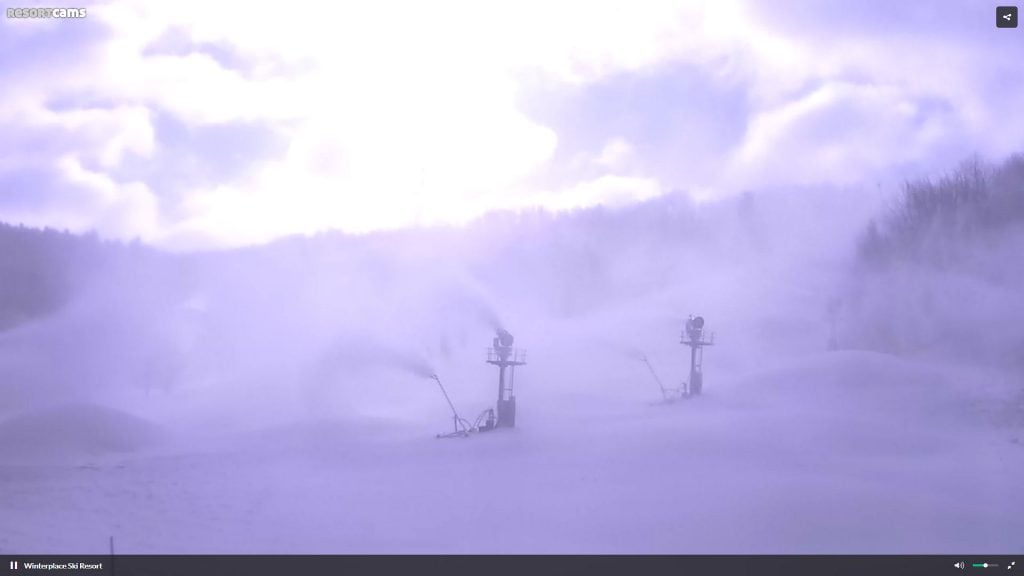 NATURAL SNOW IS FALLING IN THE MOUNTAINS! SNOWMAKING CREATING WHITE OUT CONDITIONS AS SNOWSHOE MOUNTAIN AND SUGAR ARE OPEN WITH MORE TO FOLLOW SATURDAY!

I got started EARLY this morning on updating snow reports and imagery and all I can say is that I think we need more help. My cell phone has been buzzing all morning. I’ve taken office calls this morning asking things like, “Yea, are ya’ll open for skiing?” and my skiMail INBOX has been bombed with everything from ski areas who have not yet connected with us – doing so – to three requests from people wanting to purchase webcams.

We’ve gotten two calls to build new websites and on top of all of that Kenny Griffin and I were hustling to monitor the conditions and get the SNOW REPORT up to date. On top of all that, I was compiling this morning’s FirsTrax report.

Suffice to say that this morning has been THE BUSIEST morning here at “SkiSoutheast Central” so far this season.Seems that there is a TON of pent up desire for ANY good news about snow and cold temps.

Snowmaking to the degree we have going on today can definitely get people’s juices flowing. On top of that – NATURAL SNOW is falling pretty much everywhere across our coverage area and while it isn’t a BIG SNOW – it IS SNOW and that trumps everything.

So WELCOME to the UNofficial first day of Winter!

Check that out as Brad is sharing some AWESOME news for ski area mountain ops and visitors alike.

Here is a Tour of the Area…

Snowshoe Mountain Resort – 8° – They have thus far seen 1″ of natural snow overnight and 7.5″ on the season despite the fact they are only reporting 6″. They are open on this snowy day with 9 slopes and trails. You can expect that to change a good bit in the coming days.

Check out the LIVE CAM and see how HARD it is snowing!

Shawn Cassell of Snowshoe posted, “Last night was a cold one and it brought with it great conditions for our snowmakers to churn out plenty of fresh snow. And just to put the icing on the cake, we also received about an inch of natural snowfall, so be sure to get out there and enjoy these great conditions going into the weekend.

Progression Park is open as a ski trail, but the terrain park features have been pulled out. Five features are now on the right side of Powder Monkey, including boxes, a rail and a pyramid feature.

Looking to save on your next trip to the Mountain? Our 3forAll pass gets you three days of skiing for just $159! Not what you’re looking for? Take a look at our other Deals & Packages at snowshoemtn.com.”

Wisp Resort – 18° and a local weather reporter is sharing one-half inch of snow has fallen. They are making snow like crazy and we HAVE captured the popular timelapse from that LIVE STREAM. Kenny Griffin compiled the content and that was really popular last season. You can see JUST HOW AMAZINGLY FAST a ski area can go from NO SNOW to ready to ride on.

Here’s the one from last season as well!

Canaan Valley Resort – 11° – About 1″ of natural snow and they are opening SATURDAY!!!  It’s a terrible time for the webcam to be offline, but they are making snow and we are trying to determine what the issue is with the camera.

Timberline Resort – 11° – About 1″ of natural snow and their camera has also been down for some time and we were told that they were getting it handled. Also the word WAS that they were going to open the 16th, but now that seems to have changed to the 23rd.

Winterplace Resort – 14° – .5″ of snow so far overnight and the snowguns are blasting and they MAY be opening as early as Sunday. 3.5″ of snow has fallend so far this season.

Wintergreen Resort – 10° – They are seeing light snow this morning and making snow in a manmade-blizzard kind of way. They plan to open December 17th.  I was literally about to share the link to their LIVE CAM but we just heard from their mountain ops and unfortunately both live cameras are down right now. We’ll post an update when and if they go back online.

Beech Mountain – 8° and they saw .1″ of snow and they have been BLASTING the slopes with WHITE OUT conditions! They are opening tomorrow for day and night sessions.

Sugar Mountain – 8° – reporting POINT 1″ (.1″) of snow this morning which matches the official CoCoRahs report from atop the mountain. The TRUTH IS, I think there is more than that on the ground right now! I’m thinking about .5-1″ of snow has fallen thus far.

Sugar is OPEN again today so they turned their base area around in less than 24 hours and things like pretty awesome there. They are open with 6 slopes and trails and not sure about night skiing as they don’t mention that on their website.

Wolf Ridge Resort – 11° and snow flurries can be seen on their LIVE CAM. Wolf plans to open on Saturday.

Cataloochee Ski Area – 16° and making snow with a TRACE of snow as well. They plan to reopen Saturday. Not sure what they did with the live camera from the lodge but it’s smaller than ever. However, here is a great shot of Chris Bates doing his grooming thing this morning.

I gotta run! Check back later for more and email me in the interim at: [email protected]

Previous Post
See How Much Snow a Ski Area Can Make in 24 hours at Wisp Resort!
Next Post
Up to 3.5″ of Snow Fell in the Mountains! See Where…as Well as ALL of the Ski Resort News!