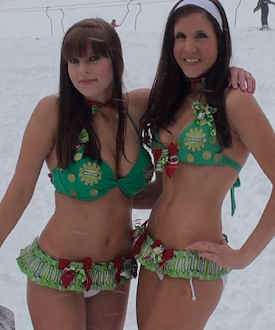 A year ago today Liz Lott and Robin Adams were winning the Beech Mountain Resort Bathing Beauty contest amid heavy snowfall and 10° temperatures! That made for a quick contest and a bunch of unhappy guys that the ladies couldn’t stick around any longer due to the bitter cold and snow.

Beech Mountain features that event again today as a part of their annual Winterfest festival and with temps in the 40s, the ladies (and screwball guys) will have an easier time dealing with the elements.

I’m going to be out of town today, so if anyone is up there shoot some photos and vids for us!

“It really is a fun-filled weekend. You don’t have to ski or snowboard to come and celebrate the winter season with Beech Mountain,” said Talia Freeman, director of marketing at Beech Mountain Resort.

The Nesquik Bathing Beauty competition kicks off Winterfest at 11:00 a.m. on Saturday as men and women ski or snowboard down the Play Yard Slope in their skimpy beach attire. Contestants are judged on beauty, poise, outrageousness and originality. Registration takes place from 9:00 to 11:00 a.m., a $10 registration fee is required and prizes are awarded to the top three contestants.

Check out the complete schedule in the ANNOUNCEMENTS section on the front page!

I couldn’t help but look at the calendar this morning. First because it is my youngest daughter’s birthday (Happy Bday Mattie!) and mostly because I was trying to search the foggy database of my mind to remember when we’ve been so far into a ski and snowboarding season when there had been so little snowfall AND so very little in the way of consistently cold weather.

Some past ski seasons have started as early as Halloween however we all kind of think of a typical ski season as being the weeks from Thanksgiving through the end of March. Due in part because of new snowmaking technologies and because of past season weather patterns we’ve seen ski areas stretch the season to run from around mid November through the first week or so into April. Most ski areas opt to take advantage of the Thanksgiving to mid March period as the average length of a typical season.

Usually by December 20th (at the latest) things look pristine and most ski areas are 100% open and operating with base depths that are approaching the National Debt. Of course this season is not your father’s typical ski and snowboarding season as so far MOST of the ski areas haven’t even come close to getting 100% open, and most have had to deal with very little in the way of snowmaking weather.

Thankfully the last ten days have been kinder to most of the region and all of the ski areas have put down some good manmade snow. Up to 17" of natural snowfall fell in the last week at places like Wisp Resort in Deep Creek, Maryland. 14.3" of natural snow has fallen at Canaan Valley so far in the first seven days in January and a few more inches than that have fallen at Snowshoe.

Mother Nature hasn’t quite as kind to the ski area communities further south into Virginia, North Carolina and Tennessee as both Virginia and Tennessee ski areas have seen only an inch or two of snow ON THE SEASON. The North Carolina ski resorts picked up 5" or so of snow in the last week and thankfully saw some bitterly cold temps to make snow. However Beech Mountain leads the way in terms of natural snowfall so far this season in the state of North Carolina with 17" of snow to date.

If we consider that an average ski season runs 18 weeks from Thanksgiving through the end of March, then we still have 12 weeks left or two-thirds of the season still left to play. That said, we’re still in the first one-third of the season. The reason that I bring this up is that some of the emails that I’ve gotten seem to be already writing this ski and snowboarding season off. Sure, weather gurus seem to be saying that this entire season will be challenging for our ski area snowmakers, but if we use a little math things are not "all lost".

Consider that with Snowshoe Mountain’s 56" of snowfall so far, they are at 31% of their annual snowfall totals…at the 33% point in the season. Not that far off, right?

Beech Mountain is at 17" of snow so far and that would be 21% of their annual snowfall at the one-third mark of the season.

Granted, things have been volatile in the sense that most of this season’s snow has come in three bursts of snow. However, we’ve still got a lot of season (hopefully) left and the talented crews at every ski area in the Southeast and Mid Atlantic are working their tails off to make as much snow as possible – whenever possible – and there’s a LOT of great, skiable terrain available to go and play on.

So get your rears off the couch. Pack up and head to the mountain of your choice. There’s lots to do this weekend and you’ll thank me later. Today’s forecast looks pretty decent for the day sessions across the region with some scattered showers forecasted in the evening at some locations. Check the snow report page and www.HighCountryWeather.com for all the forecasts for YOUR favorite ski hill and get going.

Good LORD! 40-50" OF Base increases in less than a week! Appalachian is boasting a 39-69" base this morning and Sapphire, which wasn’t even open and had NO SNOW on their slopes 10 days ago is now reporting 48-66"!

It’s been two days since any snowmaking was happening in North Carolina so all that base jump happened in 7-8 days. Since then, despite lows in the 40s only Wolf Ridge is reporting a drop of 2" in base. They’ve no doubt dropped everywhere. Kudos to them for reporting some drop.

Check the snow report for details, but here’s what jumped out to me today!

When: Jan 07, 2012
Where: Appalachian Ski Mtn
What: Ladies only park session

That’s right ladies; ATP bringing back this event series just for you!

On Saturday night, January 7, ATP will construct a terrain park area with features specifically designed for learning and progression that will be open to ladies only. We want women of all ages and abilities, both ski and snowboard, to get together and ride in a laid-back environment among friends.

The session will begin at 7pm, with a flexible, open format of whatever you girls would like to see. If you just want to make laps through the girls-only park, sounds great! If you are starting out and want to learn how to slide your first box, or how to hit a jump properly, ATP will be staffing select Trick Tip Advisors who will be happy to help you progress. Once the session has come to an end, we have lots of prizes which will be raffled off among all participants. Best of all, the event is Free with the purchase of a ski ticket!

All competitors in ATP series are required to fill out a waiver, either on site or downloaded HERE and brought in the day of the event.

Beech Mountain is open with 10 of 15 Trails and Ice Skating.

Cataloochee has all but Cat Cage Terrain Park Open. Tubing is open as well/

Sapphire Valley is 100% (with both trails and tubing)

Sugar Mountain has 13 of 20 trails open plus ice skating and tubing. They had a slope full of people at 8:20am this morning.

The 17th annual National Winter Trails Day is back at Sugar Mountain Resort. The event offers children and adults new to snow sports the chance to try snowshoeing for FREE. Discover the fun and fitness of snow sports. Snowshoe rental and guided tours are free. Guided tours are available on a first-come first-serve basis at 9am, 10am, 11am, 12pm, 1pm, 2pm, 3 pm and 4pm. The program includes a 45 minute tour and snowshoe rental. Adult tours are for 12 years or older. Children’s tours are for 8-11 year olds. Sign up at least 15 minutes prior to your tour time at the Ski/Snowboard School. Live bluegrass music performed by Boss Hawg this afternoon from 4pm until 6pm.

Wolf Ridge is showing 5 of 23 trails open with tubing open as well.

Bryce Resort is reporting 7 of 8 trails and tubing as open through Friday morning. They may have another trail open for today.

Massanutten Resort – Diamond Jim, Upper Showtime and the CMB Terrain Park are now open. They now 50% of the mountain open with 7 of 14 trails and snow tubing.

Wintergreen Resort is open for day and night sessions on 8 of 26 trails with snow tubing open as well!

Snowshoe Mountain has a whopping 44 trails open for riding today with 44 of 60 trails open. They offer snowmobiling, tubing and more fun around the village as well. We know you’ve been waiting, and today is the day that we’re opening up Cupp Run on the Western Territory! It’s true, Snowshoe has the most open terrain in the region, but that’s just not enough for us — we also have the best open terrain in the region, across 146 acres! Get up here and get out on the snow.

Timberline Resort has 20 of 41 trails open and they are open for night skiing as well. you’ll enjoy some of the longest runs in the South (as long as 2 miles).

Winterplace Resort has added more trails and snow tubing as open. They are now boasting 20 of 27 trails and they have the Hickory Terrain Park and both snow tubing parks open!

Ober Gatlinburg has 5 of 9 trails open with tubing and ice skating as well.