No worries, theKENDOG is back! I know you all have missed me over the past week. I hope everyone had a merry Christmas and what not. I have been enjoying my holiday vacation down here in Charlotte. I love the mountains but I can’t complain about the view I have here on Lake Norman.  I did go up to Beech yesterday, but other than that I’ve been down here over the past week.  It’s been getting harder and harder to remain here though as I watch the improving conditions on the webcams!

<<< This is the view off my front porch this morning.  I love the mountains, but I also love waking up to this!

As Mike told you guys yesterday, I’ll be doing these morning reports for the next few days while he enjoys his time up at Snowshoe. Of course he has already emailed me this morning though, so I’m guessing he is doing a little bit of work stuff. No surprise there, that man is addicted to his job! I guess that’s how you have to be though when your own business. Now, if we could just get him to post some stuff over on the messageboard…He has a brand new GoPro so I know he’s got a ton of pics and videos. If you are reading this Mike (which I know you are), I want to see a trip report tonight!

The reason I’m taking over for the next few days is because of the lack of internet at the $8000/week rental house that Mike is staying at. That doesn’t even make sense to type. He’s been having to go to the Rimfire lodge to get any connectivity.  The Shoe is awesome in every way except for the fact that the internet up there is sparse. I don’t mind the lack of cell phone service. Heck, I kind of like it actually, but I have to have me some internet. I guess that’s just how my generation is.

Since I talked to you last, we have seen things do a complete 180 at the ski areas here in the region, excluding the Virginia resorts. Those guys have gotten the shaft once again so far this season when it comes to snow and colder temperatures. Everyone else is easily in the best shape they’ve been so far this season. When I was doing the ski reports this morning, it was nice to be able to increase the number of open trails at a few of the resorts.

As I already mentioned, I was riding at Beech yesterday and conditions were pretty darn good. There was a little crust in spots that made things interesting, but the snow improved throughout the day. It was really crowded though. That’s not a bad thing. That means more money for the ski areas, which they need after the sluggish start this year. The lift line for the quad was only 5-10 minutes max. I commend the lifties for doing an excellent job of loading people and making sure each seat had 4 people on it. Hopefully they can open up 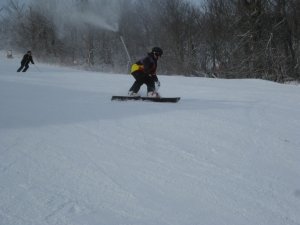 Powder Bowl soon though, because the bottleneck at the bottom was terrible at times. Overall, things are good out there and are only getting better. The same applies for every ski area here in the region.

<<< MellowYellow was enjoying Beech yesterday.  This guy is crazy to watch on his alpine board!  Click HERE for a full trip report from yesterday.

So in general, things are definitely turning around…FINALLY! After a slow and sloppy start to the season, it appears as if colder weather is here to stay, minus the next couple of days.  The first arctic air of the season arrives on Monday.  Between now and then, we will see some underdeveloped snow.  However, things get much colder on Monday.  When I say it’s going to be cold, that is an understatement. The NWS is forecasting a low of -6 degrees at Snowshoe for Monday night. Obviously temperatures won’t be that cold everywhere but all the ski areas will see prime snowmaking temperatures for SEVERAL days. In addition, we’ll see some natural snowfall as well. I’m pretty excited to head back up to Boone next week!  I’m going to try and do a quick screencast video forecast and post it over on High Country Weather here shortly, so be on the lookout for that. 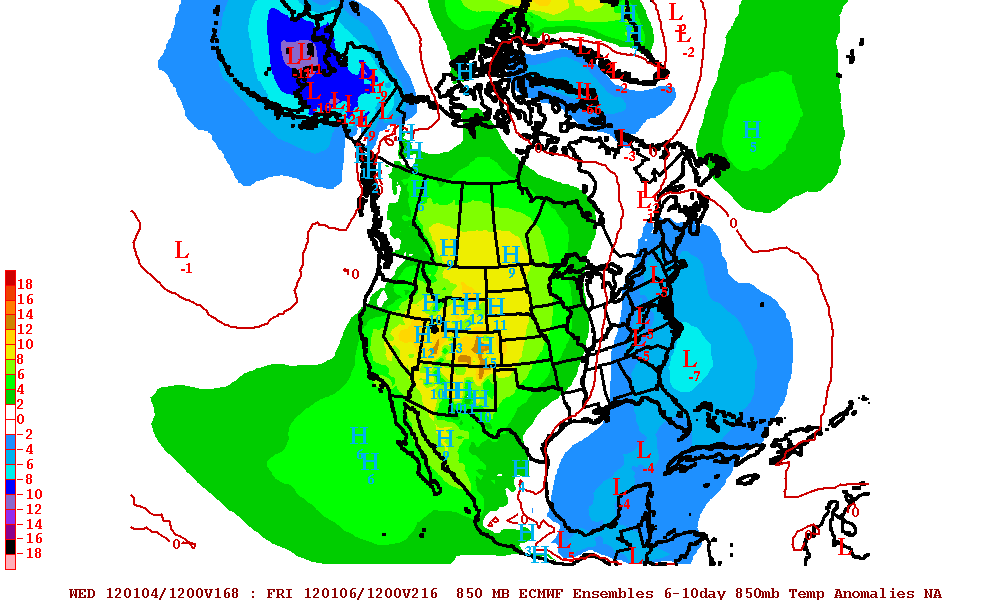 <<< This is the 6-10 day temperature anamoly forecast from one of the weather models.  Blue is good.  As you can see, the whole region is shaded in blue, which means colder weather!

This is the 11-15 day forecast.  As you can see, the colder weather looks to be staying for at least the next few weeks! >>>

I’m not going to go over each individual ski area this morning. Temperatures weren’t as cold last night as they have been, so not everyone was able to make snow. There are also a few ski areas with additional trails opening today, but in general things are pretty similar to yesterday. Head on over to the Ski Report page for the complete list of open trails, open lifts, morning temps, etc. That is all for this morning, I will talk to you tomorrow!