Back At It Again 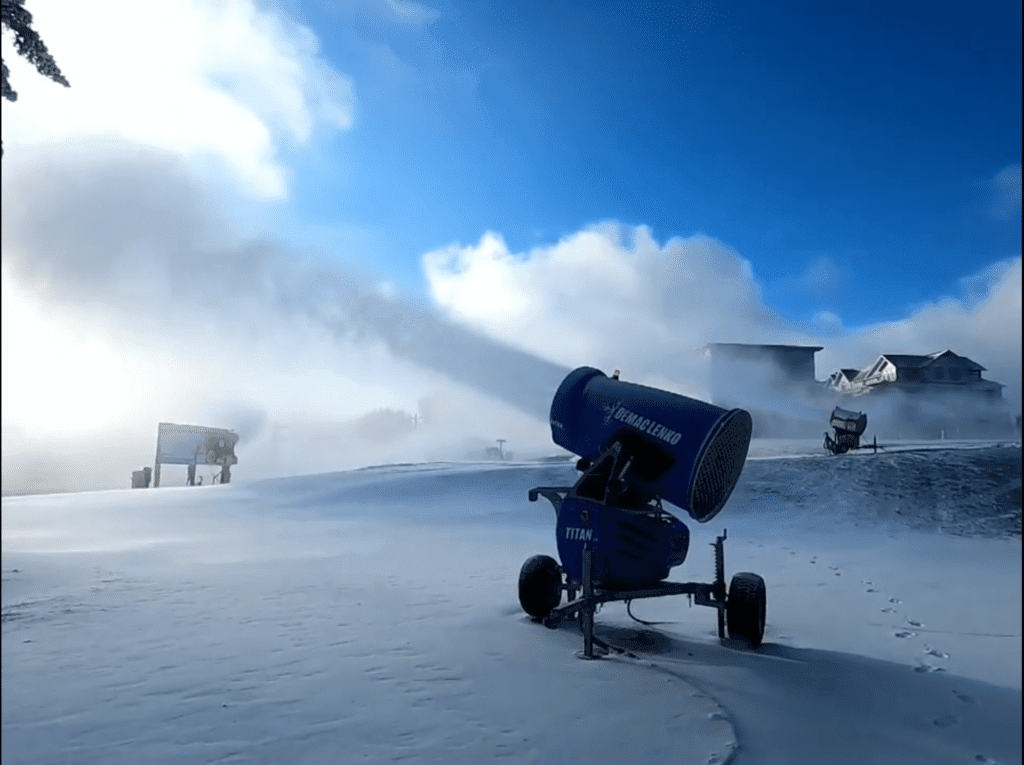 The mountains are alive once again this morning the roar of snowmaking.

Thursday’s roller-coaster ride dived into snowmaking territory late Thursday night and early Friday morning. That has allowed six resorts to crank up the guns in addition to a light dusting of natural stuff to help set the mood.

Cataloochee and Sugar Mountain are working to get open as soon as possible, and both are putting down some serious snow this morning.

The folks down at Cat hope to reopen tomorrow, and Sugar hasn’t announced an opening date just yet but a Saturday opening is definitely in play.

Beech Mountain and Snowshoe (check out this sweet video where our photo of the day came from) resumed snowmaking operations in preparation for the season-opening dates. They are joined by Appalachian Ski Mountain and Canaan Valley – who was the big winner with an inch of natural snow last night.

It looks like a winter wonderland in Davis on the cameras. All six resorts will look to make snow as long as conditions allow.

The West Virginia resorts look to have ample opportunity today as highs won’t break the freezing mark today and drop to the midteens tonight. The North Carolina resorts may crack the freezing mark, but it won’t be by much if at all.

There is a bit or warming trend for the weekend, but the real cold arrives on Tuesday. Our own Brad Panovich delivered his first skier’s forecast of the season as well as his winter outlook.

Check it out here.

As Mike mentioned in his Thursday afternoon post, I will be taking the reins with First Trax and the snow reports Monday-Friday in addition to other stories and updates throughout the season.

I feel a little like a kid who has been handed the keys to a Ferrari and I am looking forward to getting to know you guys throughout the season.

I’ve never been a fan of the “get-to-know me” activities, but I will give it my best shot in as few words as possible. I was born and raised in the High Country – I could see the lights of Beech Mountain from my bedroom window – and I currently reside in Roan Mountain. I grew up on the slopes and I am anxious to get back out there this season.

I started with Ski Southeast and Appnet six years ago in a variety of roles, and it has been an incredible blessing to become a part of the family that Mike has built in little ole’ Foscoe outside Boone.

Before coming to the Ski Southeast offices, I worked as a Sports Information Director for a small college near Johnson City. Since my Freshman year in college, I have worked as a sports writer and photographer covering high school sports and college football – mainly Tennessee – for several local and regional publications.

At home, I have a sweet two-year-old boy who keeps us on our toes and a patient wife who puts up with our chaotic life.

Enough about me, we are also excited to add Lindsay Robles to the office team. Lindsay will be a great asset this season. You will see her fingerprints all over our social media, events, and stories this season.

Lindsay is a newcomer to the High Country, but we will let her tell her story in the next couple of days.

We have an awesome team lined up for this year as we try to take things up another notch. We are always on the lookout for a couple of snow-loving souls. If you think are interested in joining Team Ski Southeast, check out this link.

It’s going to be an awesome year and I hope you join in on the fun.