We’re Back Up to 3 Open Ski Areas, Hopefully a Couple More to Follow This Weekend 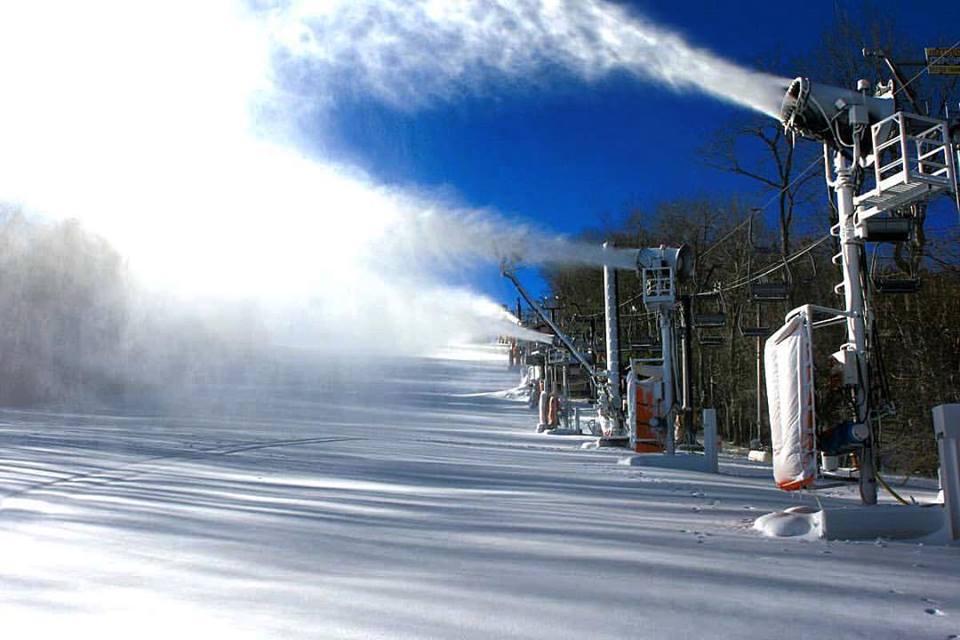 Just in time for the weekend, we’re seeing some of the previously open ski areas be able to resume operations thanks to the return of colder temperatures.  Two days ago, nobody was open.  Yesterday, it was just Snowshoe.  Today, we’re back up to 3 as Sugar Mountain and Cataloochee Ski Area are both open for skiing and riding.  Here’s a video from out at Cat this morning.  Looks good!

Sugar is open with 4 trails today and only the high speed 6-pack lift running.  I say only but in all honesty that lift is all you need.  It’s awesome.  Coverage looks rather lean this morning at the bottom but I’d imagine the top has got to be in much better shape.  I hope anyways! 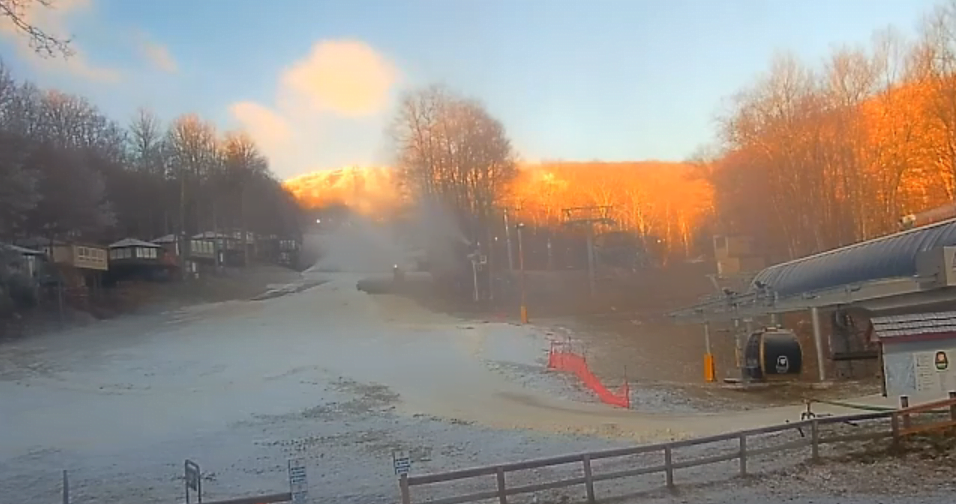 I speculated yesterday that Cat would re-open today and also that Sugar would go for it.  So far I’m 2 for 2…not bad!

Up into West Virginia, Snowshoe is open once again today and they remain the best choice to get some turns in as they have the most trails open (9) and conditions in general just look better up there right now. 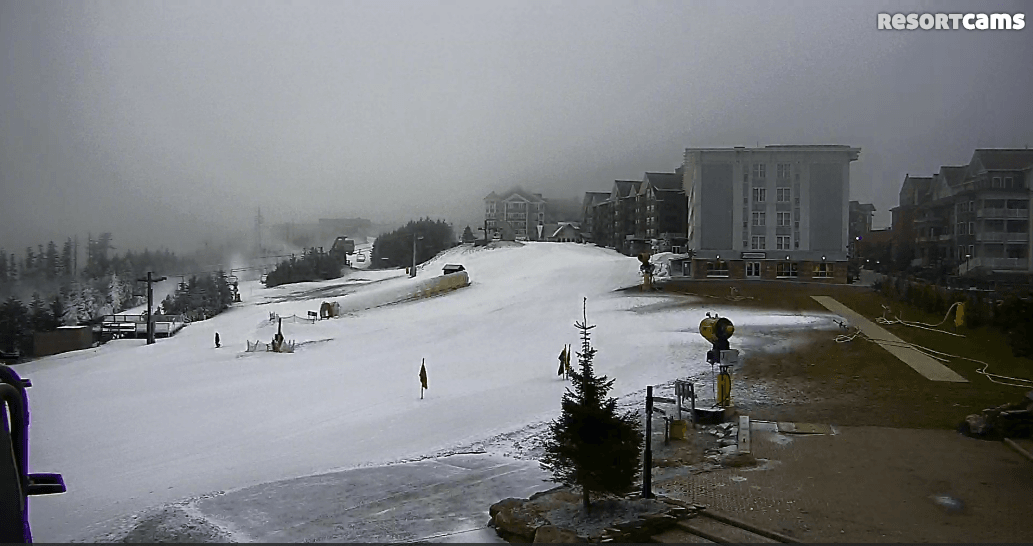 We’ll probably see some more terrain opening up this weekend at The Shoe.  Just what trails exactly?  I’m not sure right now, but they appear to be making snow all over the place as the Silver Creek cam shows snowmaking and they noted on their morning report that they have been making snow on Cupp Run too.  Either way, it should be a fun weekend up there.

Appalachian Ski Mountain and Beech Mountain are the other two resorts that have previously been open this season.  Both are currently blasting the slopes with snow.  App will probably have to cut the guns off shortly as temperatures will get into the upper 30’s out there today, but Beech might be able to keep them on all day, although I’m not sure how efficient snowmaking will be with temperatures hovering right around or just above freezing today.

Both resorts will be able to continue snowmaking tonight and right now, I’m THINKING (emphasis on thinking) that they will both open tomorrow.  App’s coverage doesn’t look all that great right now, but in reality all they need is a single night of snowmaking to cover that place.  They will make an announcement by tomorrow morning at 6:30am as to whether or not they will open, so make sure to set your alarm and get up early to check their website before driving up there.

Beech’s snowmaking looks to have been fairly productive in the last 24 hours.  The bottom of the mountain looks A LOT better than it did yesterday at this time.

Beech looks much better this morning.

They haven’t announced anything about a re-opening, but I’ve got to think they’ll open back up tomorrow.  If that is the case, an announcement will probably be made sometime today and we’ll make sure and post it on social media and here on the site.

Look for nighttime (and daytime for some) snowmaking to continue through Sunday as overnight lows will be in the 20’s  Hopefully we can get App and Beech to open up tomorrow because it looks like a pretty decent day to get some skiing and riding in.  If Beech opens I plan on being there so look for me and say hi!

Beyond the weekend, there’s some good (really good) and some bad, depending on how you look at it.  The latter portion of Sunday and the first part of next week will feature some more rain, mainly for the southern half of the region.  As it was earlier this week, it’s kind of bittersweet as we need it to help with the drought but it still sucks for us snow lovers.

Thursday and into next weekend is shaping up nicely though as the coldest air of the season is slated to arrive.  There is lots of talk in the meteorological community right now about it and it’s getting me pretty excited.  We will hopefully see widespread snowmaking and maybe even some more resort openings.  It’s still almost a week out but does look promising.  I’ll keep you updated all next week! 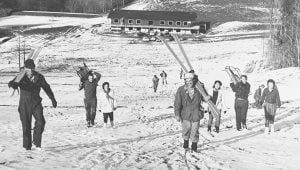 A photo from back in the day at App.

It’s still very early in the season but we do have a few events going on this weekend.  If Appalachian Ski Mountain is able to open tomorrow, they will be celebrating their 55th Anniversary Weekend.  55 years!  To celebrate over a half decade in business, they will be rolling back lift ticket prices to what they were in 1962.  That means $5 lifties on Saturday and Sunday!

Cataloochee has two separate events going on this weekend as well.  The first is the Ski and Snowboard Swap Shop events where you could find some new (to you) gear for cheap.  All proceeds will go to benefit the Cataloochee Ski Patrol.  From their site… 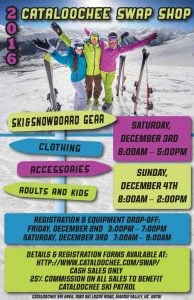 The Cataloochee Ski & Snowboard Swap Shop is a fund-raising event for the benefit of the Cataloochee Ski Patrol (CSP). CSP will retain a 25% commission on each item sold.  If you would like to donate all proceeds from the sale of your items, please let us know at check-in.

On Sunday, Cat will be holding their annual Can-U-Ski Food and Coat Drive.  This is a very cool event that always draws a lot of people.

Cataloochee / Haywood Christian Ministries Can-U-Ski Food and Coat Drive
Help us give back to the local community by bringing 24 cans of food or 2 warm winter jackets of good quality and receive your lift ticket on that Sunday from 8:30am-4:30pm for free. It’s a $65 value! 8:30am – 4:30pm.

So there you have it.  It’s been a rough week but there are some decent early season conditions out there for you this weekend.  There’s also the opportunity for CHEAP and even FREE skiing/snowboarding.  Can’t beat that!  Enjoy the weekend and think cold and snow!