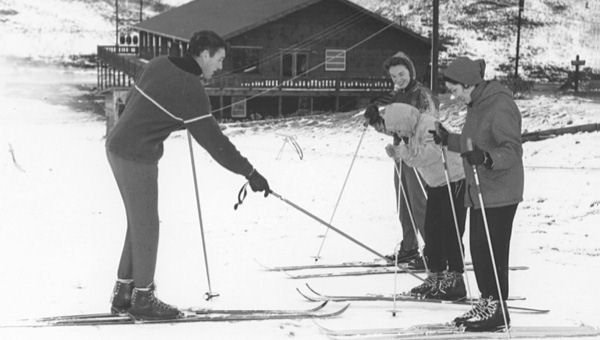 We Have a NEW Member to the Southeast Ski Family…

Congratulations to Lori Epp, the Director of Marketing at Wisp Resort up in beautiful Garrett County, Maryland. Lori had a baby boy on Thursday. Lori worked right up until it was time to deliver and on Friday she wrote me, “It’s a boy! Cole Nicholas was born yesterday at 6:42pm weighing in at 8lbs 3 oz & 19″ long.”

That is great news for Lori, her and her Wisp family. That’s a tight nit group up there and very family oriented and I’m sure that they’re all celebrating with Lori. Based on the height of the newborn, he will tower over Lori by the time he’s 12 or so!

THE REST OF TODAY’S NEWS IS NOT AS AWESOME…

It could be sub-titled, “Good Grief Charlie Brown! What Happened?!?!” 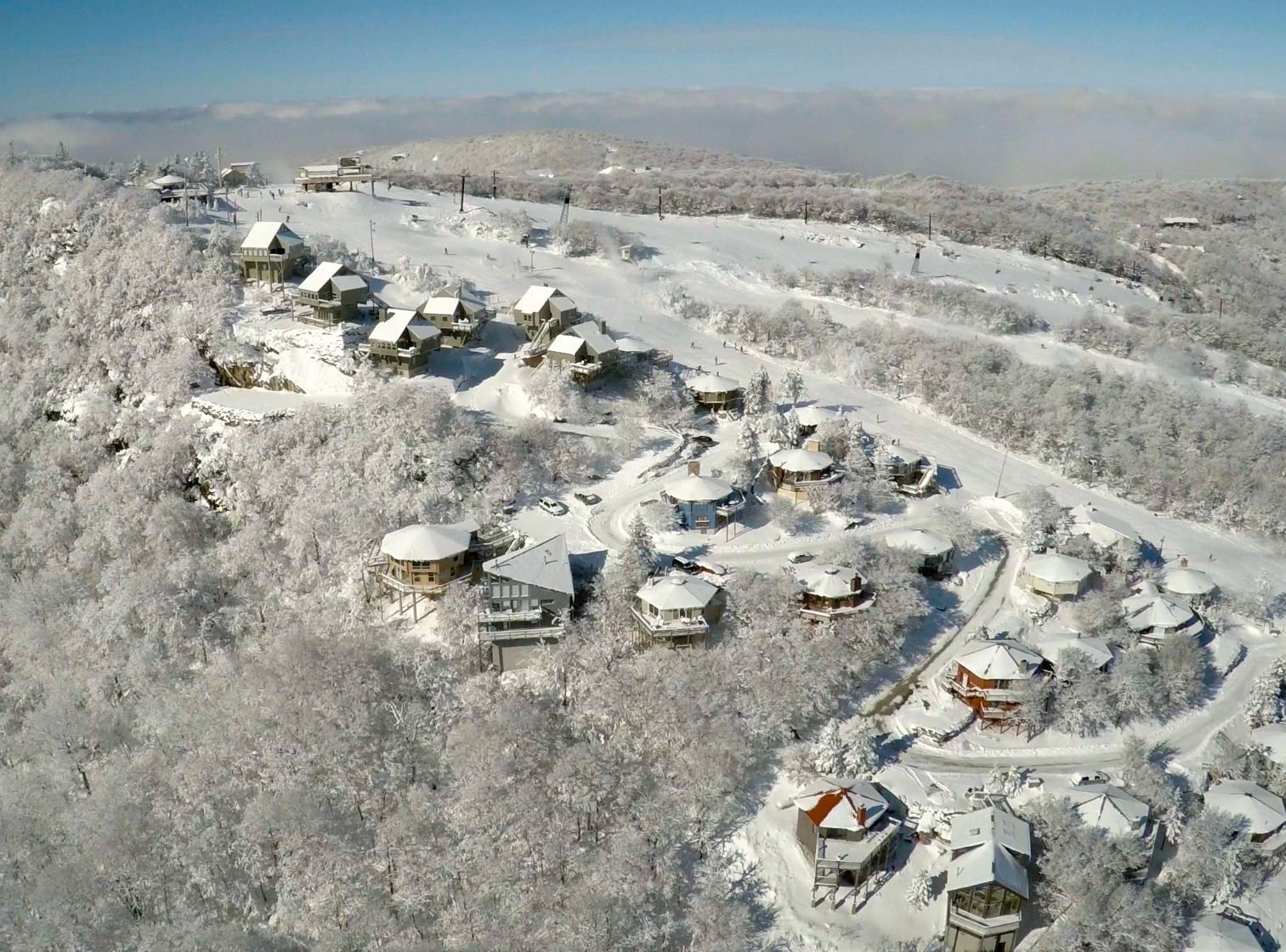 Last weekend I was reporting and sharing photos like the one to the right (from up at Beech Mountain – you can CLICK the photo to see a great, enlarged view).

Conditions were in near-mid-season form. When I was doing the FirsTrax over the Thanksgiving to Sunday Holiday we were seeing lots of cold and snow and natural snowfall tallies that had already reached TWO FEET at Beech and 33″ up at Snowshoe Mountain and the WV ski resorts.

I turned the “blogging wheel” over to Kenny Griffin for the Monday-through-Friday period and what I get BACK is a bunch of resorts fighting early season conditions, a lot of wet-granular, and no more natural snow.

In fact a few resorts have shut down ski and snowboarding ops and conditions at some look something like late April or early May when there’s only pockets of snow laying on the slopes.

WHAT HAPPENED WHILE I WAS “AWAY”???

WET GRANULAR IS THE WORD FOR TODAY…and at least this morning it seems to be FOGGED IN everywhere I looked.

THAT SAID – HERE’S THE MORNING NOTABLES…

Wintergreen Resort – 47° – I’ve always liked the way that Jay Roberts, Betsy Dunkerton and the team at Wintergreen write a morning report. So this morning, I’m sharing their report as is:

Open this weekend for Skiing, Riding and Tubing with spring surface conditions.

Rates:  30% of MIDWEEK rates for today and tomorrow.

Surface:  Spring like snow with a 16-24 inch machine groomed base

Snowmaking:  Temps begin to cool back down tomorrow allowing for some overnight snowmaking hours during the work week and the possibility of a little natural snow.  This week’s forecast is way better than the week we just went through…  Like all of our ski area friends in the Mid-Atlantic Region, we just need to “tough it out” through this mild pattern and be ready to go big when winter returns mid-month.

(I could NOT have said it better. No, REALLY, I could not have.)

SNOWSHOE MOUNTAIN – Their snow report hit my INBOX at exactly the same time that I was ready to research and post their report. It’s all about timing!  Snowshoe has 13 slopes and trails operating for day sessions on a wet granular base of 27-56″. They wrote, “Demo Days will be going on today and tomorrow from 9am – 4:30pm. Check out all the best brands in the Village and test out the latest gear. This afternoon, Mountaineer Parks presents the first contest of the season. See you on Skidder Slope at 3pm for the Jump the Gun Early Season Rail Jam!”

Appalachian Ski Mountain – 42° – 14-42″ (represents an 8″ drop in base over the last 24-48 hours) but they actually look pretty darn good on the main part of the mountain, which shows you how great a start we had in November.  App is 100% open with everything looking good and they have 2 terrain parks operating as well. App is open for day and night sessions.

DON’T FORGET that App is celebrate their 53rd year of family fun as they roll back lift tickets to 1962 prices! You can ski TODAY OR TOMORROW for only $5 Ski Tickets for the Day Session (9am-4pm).

I don’t know if this photo is of old Jim Cottrell of the French-Swiss Ski College at Appalachian but Jim’s still at it and looks about the same with maybe a few more wrinkles! 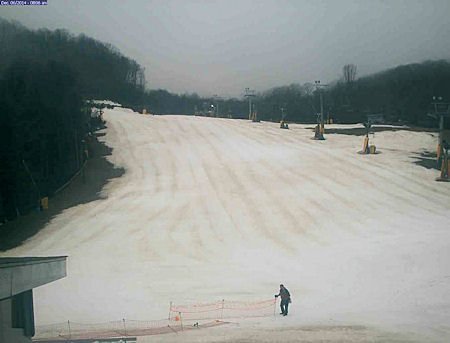 Cataloochee Ski Area – It’s 47° over at Maggie Valley this morning and while the snow looks plentiful on the base cam, it HAS taken on that discolored, “January THAW” look to the snow. Cat uncharacteristically has not updated the snow report on their site, however after looking at the good coverage on the trails (via the webcams) I’m certain that they are operating for DAY SESSIONS only today and Sunday on a base of 22-34″ with 9 slopes and trails – served by 3 lifts.

We want to remind you guys that TODAY and TOMORROW (Saturday and Sunday) marks Cataloochee’s 2nd Annual Cataloochee Ski & Snowboard Swap at the ski area.  Sign up to bring your gently used winter clothing and used hardgoods to sell on both Saturday and Sunday, or shop for the best deals of the season on used equipment.  For more information, visit their website at www.cataloochee.com/swap.

Also, on Sunday, December 7, is Can-U-Ski Food and Coat Drive for Haywood Christian Ministries.  24 cans of food or 2 winter jackets of any kind will get you your lift ticket on Sunday for free, it’s a $62 value.  Cans and coats should be dropped off at either the Ghost Town parking lot at the bottom of the hill or at Cataloochee Ski & Sports and you will receive your lift ticket there.  Those persons needing to rent equipment and get lessons will pay for those items at the ski area when they show their lift ticket.

Massanutten Resort – 47° – After warm and rainy weather throughout the week, they will have Diamond Jim, Southern Comfort, and Lower Showtime open for this weekend. They wrote, “We will make snow as temperatures allow.” That’s 3 slopes open for today.

Bryce Resort – 46° – Today’s snow report “TITLE” for Bryce could be, “Oh Brother, Where Art Thou!?!?” or “Bryce, Bryce, Baby!” – Bryce’s website shows NO update and bear in mind that they were closed this past week. HOWEVER, we made the effort for you guys (and them) and found out that they ARE OPEN today for DAY SESSIONS on 4 trails and the have Snow Tubing open as well. They’re reporting machined groomed conditions on a base of 20-30″.

Ober Gatlinburg – It’s a Spring-like 56° over at the Smoky Mountain ski area today. They are still playing on the snow tubing hill but ski and snowboarding ops are on HOLD until snowmaking weather returns.

WINTERPLACE RESORT – Looked GREAT this past weekend but they are now closed for ski and snow ops and REOPENING Friday, December 12th.

Wolf Ridge Resort – Well Martha (not sure WHY I chose that name) THEY ARE ALIVE over there at the Mars Hill, North Carolina ski resort! We’ve fielded EVERY SORT of rumor over the last two weeks and we’ve made some calls over there and according to one regular reader, “Things look like they are closed up for the duration”. NOT SO FAST GRASSHOPPER! They posted this message on their website on Friday, “It is our hope to be able to start making snow early in the week with a targeted opening date of Friday, the 12th. We are looking forward to a great season and hope to see you soon!”

We DO have a little cold and some chances at SNOW next week, so we’ll be hoping right along with them!

Wisp Resort – Re-Opening Saturday, December 13th – One look at their webcams will paint the picture

Sugar Mountain – They’re calling Wet Granular – Loose & Frozen Granular and to be honest our buddy Joe Stevens would call that a marketing “win”. According to Joe, ski areas never close. They “cease ski and snowboarding ops”. It never rains, it’s, “under-developed snow”. So snow is never wet, “it’s loose & frozen”. There’s plenty of snow coverage at Sugar and they are open for day and night sessions with 9 slopes and 3 lifts. Tubing and ice skating are open as well.

The Homestead Resort – NO REPORT.

That’s about it for me today. I DO HAVE some exciting news to share and will do that a bit later this weekend or Monday. If you want to comment – drop me an email at [email protected]