An Awesome Weekend of Skiing this Weekend! 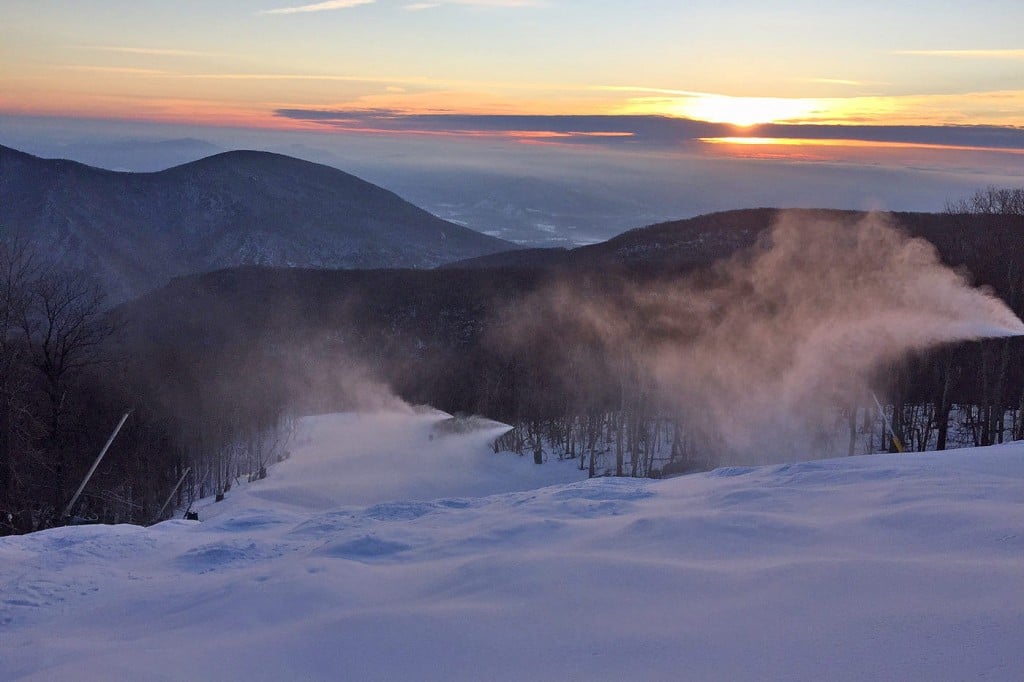 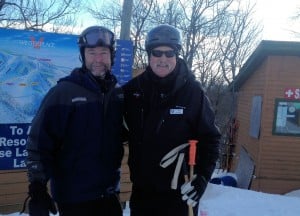 SkiSoutheast.com Columnist and our buddy, Joe Stevens posed with Winterplace’s Tom Wagner at the top of the mountain on Friday.  Joe was back on his board after missing two seasons due to a hip replacement. He reported this morning that he was “a little sore” but admitted that he didn’t overdo it on his first time back on the mountain. Against doctor’s orders Joe runs marathons with his son Christian…so that hip is getting a workout.

January’s Weather Was a 180° Change from November and December…

January has been a snowy month and even better – it has been a cold month that has allowed the snowmaking crews at every resort in the region to build some really deep bases. We have not had the typical January thaw week. Then again we had that for nearly the entire months of November and December, right?

I was up at Beech last night and man were they and Sugar blasting a winter storm of their own with the snowguns blanketing their entire mountains. We hiked up to the ridge-line above Beech and caught the “aerial view” of snowmaking that appears at the top of this post.

To illustrate JUST how cold it has been, Sugar and Beech have each picked up ALL but one inch of their natural snowfall on the season in the month of January. That’s 28 of 29″ for Beech and 25″ of 26″ for Sugar.

Canaan and Timberline Resorts have seen 49.2″ of snow in January and that’s 49″ of the 53″ total they’ve seen this season to date.

Bear in mind that the Virginia ski areas had only seen from ZERO to 1″ of snow on the season prior to the blizzard that dumped all that snow up there.

Baby, It’s Been COLD outside!

The better indicator of just how great January has been in terms of cooperating with the ski area snowmakers is the temperatures that have allowed snowmaking crews to blanket the trails. As an example, Beech Mountain has been able to make snow on 27 of the last 30 days in the month of January. THAT makes for some great conditions. 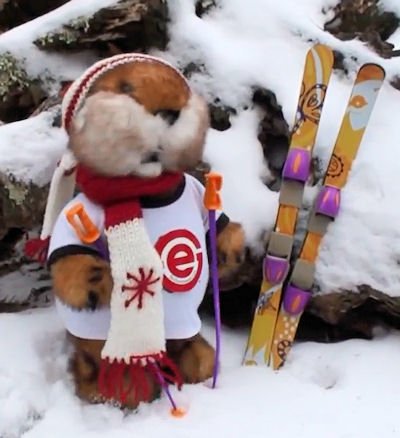 SkiSoutheast Si will be providing his Groundhog Day forecast Tuesday! We cannot IMAGINE WHY he will forecast anything but a snowy end to the season that should last into April!

So January has been as good as November and December were bad. We can hope that February, March and early April are equally as sweet.

I haven’t heard from Brad Panovich in the last few days, but Groundhog Day is Tuesday and all I know is that we are forecast to see some under-developed snow (that’s rain for you newbies) on Tuesday and Wednesday.

So there’s a likelihood that fuzzy, Punxsutawney Phil’s forecast will be for an early Spring since he may not see his shadow with the cloudy skies on Tuesday.

SkiSoutheast Si (our own version of the critter) WILL see his damn shadow even if we have to create some artificial sunshine to chase him back into his cave. We’ll see how all of that turns out early next week.

WHAT DO WE KNOW ABOUT THE BLIZZARD OF LAST WEEK…

That was one impressive snow storm that dumped up to 44″ of snow in some locations of Virginia and West Virginia. I’m sure that a lot of you have seen some of the videos that were provided with timelapse videos of the snowfall.

Here are the two, most impressive that I saw:

This first one is unreal and took place in Purcellville, Virginia.

This is the Martinsburg, WV timelapse:

Here’s the Virtual Tour this morning… 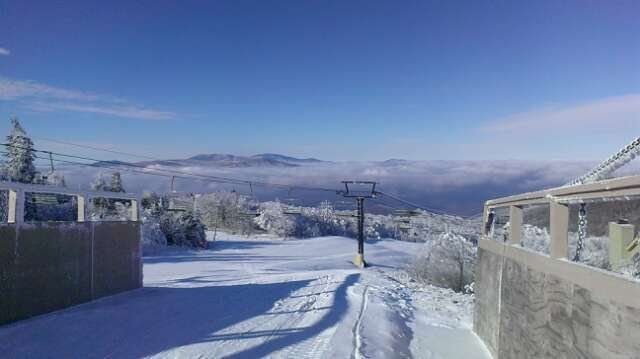 Oz Run opens for the first time this season

Beech Mountain Resort – 100% OPEN now that Oz Run opens today! The ever popular Oz run opens for the first time this season.  Oz Run was just named the best ski slope in the 2016 Best of the Blue Ridge Competition.  This intermediate slope is a hidden secret and a local favorite. Their awesome (and new) tubing hill is open as well as ice skating. So all 15 trails are open.

Canaan Valley Resort – They are reporting another 1″ of new snow, 2″ in the last 48 hours and 53.1″ on the season. Canaan is also NEARLY 100% OPEN with 46 of 47 trails open. They are reporting that they are only open for days sessions. ALso 30KM of cross country terrain open with 12-16″ of snow! Ice skating open as well.

Winterplace and Timberline each have what is normally their terrain park trails open right now, but neither with terrain park features. Not sure what that’s about…but they are open for skiing and snowboarding.

Snowshoe Mountain Resort – 49 of 60 trails open with lots of terrain parks, snow tubing and snowmobiling all open. Snowshoe also has Upper Shay’s Revenge open which in my own opinion offers the best, steep, glide trail going from Upper Shay’s over to Lower Cupp Run. I personally have that one on my favorite list of trails to ski each season.

Timberline Resort – 32 of 39 trails open. 17KM of cross country skiing trails open with 12-16″ of snow! Bear Claw trails are open with no features. Timberline received another 1.8″ of snow in the last 48 hours with .8″ of it coming in the last day. 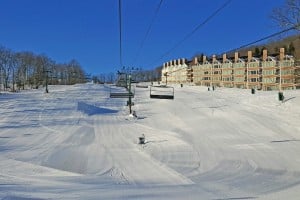 Some amazing groomed corduroy at Wintergreen on Friday morning. Click to enlarge

Wintergreen Resort – 100% OPEN with 24 of 24 trails. They did make snow overnight and have terrain parks and tubing all open for your Saturday and Saturday night enjoyment.

Massanutten Resort – 100% OPEN with all 14 trails and an equal number (14) of lanes open for tubing. There’s lots of snow still on the ground from the 29″ of snow that fell last weekend!

Bryce Resort – 100% OPEN with all 8 trails, snow tubing and more. Bryce and the Basye/Bryce Lions Club are hosting a grilling operation at the foot of the ski slopes Saturday and Sunday to help support local area scholarships and charities. 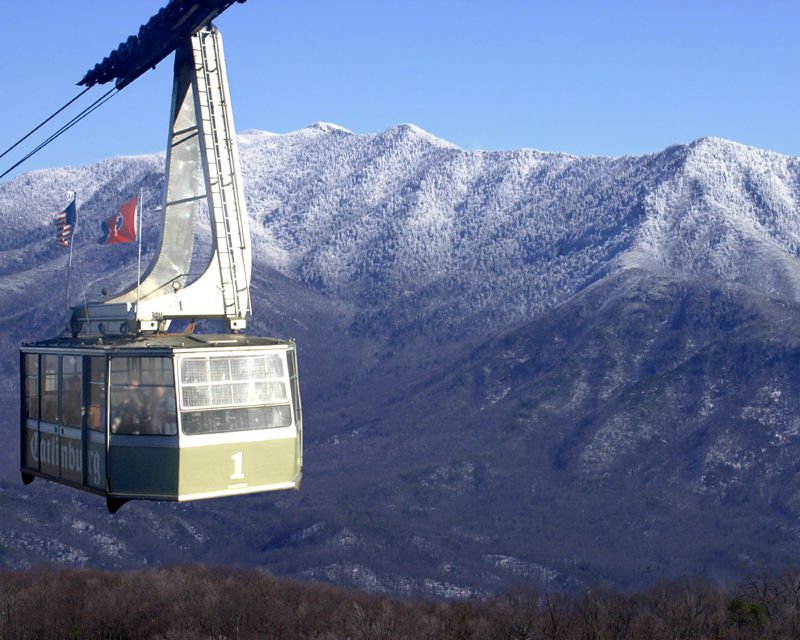 Ober has an awesome bit of transportation from downtown Gatlinburg up to the ski area. Click to enlarge.

Ober Gatlinburg – Open with 8 of 10 trails, snow tubing, ice skating and mountain coastering all open for your pleasure. Great conditions at the Smoky Mountain ski area. Guys if you haven’t skied at Ober before, you really need to check this little gem out. The aerial tram lift from the downtown of Gatlinburg up to the ski resort is worth the trip by itself.

Wolf Ridge Resort – 100% OPEN with all 15 of the original trails open. Snow tubing and terrain park are open as well.

Sugar Mountain Resort – 100% OPEN with all 21 trails, snow tubing and ice skating all open. TODAY would be the day to go ride Gunther’s Way with some awesome grooming.  Sugar invites you to visit and listen to The Johnson Brothers from 4:00-6:00pm in the cafeteria. NASTAR today and Sunday on Oma’s Meadow at noon. No Snowmaking today.

Wisp Resort – 27 of 34 trails open with ice skating, tubing, mountain coastering and more all operational for day and night sessions.

That’s going to it from me today. Enjoy your day. If you’re lucky enough to hit the slopes today, you’ll be doing it with temperatures into the 40s today and with NO SNOWMAKING!