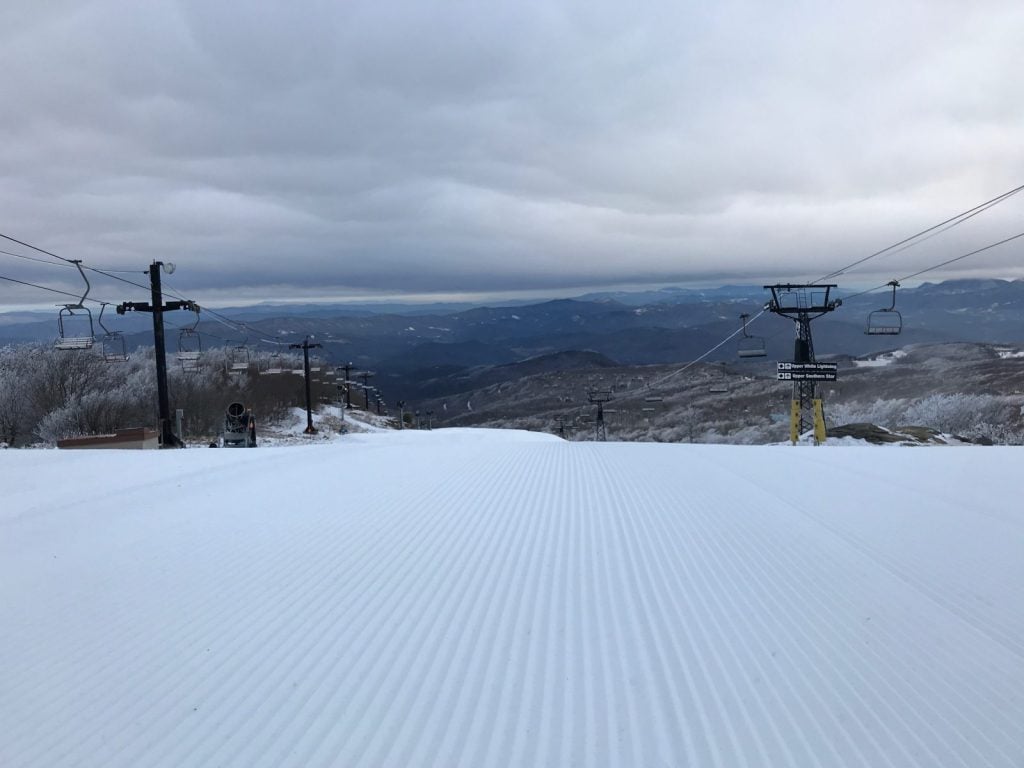 Temperatures are mostly in the teens with some single digits this morning and the snowguns were blasting away to add base depth where needed. 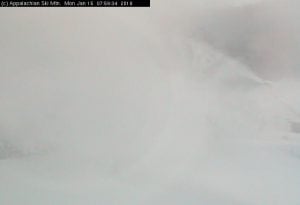 Appalachian had a blizzard going this morning! Click to Enlarge!

I watched this morning as Appalachian Ski Mountain was inundating their slopes with a manmade blizzard like really only they can create on that focused area. While that blizzard was dumping manmade, fine, powder on their slopes, they also were running two groomers up and down the mountain. When they turn those fans off just prior to opening the slopes to their visitors, it must look like a crystal ball as all of the previously shaken snow settles to the floor – revealing that pristine corduroy. Man I wish I was there…

You could ditto that for all of our mountain resorts this morning. As I toured the ski cams, man oh man do they all look sweet! Beech was making snow up top, and the base was groomed corduroy. Our own Kenny Griffin had wavered on hitting up Beech or Wolf this morning and the decision was made in time for him to be the first in the quad lift line at Beech Mountain. 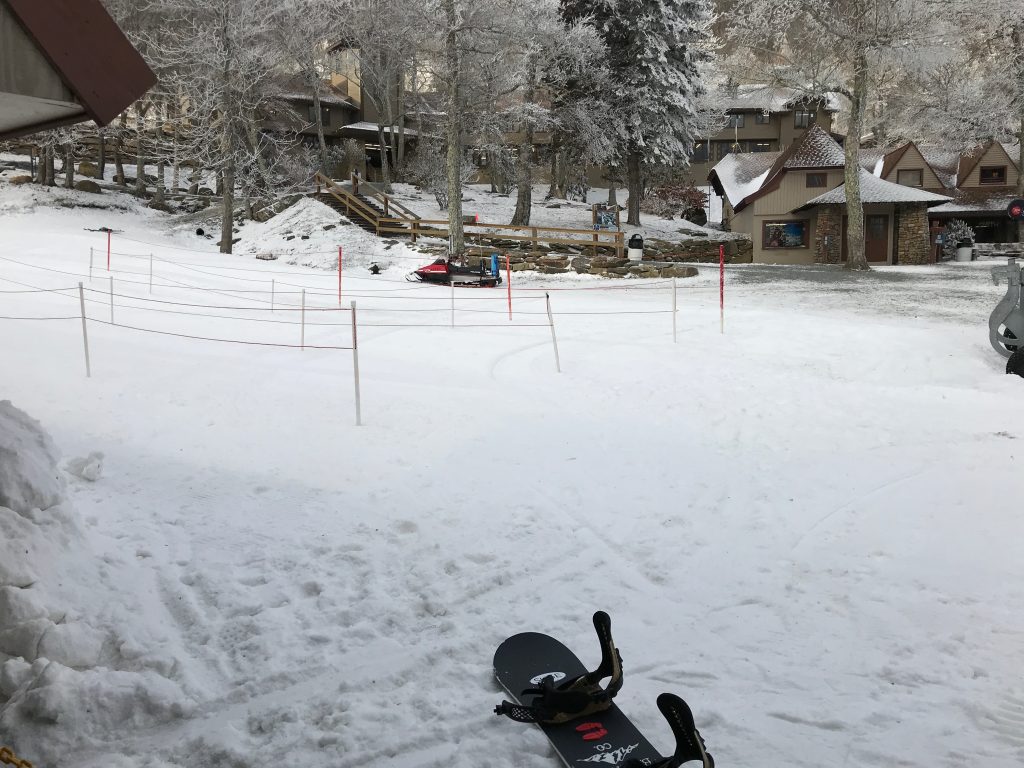 Kenny was first in line to hit up Beech this morning! 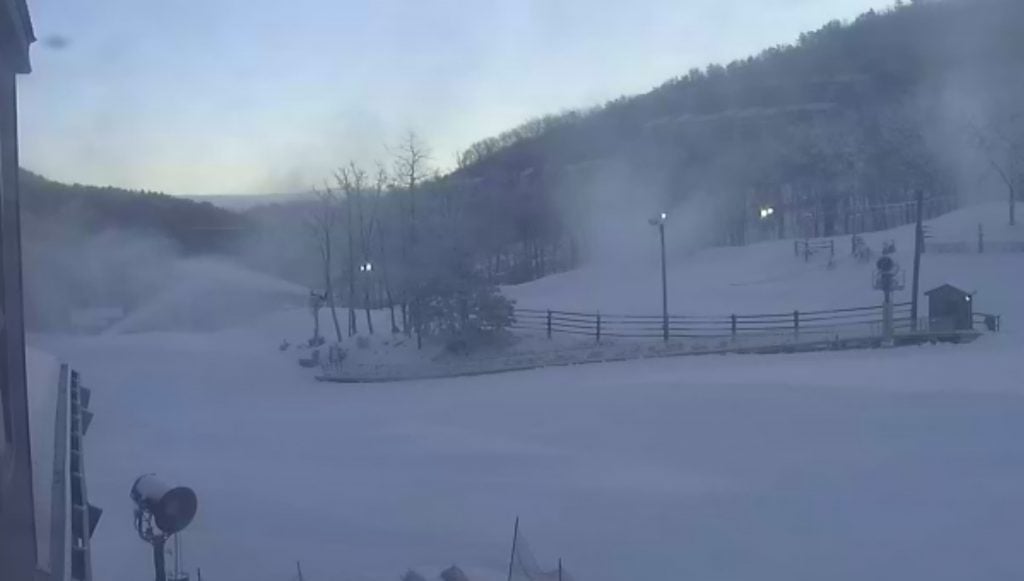 Cataloochee was bombing their slopes but they too will have the guns off during open sessions today except on Alley Cat. Massanutten was running groomers early and they too posted limited snowmaking, “We’ll hold on to snowmaking on Diamond Jim for a while this morning but all other day time snowmaking today will be confined to the CMB Terrain Park. Pacesetter will be closed for a park re-build. Possible snow storm on Wednesday?”

Shawn Cassell of Snowshoe posted, “Several inches of snow in the past couple days have left us with some amazing conditions, and mother nature has given us the temperatures to start putting more snow back on the mountain. Get out there today and throw some gorgeous, fluffy powder on the best trails that the East has to offer. We are expecting to see more powder in the forecast for the week to come. Timberjack and Mountaineer are open as ski trails without park features. Looking for some back country adventure? Hop in one our Polaris RZRs and take a tour as well as grab dinner at our back country hut! 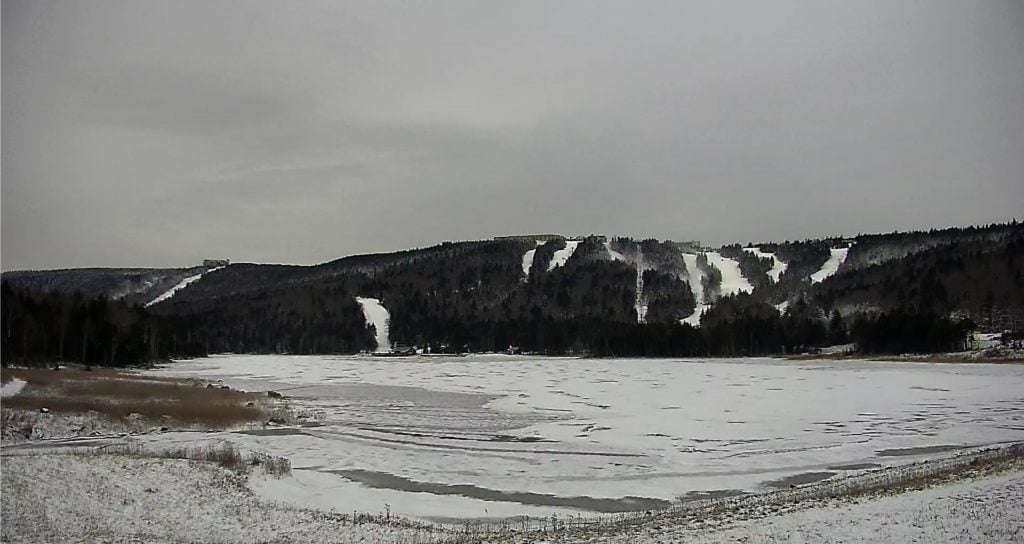 This basin shot never gets old at Snowshoe. Click to Enlarge!

Crowd was hitting Sugar early at 8:30am. 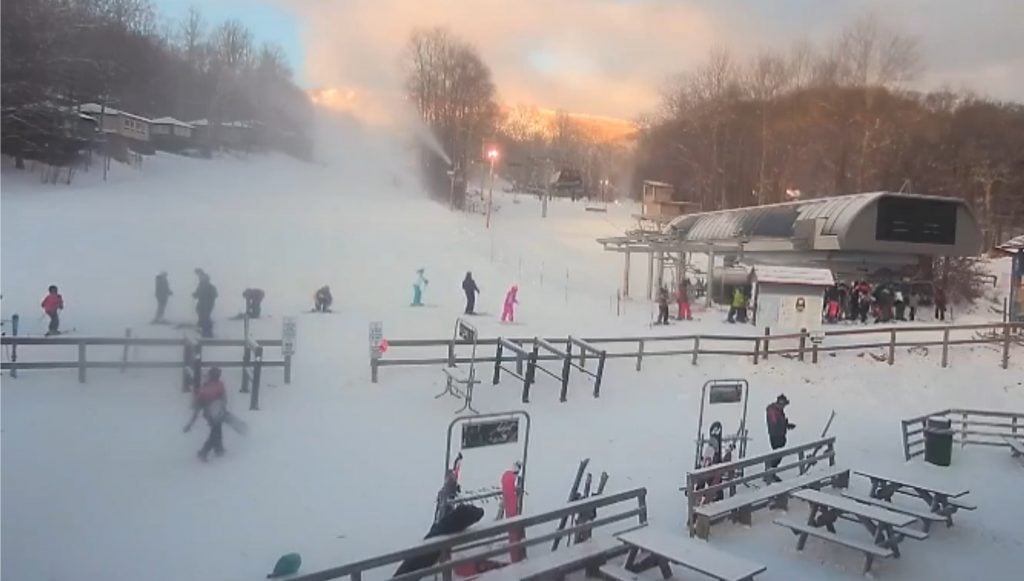 Sugar Mountain at 8:30am

About the only place that I saw that no snowmaking was happening was at Bryce Resort today. Regardless, they are in awesome shape with 100% of their trails open until 5pm today.

On Sunday we shared Joe Stevens’ comments about finding that OnTheSnow was no longer showing the Southeastern ski resorts in their navigation. A few of our readers chimed in.

Welcome to my frustrations when I worked for another mountain in the Southeast. No matter what was done we were always ignored. Now, a molehill in the Midwest? Big news. A ski area on a real mountain, “You guys even ski there?

I’ll finish up with one of my favorite stories. I was in an elevator at Mount Snow, VT with an employee of the resort. Making small talk, he asked where I was from. I received the usual response when I said NC, “You guys even have snow there?” I said “Yes, and I’m struggling to breath at this low elevation”.

Enjoy the rest of your weekend.

Mike, I actually used to follow (OnTheSnow) for years as they do have very nice content for those of us who are blessed to travel around and ski. They used to include the southern resorts but about the time that Vail bought them I noticed that our ski resorts were dropped from their front page navigation. I actually wrote them and they told me the same thing – just not enough room. When I wrote back that there was plenty of room on that page (with all the white space) I was told that there simply wasn’t enough interest to warrant the space. That answer didn’t make sense though because they do include the snow reports and reviews, you just have to hunt for it in the search bar.

Keep up your great coverage though, because Ski Southeast is the only place I can get my fix. Love the new writers too. David B.

FYI, the Southeast was never on the navigation shortcut list for OnTheSnow. When Mountain News bought EpicSki I was an active Moderator. I mentioned the omission to Heather early on. Got the same response that there was no room or priority for programming to make that sort of change to the interface.

The southeast ski areas/resorts are included in the OnTheSnow database. For instance, for Massanutten:

Needless to say the relationship between the few paid Admins for EpicSki and MNC was always a strained. I was a volunteer Moderator so didn’t know that much. But enough to know that MNC doesn’t really have much in the way of staff. MNC was bought by Vail a year or two before MNC made a pretty high offer for EpicSki. Presumably because Vail had picked “Epic” as for their brand name. Although the reason for the abrupt disappearance of EpicSki was the choice of Huddler as the platform back in 2008. The purchase of Huddler and subsequent shut down of all Huddler sites was directly related to the timing of the EpicSki shut down.

OntheWhat? Who needs them anyway?! I started following you guys back when it was just skinc and your hair wasn’t grey 😉 I was one of the reporters who would send dozens of photos that you would post. You had a guy named Chase who was helping you some. Back in those days, nobody west of the Misssissippi knew we even skied around here. You’ll love this story Mike but about a year ago I was skiing at Keystone and riding the chair early with a young girl. We struck up a conversation and found out we both graduated from ‘Cuse (that’s Syracuse for those not in the know) and she asked me where I was from. When I said Roanoke she asked me where I mostly skied. When I told her Wintergreen, Winterplace and Bryce, she said that she had a really good friend who ran a website that promoted those areas. We both had a laugh when I said SkiSoutheast. She said, “wow Mike gets around.”

I tell all my ski and snowboarding friends about you guys all the time. Who needs OnTheWhat?

Editor’s Note: Thanks Sammi. I actually remember getting a ton of photos from you. Great walk down memory lane. (I had forgotten about old ‘Chase’.) Pretty cool to hear about your story as well. I hear from Laura Parquette and our old brother-from-another-mother, Bill Rock occasionally. Good stuff. Thanks Sammi.

Challenged Athletes of West Virginia, in cooperation with Canaan Valley, has a stellar adaptive sports program with outstanding staff and volunteers. The goal of our adaptive program is to help people with exceptionalities gain exposure to the enjoyment of snowsports. Please contact the Canaan Valley Ski School to find out more about this wonderful program, or search @CAWVintheValley on Facebook. #CAWV #CanaanValley #AdaptiveSports #DefyGravity #skithetrees #SkiWV #WVStateparks 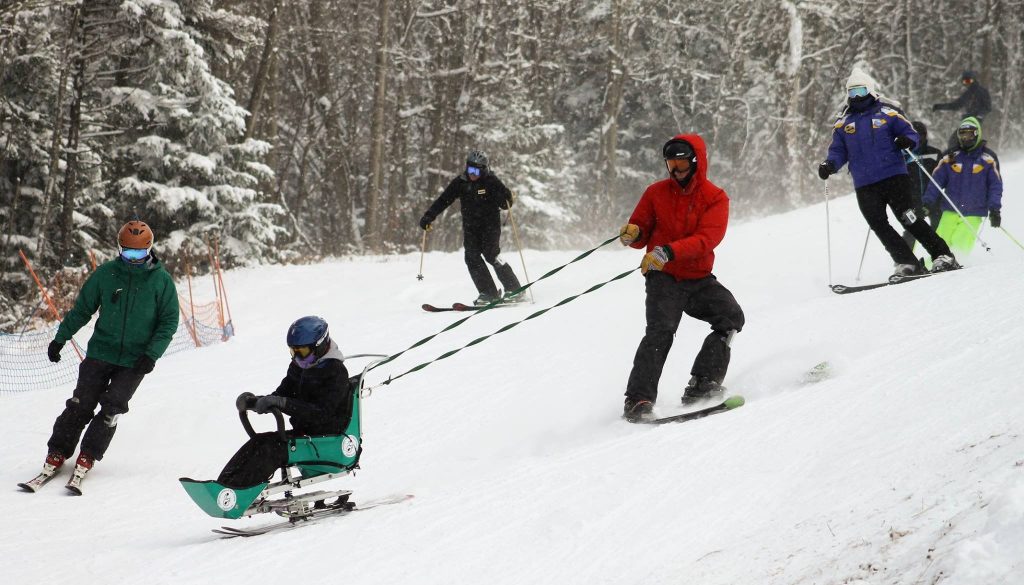 Snow in the forecast?!?! Awesome!

This is a VLOG post by Brad Panovich and not our normal Skier’s Forecast video. But cold and snow is coming in again. 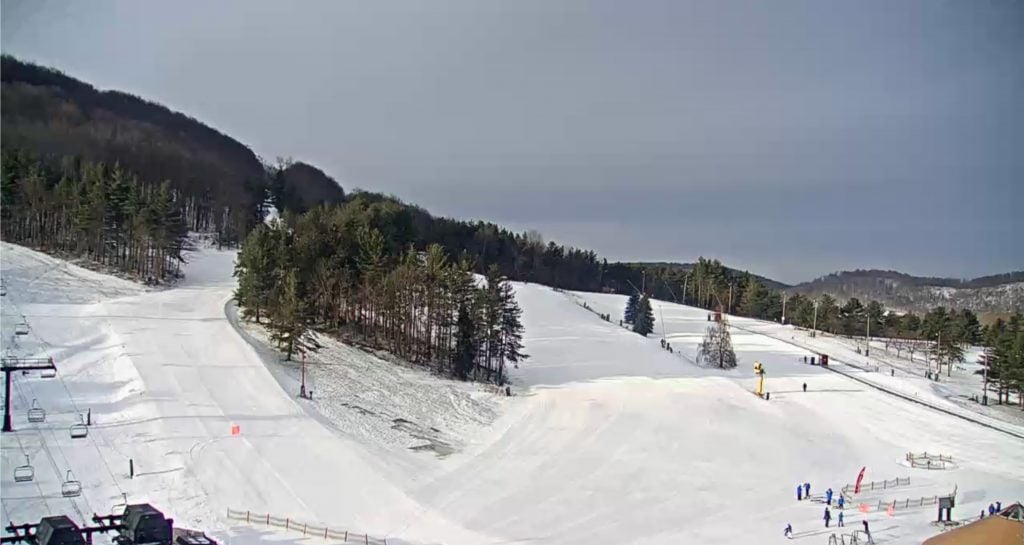 Nice shot of Wisp this morning. Click to Enlarge! 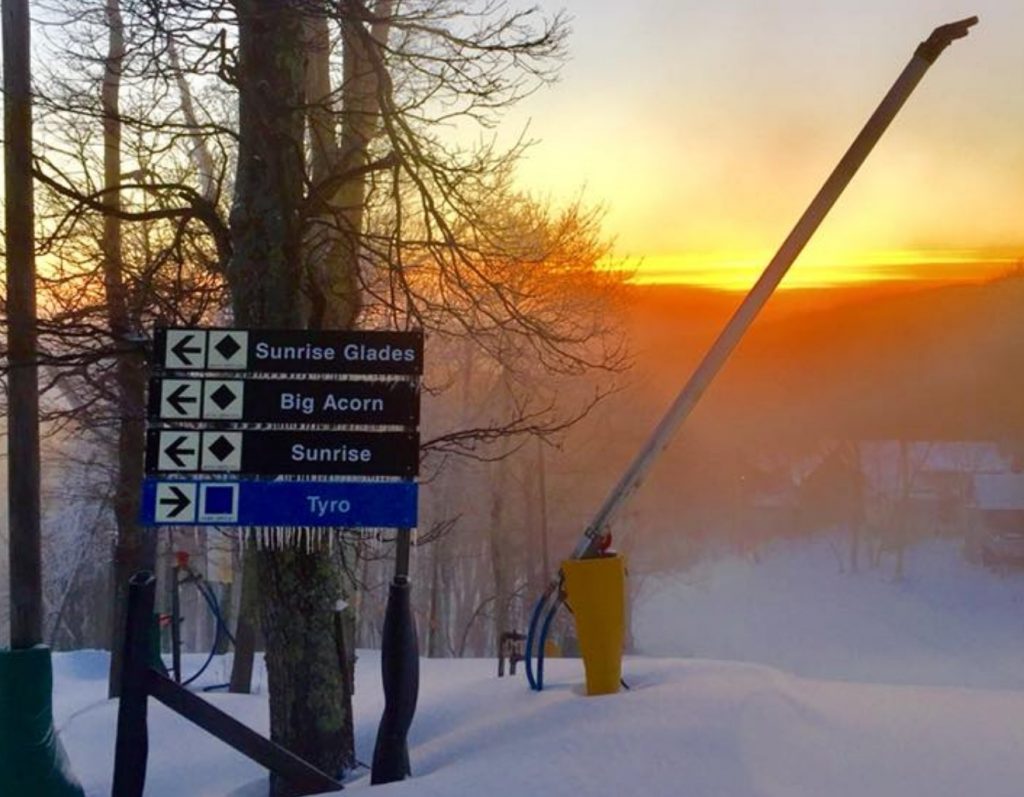 Wintergreen always has some great Sunrise photos! Click to Enlarge!