August Fog Count…and does it mean anything? 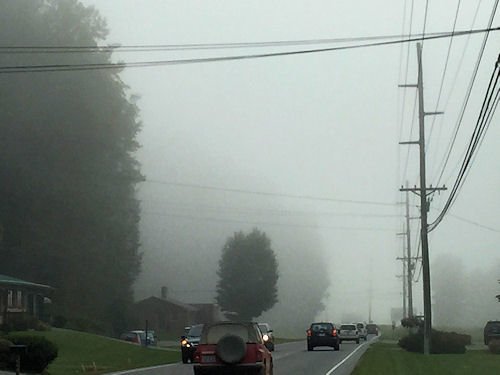 Well my snow loving friends…this is the unofficial beginning to the preseason before the real season as far as our people here at SkiSoutheast.com. Some of our followers have been emailing early this year as some of our major sponsors began connecting with us in July and early August. Readers began emailing me during the first week of August to update them on “How many foggy mornings there had been – up to that date”.

I tasked Matt Laws of our staff to stay in constant contact with Tom Payne and the crew at The Mast General Store as they have always been the official “bean counters” for the High Country. Also for the first time ever, I decided to get a “read” on the rest of our coverage area by connecting with a few of our more voracious readers and asking them to keep a count of fogs in August. Before I share some of the results of that outreach…

WHAT THE HECK DOES FOGS IN AUGUST HAVE TO DO WITH ANYTHING?

First, let me take a momentary “sidebar” and share the fact that this is our 20th season of reporting via SkiNorthCarolina.com and SkiSoutheast.com network of websites. When I first began reporting on “all things related to snow in the Southeast and mid-Atlantic” I was a bit of a newbie and often I was not as tuned in to all of the terminology as I am these days. For example, for the first seventeen or eighteen years I reported the fogs in August as folklore. Last year I was made to understand that observing fogs or the thickness of acorn husks or any other phenomenon of nature – as they apply to weather – is NOT folklore. It is weatherlore.

Weatherlore and folklore are two different things even though both are interesting and entertaining. Both have been around for thousands of years, probably dating back to the first human beings who looked at cave writings and forecasted a snowy winter for the ski resorts of 3120 BC.

Folklore are beliefs that are based on fear and superstition; while weatherlore is based on observations of the environment and the effects that weather has on insects, animals, plant life, birds…and of course, people.

For centuries…well before there were sophisticated weather apps…farmers and explorers planned their winters around how many snows there were in the month of August. If August mornings were clear, they’d plan their agricultural strategies to allow for a relatively snow-free winter. Well before TripAdvisor – explorers would gauge their travel plans the same way. If August mornings were blanketed with heavy fogs, they would postpone their excursions until Spring.

So back in the Autumn of 1996, I had the idea of developing a website that was geared towards keeping the skiers and snowboarders of the Southeast and mid-Atlantic informed about all things snow. Part of the initial foray into writing was – folklore…I mean weatherlore. One of my first stories was keeping a count of August fogs.

According to weatherlore, “For every fog in August, there will be a snowfall.”

SO HOW MANY WERE THERE???

That depends on who you speak with and where you live.

The OFFICIAL bean counter at The Mast General Stores is Tom Payne. SkiSoutheast.com staff member, Matt Laws was tasked with staying in touch with Tom and on August 31st, according to old Tom – there were TWELVE!

I couldn’t believe it so I called Sheri Moretz (who also works at The Mast) at Valle Crucis and she confirmed that bit of sad news. According to Sheri and Tom last year’s count was 17. When I questioned the accuracy, she replied, “Well we’re thinking that some of these storms will last a few days.”

Let’s see – twelve storms last 2-3 days each…hmmm that’s still not going to do it for me.

Maybe there was some sort of freak bit of “valle-itus” (see Valle Crucis is in a valley between Boone and Banner Elk – the Vale of the Cross).

I kept my OWN count this year (as I usually do) and I’ll admit to being AWOL a couple of weekend mornings when I was over at Watauga Lake. My count was 19 mornings with fog. SIX of those foggy mornings were technically fogs that hung over the waters as I was headed out for a morning kayak.

So if you’re keeping up – SkiSoutheast.com leads 19-12 (which is a score that I would gladly take for the South Carolina vs North Carolina football game tonight).

ALSO let me tell you that THUS FAR in September (ALL THREE MORNINGS) it has been foggier than I’ve seen it in years, with heavy, dense fog. So I’m going to take some liberties and claim that perhaps winter will last into late March and that these three consecutive mornings of heavy fog means that we’ll have a few more snows this winter. So, let’s go with 22 snows this winter. If you think about it, that’s a snow of some sort every 8-10 days or so. We’ve seen that many winters, right?

(Plus I wanted to reflect a 10 point victory…)

HOW ABOUT THE REST??

I reached out to five readers who have emailed me over the years asking about or sharing THEIR foggy stories. Only three have responded thus far.

Renee Sheggs of Slatyfork (near Snowshoe) wrote, “Mike, I have a chalkboard on my fridge and I live here in the valley below Snowshoe. Every morning as I fixed my kids breakfast I look out my window and I made a mark for each time I saw fog. I counted 17.”

I don’t know what to make of that since Snowshoe always gets more snow then any of us in the region, but there ARE only 31 days in the month.

Steven Anderson of McGaheysville, VA (home to Massanutten Resort) wrote, “Okay Mike, I hope this is the news you were looking for but we had all but six mornings that were foggy. Here’s to a great winter. See you on the slopes hopefully.”

So Steven made me do math! Since it’s early morning and for those without a calculator handy – that’s 25 foggy mornings.

Seems high to me but I asked and Steven answered.

I couldn’t help but chuckle when Mark Brandon of Mars Hill, NC (close to Wolf Ridge Ski Resort) answered. He wrote, “We had fog here every morning in August. That’s 30.”

Mark is a young man of few words and evidently he was educated at the same schools as President Obama since he evidently thinks there are only 30 days in August. (For those unaware – back in 2008, President Obama claimed to have visited “all 57 states”).

Sorry Mark. I’m going to have to claim that your report was tainted. You’re disqualified dude. No snow reporting for you this winter 😉 I could see Wolf Ridge getting 250 inches of snow if you were reporting. I’d bet Orville would love that though!

So here are some unofficial reports from around the area.

We’ll be checking in with some other weatherlore during the month of September and we’ll share our findings with you. Additionally THERE ARE NUMEROUS things that we should be updating you guys on pertaining to the ski areas themselves. Now that we’re officially into the Winter Preseason we will be updating the site every few days or so.

Sugar’s new lift is looking incredible (according to Sugar’s Len Bauer). Len co-coaches a soccer team with me and he can’t stop talking about it. I have some images to share and we’ll get to that next week. Beech did some major upgrades to the Quad lift and they will have a snow tubing operation this season. Snowshoe has done a ton of work around the mountain and I’m certain we’ll get an ear full of updates from across the region shortly.

“If the first week in August is unusually warm, the coming winter will be snowy and long.” (It was a hot August all the way through to the end of the month. So bring on the snow baby!)

“If a cold August follows a hot July, it foretells a winter hard and dry.” (It was hot in August baby. Yes!)

As high as the weeds grow, So will the bank of snow. (I will get you a photo of the weeds near my home. They are over three feet tall!)

The severity of Winter is determined by how far down the feathers have grown on a partridge’s leg.
(Anyone even KNOW what a damn partridge looks like. How long are their legs anyway? Feathers on legs??? Yuck!)

We are developing the NEW and IMPROVED Woolly Worm Festival website right now and it’s a bit premature to talk Woolly Worm…but it and the Sugar Oktoberfest and all of the other resort festivals will be here before you know it!

Do us a favor and share this website with your winter and snow loving friends. We appreciate your support and look forward to an awesome 2015-2016 Ski and Snowboarding season.

Until Next Time…
Mike