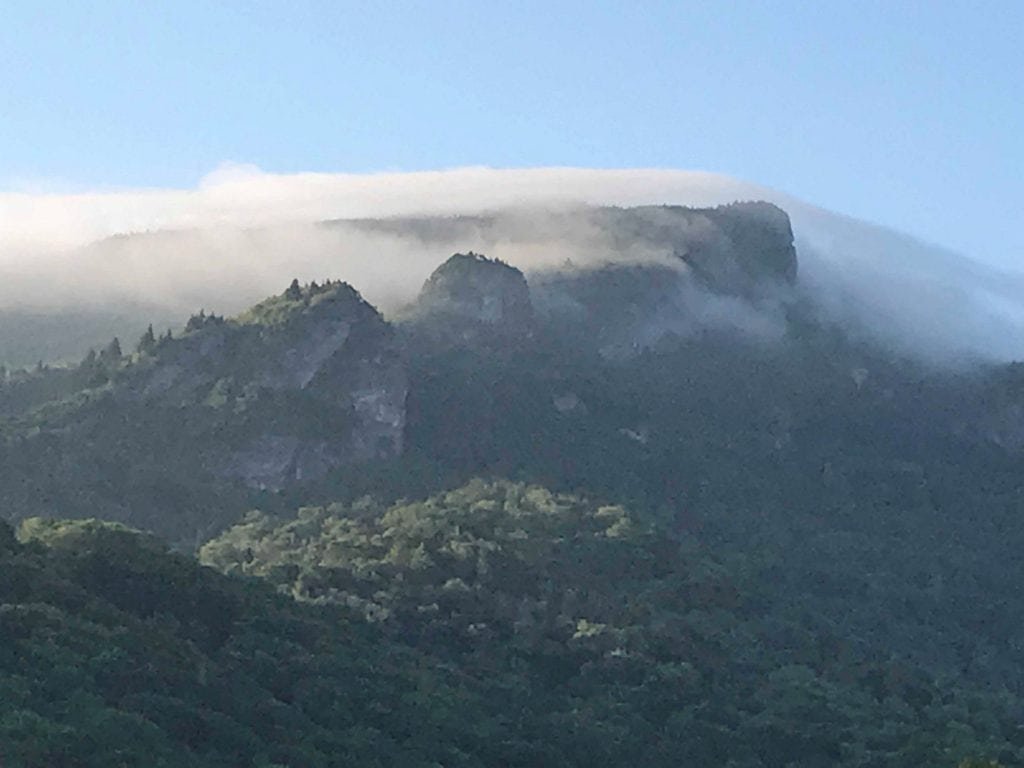 There seems to be a trend here as most every morning thus far in August there has been some measure of fog hanging around. I have been diligent to only report fogs of “significance”, therefore our own totals so far are 11 for 14 mornings. As I mentioned on Monday – I could really stretch things ever-so-slightly and call it 12 of 14. However, I’m going to hold back on that temptation and stick with the 11 of 14.

Several of our readers are now chiming in with their own tallies. I’ve heard from a few people from over in Mountain City, Tennessee (less than 20 minutes from our office) who have reported 14 of 14 foggy mornings thus far.

One of the more interesting shares I’ve received to date was from Tamara Rousseau who emailed me this morning with her own report from over near Mitchell and Yancey counties in a community called Red Hill – which is near Bakersville, NC. Tamara’s email fooled me for a second (that was her intention) as she wrote:

I receive quite a lot of emails and communications from news media all over the region and I will admit that I first read her email as “Fox News Channel”.

If you go and watch her Facebook video she did that purposely and she makes light of it herself.

Whhhhaaatttt! How dare she! Of course she meant to say that this all bodes very well for a wonderful, cold and snowy winter.

Another reader, Sean Mahoney, from over in Johnson City, Tennessee wrote and emailed this cool photo:

It was crazy foggy in Johnson City this morning. Thick! Also, we were up at Snowshoe a few weeks ago and got a cool pic. The largest lawn mower in the southeast. LOL Snowcats are lawnmowers also!

It was mowing Cupp Run before the Downhill Nationals.

I Captured Some Nice Imagery as Well!

In addition to the header photo of this story, here are some extras to share of this morning’s conditions.

Our recent shares of black bear photos have prompted some emailed to me. Unfortunately, many were dark or blurry, so I regret not sharing those. However, the following one brought back some great memories for me.

Sandi Hollis emailed this photo of model Julia Willis with Mildred the Bear (of Grandfather Mountain fame) in 1968. I remember this photo.

Mildred was always known as “the bear that didn’t know she was a bear”. If memory serves me correctly – Mildred used to run wild around the golf course and other scare the daylights out of people, but it was only because she loved “her fellow man”. She was often photographed being petted by children and adults visiting the mountain.

I should add here, that Mildred was not your typical bear. Don’t even THINK about getting close to any bear(s) that you might spot on your visit to the area. Actually feeding bears is not only illegal, but it is very, very dangerous.

So as of this morning, we’ll call it 11 for 14. Scroll below to see additional photos from this morning.

Email me YOUR “Fog News Channel” reports to [email protected]