Keep Calm and Wait Til Next Year 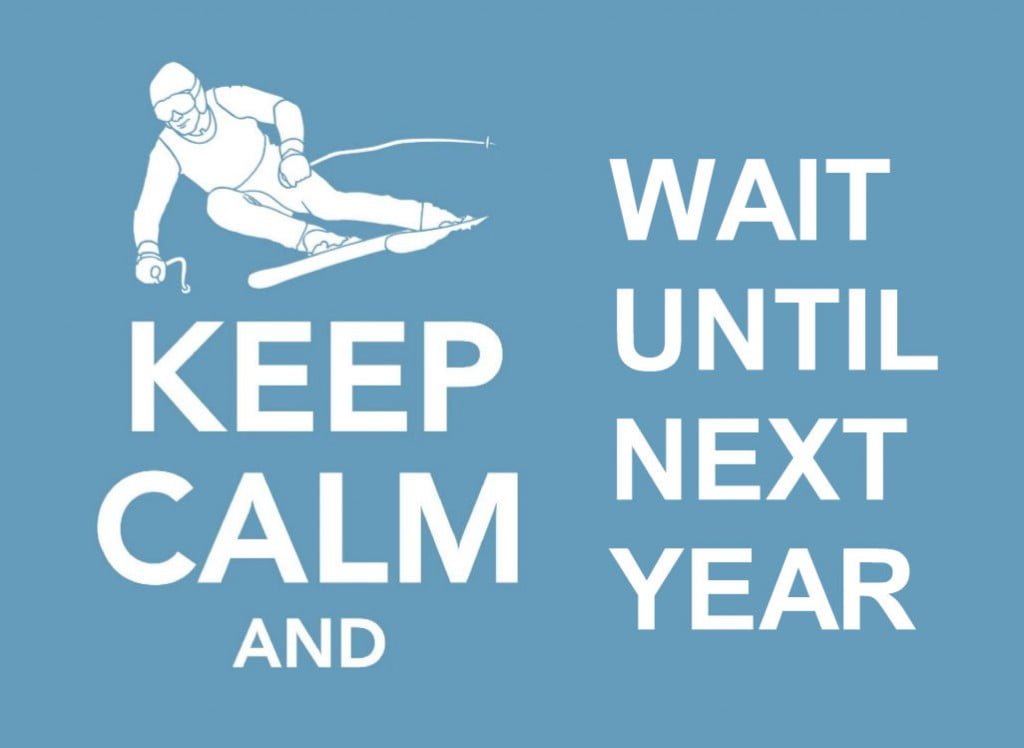 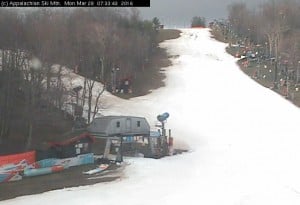 Okay so they didn’t make it to Saturday, April 2nd but they COULD HAVE. They DID go three days longer than any other ski area in the region. In fact, Appalachian Ski Mountain is/was the only open ski resort south of New York and before I receive a bunch of emails claiming that’s not a big deal – consider this: There are (39) ski areas south of New York state.

Only ONE is open today.

I received a couple of emails about App being the only ski area open on Tuesday and they kind of summed up what a lot of people “in the know” would think.

Joseph B from Statesville wrote, “I see appalachian is open today and things don’t look too bad. I just wonder why they’re open cause every time I look at the cameras there’s noone on the mountain. I’d be surprised if they stay open all week.”

Jack Smart (not sure where from) wrote, “I thought you’d get a kick out of a conversation that a buddy and me had yesterday. I told him that we ought to go ride today and he took a look at the webcameras and said DANG, APP LOOKS BETTER TODAY THAN SOME SKI RESORTS LOOKED IN THE MIDDLE OF THE SEASON.”

That was a good prediction from Joseph as App is indeed closing after today’s session and you can bet that it is definitely due to a lack of ticket sales and not the lack of snow. App could push some snow around and make it to April 2-3rd if they wanted.

Per Jack’s comments – unfortunately it WAS a crap season although if you look at things with a ‘glass half full’ mentality – we did get two good months of REALLY good conditions. It was definitely a season that could be described as a tale of two halves with half the season being pretty poor. The first quarter was almost non-existent; the middle two quarters (half) was really snowy, cold and awesome; and the last quarter was a challenge that saw many ski areas closing earlier than usual.

I’m not sure that we’ll ever get a straight answer out of any of the ski area’s bean counters as to just where this season ranks in terms of skier visits, profits and losses – but suffice to say that this season will not be in the top ten best. That is for certain.

…and for the LAST TIME this season…

As I was driving in this morning my Vail Alerts App went off (again) sharing the fact that Vail received 5″ of snow in the last 24 hours. Beaver Creek saw another 6″. I was thinking to myself how appropriate would it be to have one of those alerts go off as I was preparing to do THE LAST snow report and FirsTrax post of the season. If course I was THINKING that the last day was going to be this Saturday as App HAD planned to be open through Saturday.

Then I got the message that App decided to pull the plug on things later today.

SO – indeed it happened. It happened all November and December. As we were struggling for cold air and snow, it was dumping out west. Today, as we crawl to a season-ending halt – we get another kick in the groin as we’re figuratively now “down for the count”.

When we add any news or updates throughout the off-season we WILL alert our NEWSLETTER people first. We invite you to signup.

Previous Post
Time to move on
Next Post
Time for Deep Breaths and for Planning, Upgrading, etc.