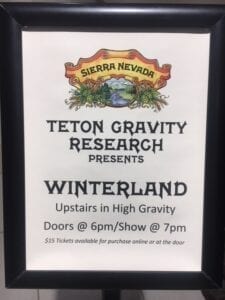 On Thursday, went to the premier of the TGR film Winterland, at Sierra Nevada Brewery. If you’ve never been to Sierra Nevada, they call it the “Biltmore of Breweries” . . . and for good reason. The Brewery is a Willy Wonka-esque beer factory where everything tastes like liquid gold (sans Oompa Loompas).

The film delivered high remarks from the audience, and everyone was stoked on the seemingly endless powder segments. Griffin Post (who had segments in Austria and Alaska) was in the audience, and did a Q&A, post-film. The funny moment was when Griffin asked how many powder days we get a year in the southeast . . . It was kind-of a reverse auction where the crowd started high, but finally settled on . . . (wait for it) . . . 3 . . . Cheers to more this year!

It was great to see Cataloochee, along with the following local resorts there in support of the film . . . 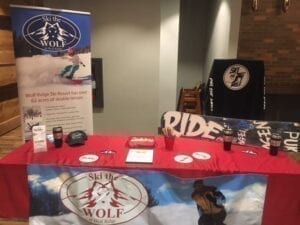 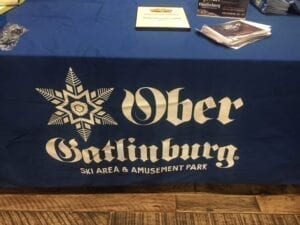 After feeling like a superhero ski movie watcher, I made the trek up to Appalachian Ski Mountain for opening day! App has an awesome tradition where on opening day, the first 100 in line get a free lift ticket . . . You guys are awesome! The coverage was fantastic with a 30-45″ base, and MOST of the runs were open. App opened with two separate terrain parks.

I made it my first day this year on Telemark skis. The terrain is excellent at App for “Teleing” . . . with wide, open groomers and shorter runs so that the legs don’t get too shredded.

I met a young gun who just moved here from California, had a whole Alpine Touring set-up, and like birds of a feather, we chatted on the way up the lift. He asked if he could Tele, with his AT set-up . . . I didn’t want to disappoint him, but it was a “no, young grasshopper” moment. He was still jazzed on NC skiing, and it was good to see some alternative “toys” on the mountain.

Yesterday, made the trip to Cat for a great morning session. These cold nights have firmed-up the snow very well, and Sunday morning was no different. Cat had Rock Island open which really makes for a nice run from just below the summit to the base.

Just as I was leaving, met a family who was having a parking lot picnic, around lunchtime. Saw that their daughter had a SkiSoutheast hoodie she received from last years Summit at Snowshoe. We all reminisced on how fun it was getting first tracks, and seeing the marriage proposal from Justin Harris . . . Good Times!