Another Ski Area Opening To Talk About! 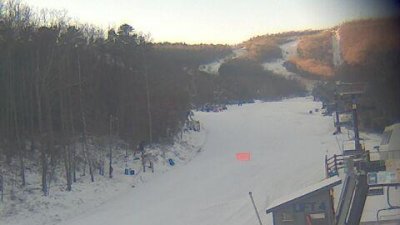 Well, we have another ski area opening to talk about this morning. Massanutten Resort in Virginia begins their 2011-2012 ski and snowboard season this morning at 9 am. They will be skiing and riding on three trails today. Nutten-To-It, Southern Comfort, and Lower Showtime will be open today. All you tubers out there will be happy to know that the tubing hill will be open today as well. Looking at the live camera out there right now, things look to be in pretty good shape. It’s cool to be able to see the chairs running and the groomers doing their thing on this cam. It should be pretty awesome to watch everyone go down the hill today. 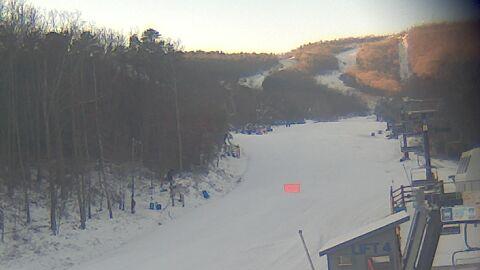 <<< The live cam at Massanutten this morning is showing some pretty good conditions.  It should be a fun day out there!

It’s nice to be able to talk about another resort opening. Things have been so slow around the region so far this year. It’s kind of a bummer because this is the first full year that I’ve had this job, and of course this would happen, especially after the past two seasons!

I’m a pretty optimistic person though so I’m enjoying the terrain we do have open right now. I made it out to Appalachian Ski Mountain last night and was treated to a great night session. App has seen somewhat limited snowmaking over the past 5 days or so but they have laid down a ton of snow when they could. All but two of the trails were open and each run had great coverage with not 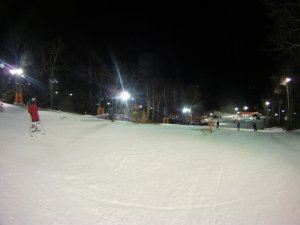 a bare spot to be seen. They had 8 or so terrain park features set up as well. Half of the fun for me when I go out there is just sitting on a bench at the top of the park and watching all of the younger kids kill it. I wish I could snowboard and ski like that when I was 12 or 13. It’s pretty amazing to see.

App had some >>> really good conditions last night and a pretty sweet park setup on Appaljack.

I’ll be headed back out there today, but for work this time. We’ll be installing a brand new web cam at the mid-station on Big Appal. Some of you will remember that there used to be a camera out there at the same location a couple of years ago. It was pretty cool and got a lot of good feedback. Well, this one will be even better. It will be exactly like the Sugar Ski, Bryce Resort, and King Street cams. By tomorrow you will be able to watch HD, live streaming video from the mountain. I’m pretty stoked for it!

So, today we have a total of 6 ski areas open across the region now. App, Sugar, Cat, and Beech are open here in North Carolina. They all are offering the same number of open trails as they were yesterday. Cat, App, and Sugar will all be offering night sessions.  As I already mentioned, Massanutten is open in Virginia now too.

Up in West Virginia, Snowshoe remains open today as well. They have added Knife Blade over on the Silver Creek side of the mountain to their list of open trails, bringing them to a total of 14. Here’s what they are saying…

"Good morning snow lovers! Our park crew was out pushing snow and rebuilding Spruce Glades last night. It has two boxes, two down rails and a jump. Silver Creek has expanded some more terrain opening Knife Blade and using Cascade lift instead of Mountaineer. We’re heading into a mild spell this week, but the cold temps return Friday night with chances of snow Wednesday-Friday night. Don’t forget Mountaineer Parks are teaming up with SPY this weekend for the first park event of the year, the Early Season Rail Jam! $10 entry, prizes, afterparty and MORE! Snowshoe is home to the best conditions and most terrain in the region with 45 acres and night skiing so when 4:30 pm hits you can just keep riding! Concentrate on some snow dances and cold wintery thoughts this week and we’ll see you around the mountain!"

Counting everything up, and we have a total of 49 trails open for skiing and riding here in the Southeast. That’s not too bad considering the crummy weather we’ve had so far this year. Unfortunately, the next week or so doesn’t look to be that great for snowmaking. Snowshoe, Timberline, and Canaan might be able to turn the guns on again towards the weekend and might even see a bit of natural snow, but for everyone else it looks like they will be skiing and riding on whatever they have right now. I’m not trying to bum anyone out, I’m just trying to tell it like it is. So basically, think cold!

That’s it for this morning. Keep checking back all week as we’ll keep you updated on additional openings this weekend (hopefully!). As always, remember to head on over to High Country Weather and High Country Web Cams for updated weather conditions, forecasts, and live views from around the region.