Another Light Snow Event On the Way 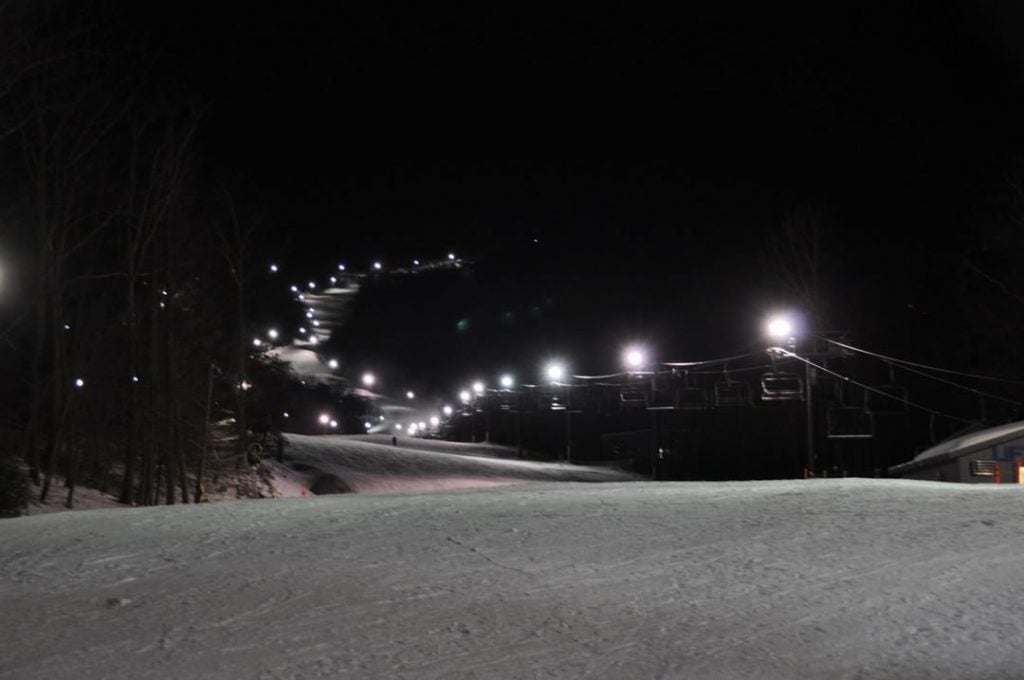 Another day, another weather system to talk about.  A light natural snow event is once again in the immediate forecast for many ski areas in the region.  A few to several inches of new snow will be on the ground by tomorrow morning at many resorts.  Snowmaking will also crank back up again tonight.  The lead up to the weekend doesn’t get much better.

Yesterday saw temps “soar” into the upper 30’s and 40’s at the resorts. Bluebird conditions after some natural snow and snowmaking made for a great day on the slopes.  The pic below, snapped at Wintergreen yesterday, has me jonesin’ for some corduroy. 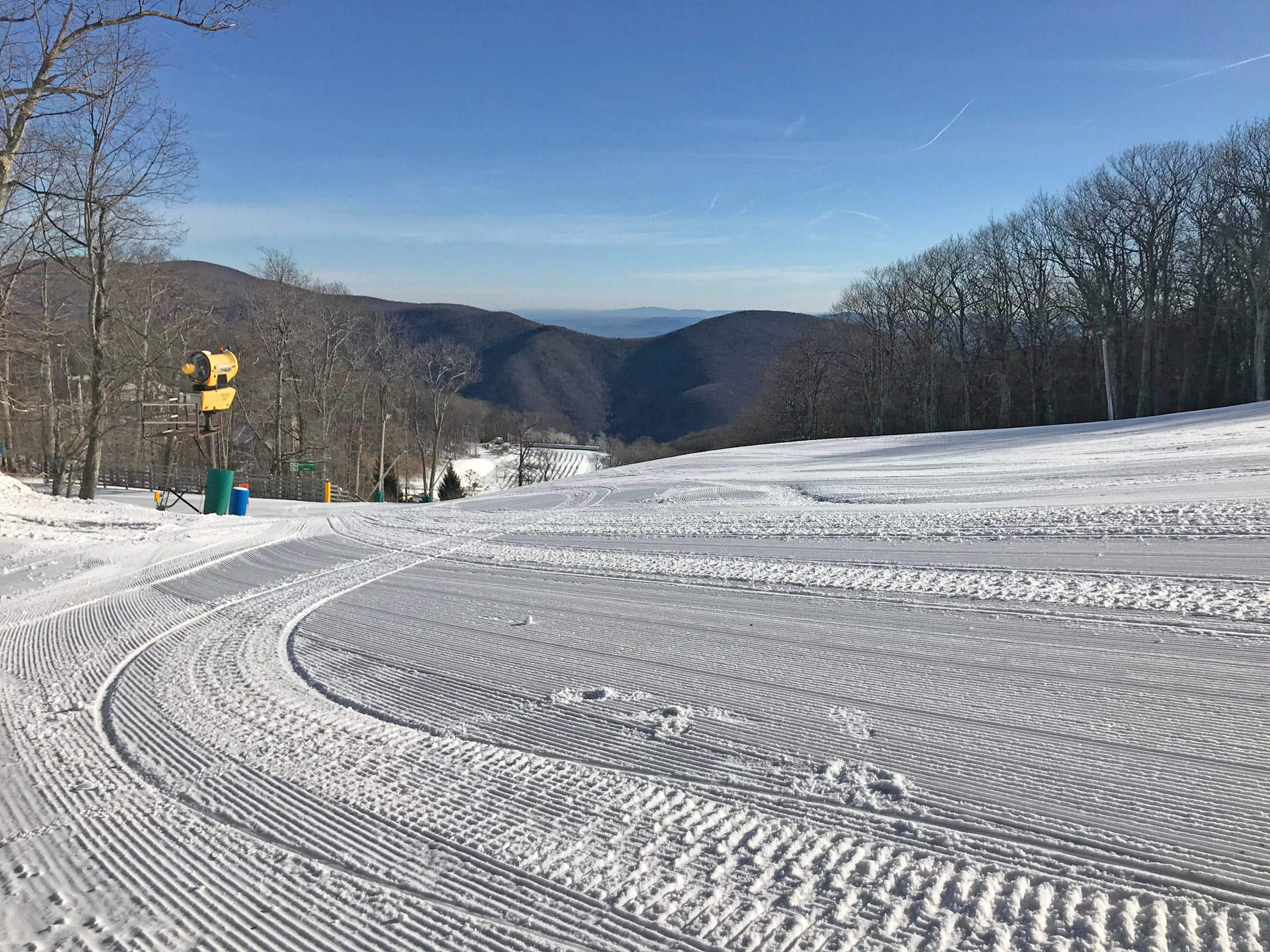 For one of the few times in the past two months, I couldn’t find a single ski area that made snow overnight.  That hasn’t happened too often in recent times.  The mild up is going to be short lived though as our active weather pattern delivers another round of wintry weather beginning later this afternoon.  Another cold front pushes through later today and while we will see some rain in the beginning, a changeover to snow as the evening and nighttime hours wears on will blanket many of the ski areas with a few inches.  Below is the current NWS snowfall forecast from now through tomorrow evening. 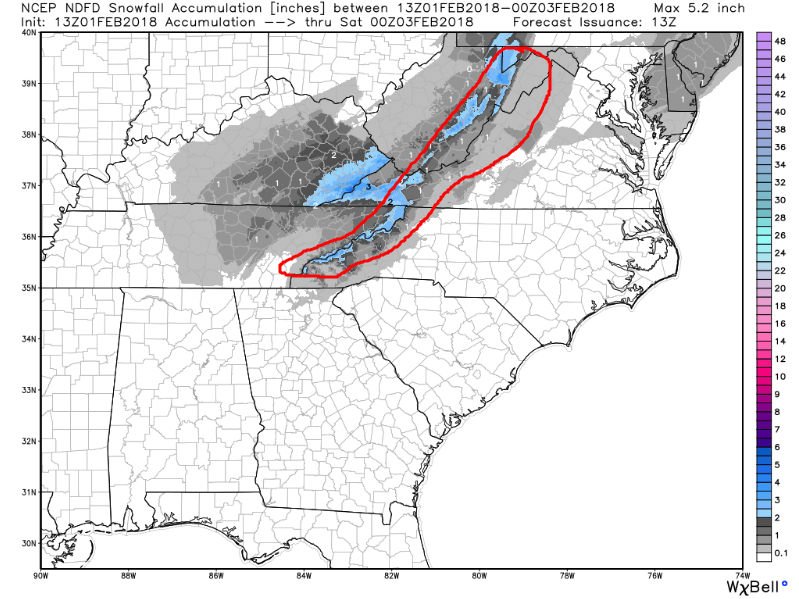 As has been the case all season, it’s another light to moderate at best system in terms of snowfall.  We really haven’t had a MAJOR snow event all year, but the continuous cold and snowmaking has definitely made up for the lack of them.  The general forecast is calling for 1-4″ for the North Carolina and West Virginia resorts.  Wisp is also included in that range as is Ober Gatlinburg in Tennessee.  Some spillover into Virginia might occur with a dusting to an inch possible for those resorts.

Look for the snow guns to turn back on as well tonight.  Once that happens we should see around the clock snowmaking into Saturday and possibly even Sunday for some ski areas.  Oh yeah!  The forecast is pretty crazy right now with yet another wintry weather maker on the way for Saturday night and Sunday.  I’ll talk more about that tomorrow as it looks like a mixed bag of precip right now.  Snow, rain, sleet, and freezing rain is all possible.  The National Weather Service out of Charleston, WV used the term “sloppy” to describe it in the forecast discussion this morning.  We’ll have to see how the forecast changes as we get closer.

Saturday is definitely the choice pick of the weekend.  The snow and snowmaking tonight with more snowmaking tomorrow should make for an excellent start to the weekend.  Time to start planning on where to go!  I’ll probably do a rundown tomorrow of where we stand in terms of open trails and what not.  Hint: things are looking good.

The Winter So Far

We’re into February now and are two thirds of the way through meteorological winter.  Now that January is over with, I wanted to take a look back at the month and see how it stacks up to average in terms of temps.  We all know it’s been rather cold, but how cold?

As usual, I used the Banner Elk (Beech, Sugar) and Snowshoe locations.  Out of all the ski areas, they had data that was closest in proximity and long enough in history.  The Banner Elk station has 112 years worth of data and Snowshoe has 43.

No records were broken in terms of the January cold, but the month did rank in the upper tier for each location.  The mild stretch a few weeks back really brought us down.  What about December and January as a whole?

Once again, we didn’t set any records for the period but it was one of the colder December and January’s for each location.  If you remember, the time period right around the new year was particularly brisk.  That cold snap actually did set a record in some spots for those dates.

What about snow?  Well, I won’t into detail too much on that but we are definitely behind.  We’re about 60% of the way through the season and totals are well below where they should be for this time of the year.  I believe Beech Mountain averages about 80″ per season and they currently sit at 35.6″.  You can do the math.  Canaan Valley is also below normal as David Lesher noted on his morning report today.  Canaan and Timberline sit at 77.9″ for the season thus far, which is about 15 inches below the long term average.

What does all of this mean?  Thank goodness for snowmaking and snowmakers!