The Chase is On 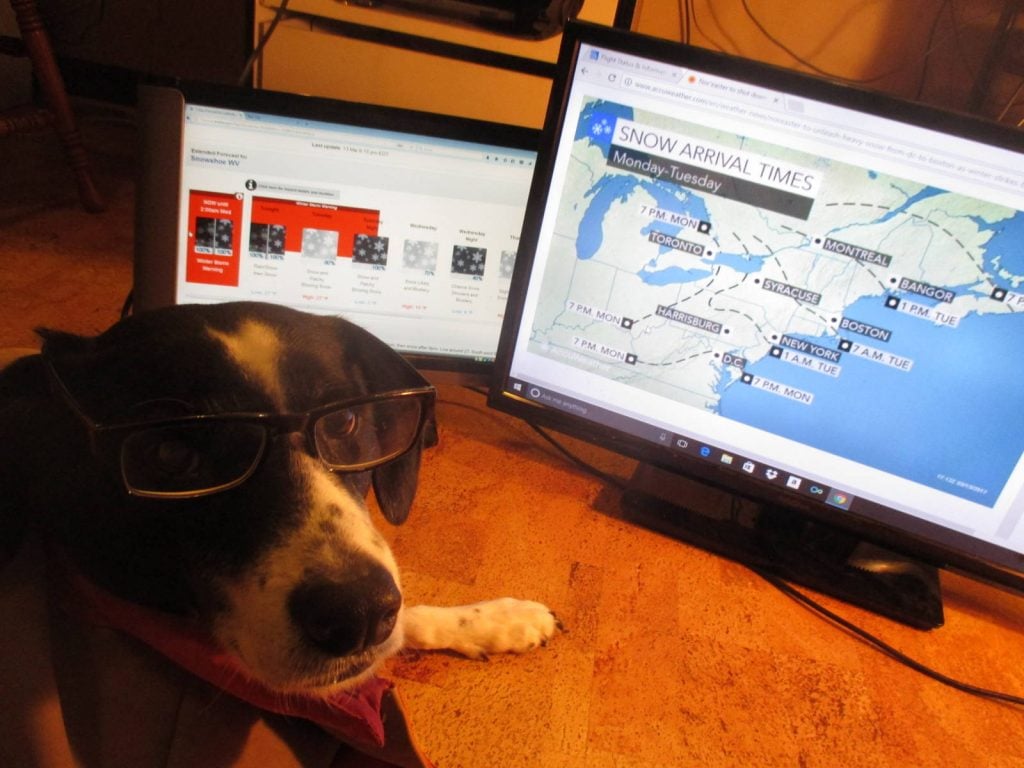 Apparently the season is not over, it almost feels like it’s just starting again from Carolina to West Virginia. You may not have been following the Southeast ski season thus far, through the various thaws, and rains, and frequent weather related calamities; so if you are just joining us, trust me when I say it has been grim. But suddenly March steps in to save the day.

As the cover picture indicated, my dog and I have spent the last evenings examining the maps and projected weather patterns. Actually I would choose to say prospects; tremendous respect for weather people, but I prefer to think of big weather events as at best prospective, since projections so often fall short. It’s less disappointing. I consider myself to be prospecting for storms like an old time placer miner; I watch the radar screens swirling around and hope some nugget may finally pan out.

Right now predictions are cold, snowy and deep. This is a time to get out, to drop your non-ski related obligations and make an end run around the crummy season that was. The Ski Southeast summit at Snowshoe was spectacular with friends and great conditions. At the time it felt like a season closer; but instead it may have been a happy harbinger of what was to come. Last weekend looked great in the NC highlands with fresh snow, and now we have a major storm in WV and points beyond, keeping big dreams alive.

I’ve moved from wrapping up mode to serious planning again. My plans are ambitious for this storm system because visualization is the first step towards realization. My long season meditating about deep banks of powder is finally paying off. My mantra has been: “It shall snow a lot and soon, and it will be particularly deep in the trees, and there will be no thawing and the sun will only break out briefly when I have beer and chili on the deck… oh and also.. People who want warm sunny days must pipe down and wait for May, may it always and ever be so. Over and out.” I grant you it is a little long as mantras go (the 182 cm length is really the most I’d recommend) and for some reason I am no longer welcome at the local Zen Center. But back to the storm, my plan is to leave quite early on Wednesday and be skiing at Whitegrass that evening. Then if totals are deep enough I may finally achieve the Tucker County Haute Route, which is to ride the lift to the top of Canaan Valley Resort (or skin up if the lifts aren’t running) and traverse across the ridgeline to the top of Timberline. Next I ski to the base, through their excellent glades, and then hitchhike back to my car but convince my ride (this is critical) to stop for another bowl of soup at the Whitegrass Lodge on the way.

What next? Well, just keep on rolling, perhaps to Seven Springs a little further north in Pennsylvania; then the roads may be cleared to upstate New York. I’ve never skied up there and they may have totals of two feet. Is this storm extending into Canada? My passport is up to date.

Oh dear, it’s all a bit ambitious I fear, a case of biting off more than I can chew perhaps, but why not? Better do it now, because ski days are fleet and fading out of sight. So I make plans. My plans are like models built by a ten year old boy; intricate in conception but glued together haphazardly then covered with dodgy paint work; still, that’s ok. The plan is sufficient, it is a thing unto itself; in my plan the snow keeps falling and I just keep skiing all the way up to Jay Peak until I conclude it may be time to return home and be responsible, or at least present. I do not expect this plan will ever be fully complete but I intend on making some parts real and the others will remain ready and waiting. Nothing can happen if we don’t dare to consider it and March seems like a good month to dream.